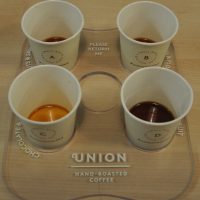 Welcome to the third of my detailed London Coffee Festival write-ups, covering individual aspects of the festival, ranging around subjects such as sustainability, kit & cups, and the coffee itself. If you want to know what I made of the festival as a whole, you need my festival round-up. Today it’s the turn of my coffee experiences, always a highlight of my London Coffee Festival.

But what do I mean by “coffee experiences”? These are the things that go around the coffee itself, things like coffee cuppings, roasting demos and coffee/food pairings. As I mentioned in my festival preview, the festival really went to town on coffee experiences this year. There were eight in all, ranging from practical, skills-based events such as Latte Art Live and Home Barista Workshops to pairing events, such as the Tasting Room, where you could pair coffee with chocolate, for example. There was also a Coffee & Food Pairing, consisting of a full three-course meal hosted by Grind!

Unfortunately, most of these events were pre-ticketed, and, by the time I got around to organising my festival, most of them had sold out. Fortunately, there were still some free events, including Union Hand-roasted’s ever-popular roasting demonstrations.

Let’s start with a look at some of the practical barista skills training that was going on. Friend of the Coffee Spot, Dhan Tamang, was on The Roasting Party stand, showing off his latte art skills. In between lessons (he was, as ever, very much in demand) I managed to grab a few minutes to hone my latte art skills. The key lesson? Pour with confidence: timid pouring will get you nowhere! For those who don’t know Dhan, he’s the five-time UK Latte Art champion and now head barista of his own coffee shop mini-chain, Coffee Lab. This started in Winchester, but now has branches in places such as Chichester, Portsmouth, Southampton and Salisbury. If you missed Dhan at the festival, you can always catch him at the Coffee Lab for an impromptu lesson. Alternatively, he’s got a book, Coffee Art, coming out in October.

Another practical session came on my first morning when my KeepCup and I popped by see my friends at Allpress, who, disappointingly, hadn’t brought Florence the Coffee Caravan (some weak excuse about needing a crane and knocking a hole in the wall in order to get her onto the top floor). However, rather than make me my first coffee of the festival, it was suggested that I might like to make it myself. So, I did, with a little help from Elice, a lady who works in accounts (when I visited Allpress at the start of the year, I’d been told that everyone who worked there could do everyone else’s job and here was living proof; the accounts team making coffee with the best of them). The resulting coffee was pretty good, even if I say so myself, while the latte art was all my own work! Dhan would have been proud of me.

To round off this little round-up, my new SoL Cup and I called in to see UCC, which was running 10-minute home barista sessions. You choose the topic and you get 10 minutes of one-to-one tuition. So, my first dilemma: what topic? Since I got my Sage Barista Express, my espresso extraction’s been pretty on-point, so I decided to build on Dhan’s advice and get some more help with my latte art. However, rather than focusing on the art itself, I went back to basics with a 10-minute refresher on milk steaming. After all, if you don’t have well-steamed milk, you can’t do decent latte art.

I learnt that the key to good milk is to put the tip of the steam wand just below the surface. You also need it slightly off centre, which makes the milk swirl in the jug, helping to incorporate the air into the milk. If you’ve got it right, the milk should chirp rather than scream (if you don’t know what I mean, go to a bad coffee shop and listen to the noise the steam wand makes). You also don’t want to get too much air into the foam: it should be dense rather than frothy.

Once you’ve added enough air, you can drop the wand further below the surface (in reality, since the wand is fixed, you raise the jug). This heats the milk without incorporating more air. When you’re done, leave the jug to stand for five seconds, then give it a good hard knock on the work surface. This knocks out any large bubbles. Finally, give the jug a good swirl.

After all that, I had just enough time left to practice some actual pouring. I was told to pour quickly and with purpose (reinforcing what Dhan said) into the centre of the cup. When it’s ¾ full, lower the jug, kiss the edge of the cup and then flick at the last second to create a heart. It’s as simple as that. Now I just need to practice!

After the gallery you can see what I got up to when I visited the Union stand to try the coffee flavour challenge.

As I mentioned in the introduction, Union had its roasting demonstrations going on throughout the festival. I went to one back in 2015 and if you’ve never seen a roaster in action, I’d urge you to go. It’s fascinating and you’ll learn a lot about coffee in the process. However, the main draw for me was the taste challenge. Every year Union runs one of these and I invariably do very badly in them.

In 2015, Union had a variation on the Cup Tasters competition, while last year it ran a coffee flavour challenge. This year, the flavour challenge was back, and while the principle were the same, it was simplified from last year. As before, we were given four coffees, helpfully labelled A, B, C and D and asked to assess their aromas and taste before matching each coffee to one of four flavour groups:

To make things simpler for us, we were given a tray with four placeholders, each labelled with one of the four flavour groups. All we had to do was put the cups in the correct placeholders which matched the flavour of the coffee.

In last year’s more complicated flavour challenge I managed get two out of four correct, while in this year’s simplified version, I managed to score… two out of four. Again. One year, I swear, I’ll get all four right!

I’ll leave you with La Cimbali’s coffee & whisky pairing which you can read about after the gallery.

Just like Union, La Cimbali, in the shape of Rob Ward, always runs a fascinating coffee experience at the festival. The La Cimbali Sensory Sessions in 2015 were the undoubted highlight of that year’s festival. This year Rob was back with a coffee and whisky pairing and while this was a (sold out) ticketed event, Rob very kindly gave me a personal run through.

The concept was to take three coffees, three whiskies and three sugar syrups, assess each independently and then decide to take one of each to make a bespoke Irish coffee. Before we started, Rob did a little experiment, design to make you think about how we taste and perceive coffee. This was something I’d done before in Rob’s sessions: first hold your nose and place a crystalline substance on your tongue, which tastes just like refined, white sugar. Then, release your nose and, suddenly you realise it’s cinnamon sugar, thus demonstration that our perception changes as soon as we can smell as well as taste.

This led Rob onto the glasses he was using to taste the whisky. He’d gone with Norlan glasses, which are a slightly different shape from the normal whisky tasting glasses because they give you less of an alcohol hit when you first smell the whisky. This means you get more of the actual taste of the whisky.

The three whiskies were all from a single distiller, Glenfiddich, chosen to reduce any variation due to the distilling process. One was aged in an old IPA barrel, one in a sherry barrel and the third was Glenfiddich’s Project XX, a blend of 20 different whiskies.

Similarly, the three coffees were from one roaster, Has Bean. Rob had chosen an Indonesian Peaberry, a Guatemalan and a Burundi. Finally, he’d come up with three sugar syrups of his own making, based on demerara, dark muscovado and molasses respectively. The idea is to assess each of the components separately, then pick one of each to make your own Irish coffee, although Rob had taken pity on us and also suggested his own pairings, which I’ll give you below.

First up was the whisky that had been aged in the sherry cask. This, Rob recommended matching with the Indonesian Peaberry, the chocolate notes in the coffee offsetting the bold, boozy notes of the whisky. For the sugar syrup, he recommended the molasses, my favourite of all three, which tasted like black treacle. This, Rob reasoned, would stand up well to the other bold flavours.

Next up was the IPA cask whisky, which Rob paired with the Guatemalan, to which he recommended adding the dark sweetness of the dark muscovado sugar syrup.

Finally, there was the Project XX. I’m no fan of whisky, but I found this by far the most interesting, a really complex flavour which gave a big hit on the first sip. In contrast, the coffee, a Burundi, was quite delicate and floral, adding to the whisky’s complexity. Last, but not least, the demerara sugar syrup, the sweetest, smoothest of the three.

I found the whole process fascinating, but when it came to it, I decided that it would be madness to go against Rob’s recommendations. So, which one? In the end, I decided on the Project XX/Burundi/demerara sugar combination which Rob made for me. One double shot of espresso diluted with 20g of water, plus 15g of whisky, a dash of syrup and all topped off with double cream, poured through a sieve so that it’s slowed down and doesn’t over mix with the coffee/whisky.

The result was quite exceptional. On the first sip, there was nothing but cream, but on the second sip, the complexity of the whisky came through, while on the third sip, I got the full, rich complexity of the whole, coupled with a delightful but not overpowering sweetness.

If this coffee and whisky pairing gets run again next year, get in there early and book yourself a ticket! And if not, book whatever Rob and La Cimbali are doing instead!

That’s all from the London Coffee Festival for now. See what I made of all the coffee I had at the festival in the last of my detailed write-ups.