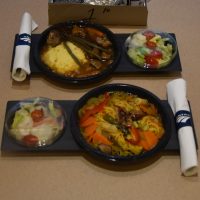 One of the great pleasures of taking Amtrak’s long-distance trains used to be the dining car, where you could enjoy three hot meals a day, cooked to order from a varied menu, along with dessert and full table service. While this is still true on services running west of the magical line from Chicago to New Orleans, since the start of October last year, Amtrak has replaced its full dining service on all other sleeper services (except the Silver Star from New York to Miami, which is due to move to the new service on 1st May this year).

Although the new service is touted as an “upgrade” by Amtrak, it’s anything but. Having experienced (and loved) the full service dining car, what’s replaced it is vastly inferior, as Amanda and I discovered when we took the train from New York to Atlanta at the start of this month. Instead of a bustling dining car, full of happy passengers, we found a near empty carriage, grumpy staff and, while the food was good, the menu was limited (particularly if you don’t eat meat). As an experience, it was an immense disappointment, fundamentally detracting from the enjoyment of our journey.

You can read more about our experiences after the gallery.

At the start of March, Amanda and I took the weekend to travel from Portland in Maine to Atlanta, a journey which included catching Amtrak’s Crescent service from New York to Atlanta, departing at 2:15 in the afternoon and arriving at 8:15 the following morning. If you’re interested, you can read all about that journey in the previous Travel Spot.

It’s a journey I’ve made once before, travelling all the way to New Orleans in 2018, back when the Crescent still had a full dining service. I’ve also gone coast-to-coast (in 2015), travelling from Portland (Maine) to Portland (Oregon), taken the Coast Starlight from Los Angeles to San Jose, followed by the California Zephyr from Emeryville all the way to Chicago. There are also a couple of other journeys that haven’t yet graced the pages of Brian’s Travel Spot. On each occasion, eating in the dining car was an integral and highly enjoyable part of the journey.

On our latest trip, we had dinner and breakfast on the train. Under the old service, you would book your slot in the dining car then make your way down to the dining car when the time came. Unless there were four of you, you’d be sat on a table with a selection of your fellow passengers, the waitstaff making up tables of four on the fly. I met some very interesting people as a result and never had a bad experience.

One of the touted benefits of the new system is its supposed flexibility, allowing you to eat in your sleeper compartment if you want (with your attendant fetching your food) and doing away with the need to reserve your dining slot. However, the reality of the new system turned out to be quite different.

Our attendant came to take our dinner orders in mid-afternoon. If there was the possibility of having our food delivered, it wasn’t mentioned. We were offered two sittings: 17:00 (before we reached Washington DC) and 18:45 (not long after we’d left). There was also a third sitting for those passengers boarding at Washington DC itself.

Whereas under the old system, we’d have chosen a slot, now we had to order as well, choosing from the new “contemporary” menu which featured just four options (five if you include the child’s meal). Of these, only one had no meat, while the seafood option was creole shrimp and andouille sausage, ruling it out for pescatarians.

This compares to the old menu, which had separate lunch and dinner menus, the lunch menu with six options, the dinner menu with eight (the new “contemporary” menu is for both lunch and dinner, further reducing choice). The last time I took the Crescent, the dinner menu offered a choice of four vegetarian dishes, plus one fish option. Dessert was also disappointing, with the choice of a chocolate brownie or a toffee crunch blondie, replacing the three or four options on the old menu.

Most disappointing of all, however, was the service. On previous trips, the dining car was a hive of activity, full of conversation and with a warm welcome from the waitstaff (on one particularly memorable journey, everyone, regardless of age or gender, was endearingly referred to as “baby doll”). This time, we arrived to find an empty dining car, bereft of any atmosphere, plus one extremely grumpy, uncommunicative member of staff.

Even though we clearly didn’t know the routine, we had to go and ask for our dinner. Amanda went up and was wordlessly handed a large white bag with sleeper car and compartment number written on it. And that was the sum total of our interaction with the staff.

The food itself was pretty good, although my vegan Asian noodle bowl (the only thing I could eat on the entire menu) was spicier than I’d have liked and resulted in my lips going numb. Amanda similarly enjoyed her red wine braised beef, although she wasn’t a fan of the polenta (which, in its defence, I quite enjoyed). The chocolate brownie (Amanda) and toffee crunch blondie (me) were also good, but a far cry from the desserts I’d enjoyed and previous trips.

Breakfast, if anything, was even more disappointing. You can see what we made of that after the gallery.

In the days of the full dining car, breakfast was probably my favourite meal, with the menu offering scrambled eggs, pancakes, omelettes and the like. The new, “contemporary” menu has replaced this with a breakfast buffet that many budget hotels would be embarrassed to serve. It’s largely help yourself, but you can ask for a breakfast sandwich (which has meat) or a yoghurt from behind the counter. In the end, I had oatmeal (ie a pot of ready-to-make oatmeal that you get at a supermarket) while Amanda had cereal, neither of us fancying the rather insipid (and small) American muffins.

The only good thing about breakfast was the coffee, but that’s only because I made it myself in my Travel Press, although even then I had to justify why I wanted some hot water from our ever-grumpy server. The only other thing that enlivened our breakfast was a rather pretty sunrise through the dining car windows.

In summary, while the food at dinner was good (on a par with an above average airline meal), the service was awful and the experience non-existent. Had I never travelled on Amtrak before, I might have thought it was acceptable, but compared to what it replaced, it’s an incredible disappointment, robbing the train of one of its major highlights. The choice is also very, very limited: if I’d have stayed on the train to New Orleans, I would have had to have the Asian noodle bowl for all three meals (dinner, plus lunch and dinner the following day) at which point I would have been heartily sick of it!

I want to say one final thing about the attitude of the staff. Normally I’d have considered the service unacceptable, but I’m aware that the staff are as fed up with the new dining arrangements as the passengers are. Previously, our server would have been part of a large team in a busy dining car. Now the role requires one person, working alone, who has the sole job of heating up meals in a microwave, packing them into a bag and handing them over. If that had happened to me, I’d be pretty grumpy too!

In closing, the new dining service is a massive downgrade from what went before and I wish Amtrak would reverse its decision. It’s a loss, by the way, not just for the sleeper car passengers: with the old full service dining car, coach passengers were also allowed to eat in the dining car if they wished, paying for their meals (something I’ve done in the past). That option has also gone with the new system. Sad times indeed.