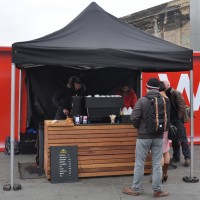 Noble Espresso has become a fixture in Battle Bridge Place outside London’s King’s Cross Station, occupying a pitch that was once graced by the likes of Weanie Beans and Bean & Gone. However, for just over a year, Noble Espresso has been in occupation, regardless of the weather, serving excellent espresso-based drinks, plus tasty pastries, to all-comers.

Even more impressive, given that the two baristas, Shaun and Jonny, operate from a simple wooden counter, with little shelter from the elements, is the dedication to quality. Noble Espresso regularly rotates the beans on offer, which can make dialling in the new beans on a cold winter’s morning a particular challenge!

As I watched Shaun and Jonny serve a steady stream of customers, my admiration grew. There were no quick extractions here, no skimping on the steaming of the milk, with each flat white, latte and cappuccino carefully crafted and exquisitely poured.

November 2016: Craft Coffee has taken over the pitch from Noble Espresso as Shaun has decided to concentrate on his milk business, Estate Dairies. I can confirm that the coffee and service are just as good though!

Noble Espresso opened its doors (if it’s possible to open one’s doors when one has no actual doors to open) at the end of 2013. Some might think Noble Espresso brave, foolhardy even, but if you’re going to start an outdoor coffee business, I guess knowing that you can survive the worst that the British weather can throw at you is a bonus. Better that than opening in the summer when the sun is (potentially) shining, only to discover that you can’t hack it when you have to set up on a dark, freezing winter’s morning. The fact that, 15 months later, Noble Espresso is still here, going strong, despite the opening of several other quality coffee options in the neighbourhood, is testament to its quality and the warmth of the welcome you receive from regular baristas, Shaun and Jonny.

If you know your way from King’s Cross to the nearby Caravan or Notes, then you’ll know where Noble Espresso is. Otherwise, if you’re new to the area or have just arrived on the East Coast Mainline, instead of heading straight out of the front of the station, turn right and follow the outside curve of the new concourse. With luck, you should find Noble Espresso directly in front of you, King’s Cross to your right and St Pancras to your left.

The set-up is fairly simple, with just a black pop-up gazebo (against an incongruous and, I think, temporary red hording) providing shelter for the small counter, a slatted, wooden affair. To the left is a small selection of cakes and pastries, where you also order. Next comes the Nuova Simonelli Mythos 1 grinder and a two-group La Marzocco Linea Classic, which sit squarely in the centre of the counter. Finally, on the right-hand end, you can collect your coffee.

I visited Noble Espresso twice, once in January and again in February, both fairly cold, grey days. For my first visit, Workshop’s Cult of Done was the bean of choice, while on my return, Shaun and Jonny were working their way through a batch of Square Mile’s Red Brick. They also spread their net (much) further afield, getting beans in from the likes of Berlin’s The Barn.

Both times I had a flat white, my typical tipple for that time of the morning; they were both excellent. I know both coffees well, so there were no surprises there, but the milk was well-steamed, the coffee perfectly extracted. Since Noble Espresso is takeaway only, everything’s served in paper cups, unless, like me, you take your own. On my first visit I also breakfasted on an excellent almond croissant.

December 2015: Noble Espresso was a runner-up for the 2015 Coffee Spot Award for Best Takeaway Coffee.