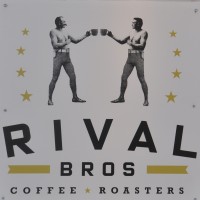 There’s not a lot to Rival Bros. Effectively it’s a long walk-through line for takeout customers with some tables for those who wish to sit in. Or, like me, sit out, since all the tables were taken. Fortunately it was a lovely, sunny day so I was quite happy to occupy one of two tables on the Lombard Street sidewalk. And not fall through the trapdoors!

Rival Bros has two doors, both on Lombard Street, one on the corner and the other at the far end. Ideally you enter by the corner door, move down the length of the store, and exit by the other door (although I saw a few people going against the flow without too much bother). There’s a little window-bar (no seats) along 24th Street, immediately to the left of the corner door. To the right, a padded bench runs the length of the Lombard Street side, with six two-person tables, each with its own chair, which provides the bulk of the seating.

On the opposite wall is a niche with a two-seat sofa and coffee table, plus two pairs of power outlets. Next are the retail shelves (coffee-making equipment and beans), then the counter, starting with cake, then till. The Chemex station follows, so you can watch your barista make your coffee if you wish. Then comes a two-group La Marzocco espresso machine and the espresso grinders. Finally, there’s a pick-up/waiting area by the second door, through which you then exit. It’s a clever, well-thought-out system that seems to work, although since I sat outside, I can’t tell you if it would be annoying to sit inside with a constant stream of people going past.

Rival Bros rotates the coffee every few months, although it’s more of a case of “all change” rather than each coffee changing out in turn, which I’m more used to. After a long discussion with my barista, who was happy to talk through the options and make recommendations, I had the Sumatran through the Chemex. We chatted while she prepared my coffee and, having discovered that I was leaving for Washington DC that afternoon, she give me some DC recommendations.

The coffee itself was pretty bold for a pour-over, especially through the Chemex, which I find usually highlights more delicate coffees. It had a lot of body and held its own as it cooled, when further flavours came through. When cold (since I sat outside, it cooled quickly) it had a cold-brew like quality, but without the extreme kick I normally associate with cold-brew.

Although sunny, it wasn’t that warm, so after 30 minutes, I retired inside to defrost, whereupon a spot opened up on the sofa, which I grabbed without further ado. To accelerate the process I ordered a decaf derringer (a cortado to you and me). This came in a tall glass and was lovely and sweet, the coffee going very well with the milk, but at the same time, the flavour flooded through, giving hints of honey and nuts. It was probably the best espresso with milk I had in Philadelphia.

I rounded things off with an excellent slice of thick, crunchy toast with strawberry fig jam. Sadly I then had to leave for the station, but it was the perfect end to my stay in Philadelphia.

December 2015: Rival Bros was a runner-up for the 2015 Best Overseas Coffee Spot Award.

February 2018: you can see what I made of the third Rival Bros location on Tasker Street in south Philadelphia.