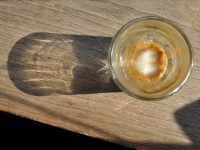 In true Coffee Spot fashion, I do most things backwards. So, naturally, my first experience of Sweetleaf was the wonderful Williamsburg branch which I visited this time last year. On my return to New York, I was determined to rectify this with a visit to the original over in Queens. So, hot off the bus from Wayne, New Jersey, I jumped on the metro, crossing under the East River to emerge, in sparkling sunshine, just a few blocks from my destination

The Williamsburg branch is a lovely spot, with an amazing interior. However, the original, housed in a 19th century building and furnished with antiques imported from Paris, goes one (or perhaps two) better. I particularly liked the tin ceiling, which dates from the 1800s. There are plenty of seating options, including a laptop room to the right, comfy chairs to the left, bar-stools at the counter and the Record Room right at back, past the counter.

The coffee’s just as good as the interior, Sweetleaf roasting everything in-house and offering the Slap Shot blend (50% Peru, 50% Colombian micro lots) and decaf on espresso, plus the obligatory bulk-brew (no individual hand-pour at the moment). There’s also cake, baked on site.

Sweetleaf, which opened in 2008 (and tripled its size in 2010 when it expanded into its current space), is on the corner of a major intersection, where 11th Street meets Jackson Avenue at the northern end of the Pulaski Bridge. The entrance is on Jackson Avenue, one small window overlooking 11th Street. There are some nice chairs (11th Street) and a bench (Jackson Avenue) outside, but it’s very noisy and busy.

Sweetleaf’s layout is strange. As you enter, to your left there’s a lovely seating area (three comfy armchairs and a two-seater sofa arranged in an n-shape in the Jackson Avenue window). Meanwhile, the counter’s ahead of you and, to your right, at a slight angle, is the laptop room with its eight-seater communal table and two-person window-bar overlooking 11th Street, which really catches the sun.

The counter runs away down the length of the room, housing espresso machine and grinders. A small ordering-point faces the door next to the cakes, which are cunningly kept in a lovely, old wood-and-glass display case. They are, in fact, the first thing you see on entering. The counter effectively forms a corridor to the back, where you collect your coffee, keeping people away from the seats at the front, but it’s a bottle-neck when busy.

There are two more seating options back here. Beyond the pickup point are three bar-stools at the counter, while, right at the back, there’s the Record Room, a tiny, triangular space with three small, round tables. Two are along a bench against the left-hand wall, one immediately to your left, the other at the triangle’s apex. The other table’s hidden in a sharp corner on the right. It’s all very cosy.

I tried the Slap Shot as a split shot: single espresso, plus a cortado, served, naturally enough, with a glass of sparkling water. Sometimes milk changes a coffee completely, or, if there’s too much milk, the coffee’s entirely lost. A cortado’s therefore a good choice (recommended by my barista) since it really lets you taste the coffee.

As an espresso, the Slap Shot was quite sharp and slightly sour. Not unpleasant, but not quite to my taste. In milk, it really retained its character, although the milk’s sweetness helped offset its sharpness. Very well made, the milk held its pattern to the bottom of the glass.

I paired this with perhaps the best thing I had when I was at Sweetleaf in Williamsburg: a cinnamon doughnut hole, which was as awesomely awesome as I remembered it!

I followed this up with a slice of the carrot cake (although a mountain might be a more accurate description of the portion size) at the behest of Sweetleaf’s owner, Rich, who popped in while I was there. I had to have something to wash it down, so went for a decaf cappuccino, partly to get one of the awesome tulip cups and partly so the barista could showcase her latte art skills (she wasn’t happy with the one she did in my cortado).

The carrot cake was an excellent recommendation; full of chewy sultanas, although it was very sweet, particularly the butter cream icing. The cappuccino didn’t have quite the same punch as the Slap Shot, but it more than held its own, the flavour coming clearly through the milk.

December 2016: Sweetleaf, Jackson Avenue was a runner-up for the 2016 Best Physical Space Award.

Liked this? Then don’t forget to check out the rest of New York City’s speciality coffee scene with the Coffee Spot Guide to New York City.