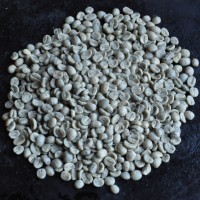 Back in November, I visited the delightful Finca in Dorchester. As well as being a lovely café, Finca also roasts all its own coffee using a bright-red, 1kg Genesis CBR-1200, which sits proudly on the counter. While I was there, the owner, Don, explained how he’d started roasting at home in a wok. As a parting gift, he gave me 4oz of green beans (Finca Muxbal from Mexico), plus a set of instructions for roasting them in Finca’s CBR-1200. Perhaps more relevant to me, the instructions also included a section roasting at home in a wok.

So, two weeks into January, the Coffee Spot Awards safely out of the way, I decided to give it a go. After reading and re-reading the instructions (that’s got to be a first for me), I set up the kitchen, opened all the windows and kept the door to living room (where the smoke alarm lives) firmly shut. As it turned out, there wasn’t much smoke, but it would have been enough to set the alarm off and I’m glad I ventilated the room. 30 minutes after roasting, a pleasant, slightly smoky smell still lingered in the kitchen.

If you want to know what happened, you can find out after the gallery!

Following Finca’s instructions, I heated the wok to hot but not smoking, then put the beans in, turning them all the time to stop them burning. I do wonder if I had the initial temperature too high, though. While the beans weren’t smoking, Don had told me that they should heat up relatively slowly and I could expect first crack (when the moisture in the beans starts to boil, causing them to literally crack) after about 10 minutes.

I hit first crack at around five minutes, quickly turning the gas down a notch. I never really hit the “rolling crack” phase described in the instructions (where all the beans crack at once), but after getting the odd pop or two all the way from five to 10 minutes, I started getting more cracks after 10 minutes and, at the 12-minute mark, I turned the heat down a smidge.

I took the wok off the heat after 13½ minutes and, as per instructions, immediately spread the beans on a tray before putting it outside to cool. Being January, it was just above freezing, which worked really well!

Be aware that this technique produces a lot of chaff (outer casing of the bean). However, following Don’s advice, I simply blew on the tray which removed the majority of the chaff. I got rid of the rest by tossing the beans around in a colander.

I’d been warned that roasting would be uneven, but I’d thought this would mean some beans would be lightly roasted, while others would have a darker hue. After a misguided attempt to separate the light beans from the dark (to see if that impacted the taste), I discovered (by turning the little buggers over), that the light ones were dark on the other side… A truly uneven roasting process!

Pro that I am, I didn’t consider weighing the beans until after I’d finished roasting them, at which point I discovered that I’d got 111g out, so I’m guessing that I had slightly more than that to begin with (4oz is 113g).

Once the beans had cooled, I put them into re-sealable coffee bag, one of many that I had set aside for this very purpose (either that or I’m a hoarder; you decide…). Then I waited, since you should never use beans immediately after roasting.

Six days later, I got out my trusty Aeropress, ground a batch in Woody and made some coffee. The result? I was genuinely surprised at how good it was. I won’t say it hit any great heights, but it was smooth, with a slight smoky smell and taste, which I’d expected to be more dominant. Had I bought the beans, or been served the coffee, I’d have been very happy with it!

With hindsight, there’s only one significant thing I’d do differently: roast the beans in 2oz batches. Partly this is because I think it’ll suit my wok slightly better and partly because I can learn from the first batch and apply the lessons to the second. As it was, I didn’t do such a bad job first time around, but it was only after I’d tossed all the beans in the wok that I suddenly realised that if I’d burnt the lot, that would have been the end of that!

Afterword: I rather belatedly thought to try the beans through my cafetiere and discovered, to my surprise, that I preferred them that way. Compared to the Aeropress, there was more body to the cup and the smoky flavour came through a little more (in a good way). I think the cafetiere plays to the coffee’s strengths and I wish I thought to try it before!

Buoyed by this success, I ran a shot through Silvia, my espresso machine, and was even more impressed with the results. I’ll be honest, I thought it would be pretty poor, but it was excellent! It wasn’t as smoky as an espresso, but was very well balanced and extremely drinkable.

I also persuaded my friend Marc to try his hand at roasting green beans in a frying pan on his hob when I went to visit him in Chicago. Why not see how we got on?

If you want to find out exactly what I did, you can download Finca’s home-roasting instructions. With thanks to Finca for allowing me to distribute the instructions.

If this has got you interested in roasting, check out this introduction to roasting and what is actually going on from Abe and his coffee column.