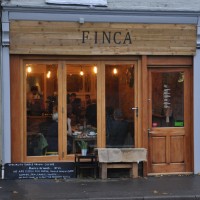 Finca is Dorchester’s second speciality coffee shop, coming after the outstanding Number 35 Coffee House & Kitchen. One might think it a little unfair that Dorchester has two such places, when many struggle to have even one, but this is how it is.

Finca opened last summer and joins the select breed of coffee-shop-cum-roaster. While the majority are quite big operations, with 10-15 kg roasters, with their own dedicated area of a large building (North Berwick’s Steampunk Coffee springs to mind), Finca has more in common with Glasgow’s Papercup Coffee Company. Both are small coffee shops which roast on-site and, while in the case of Papercup, the roasting is done at the back, at Finca, the roaster, a bright-red, 1 kg Genesis CBR-1200, sits proudly on the counter-top for all to see.

Finca has a stock of three green beans, two standard and one guest, and it roasts after hours, one or two evenings a week. Roaster aside, Finca is a friendly, neighbourhood coffee shop, although it boasts a decent food offering for such a small place, including cake, soup and toasted sandwiches, all prepared in the small kitchen at the back. It’s even got a dedicated toast menu!

Finca cuts an impressive figure on the Great Western Road, at the southern edge of Dorchester’s ancient centre. The building’s nothing special, but the shop front stands out. Constructed of wood and glass, a wooden name-panel at the top runs the full width of the store. To the right, a half-timbered door, to the left, a three-panelled, concertina window, which can be fully opened in the summer, reaches all the way to the floor.

Inside, Finca’s long and thin. When I was there, with the light fading, the multiple, bare bulbs gave the place a cosy glow. Given its narrowness, the layout is excellent. There is a small, two-person table in the window, with two similar tables on the left-hand side. On the right is a three-person bar, while the centre is occupied by a six-person communal table.

This leaves a clear path straight ahead that takes you up to the counter. This is roughly halfway down the store on the left and there’s another pair of two-person tables opposite it. Beyond the counter on the left is the kitchen, while on the right is perhaps Finca’s cosiest spot, a long, thin seating area with a padded bench on the right-hand wall facing three more tables.

The décor is just as wonderful. The wall on the right is bare brick, while the left is clad in wooden planks. Beyond this, the walls are whitewashed, as is the low ceiling, while a lovely, wooden floor runs throughout.

Finca’s not shy about its main selling point, on-site roasting. The roaster, the first Genesis CBR-1200 in the UK, sits on the counter, facing you as you come in. If you’re familiar with commercial roasters (see any of the Meet the Roaster series) then this looks nothing like one, resembling a sample roaster more than anything. However, it’s built like that for a reason: to save space. Compared even to the 3kg Toper that graces the back of Papercup, it looks tiny. The owner, Don, gave me a quick run through of its operations and I was impressed: it gives nothing away (except volume) compared to its larger brethren.

Don also explained the journey from roasting to the opening of Finca. Frustrated with the quality of supermarket beans, he started roasting at home, using a wok before graduating to a Genesis CBR-101 250g roaster. After that it was only a matter of time and, when Genesis launched its 1kg model in the UK, that was that: Finca was born.

However, the important question is, how does the coffee taste? Well, different, I would have to say. While I was there, the options were the house bean, a Brazilian Sweet Blue, or the guest, which I had, a Kenyan Kamwangi. I had an espresso, which came, beautifully presented, on its own little wooden tray/saucer. The cup was just as distinctive, white china, but with a detachable metal handle. The tasting notes said “fruity” but I didn’t really get that. Instead I’d have to say it was distinctly smoky, an earthy taste like nothing I’d had before. Or, for that matter, since.

Before I left, Don gave me 4oz of green beans to take home and roast myself. If you want to see how I got on, you can find out in the Saturday Supplement!