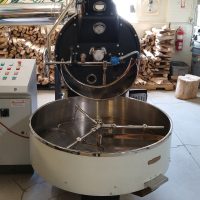 Regular readers will know that I have a soft spot for Portland’s coffee shop/roaster, Speckled Ax, which I first visited in June 2015. Back then, there was just the original coffee shop on Congress Street, with the roastery out in South Portland. However, Speckled Ax has been busy in recent years, opening its flagship Thames Street coffee shop in 2020, and then, a year later, moving the roastery to its new home on Walton Street, where it also opened a neat coffee bar.

On my return to Portland at the start of this year, I caught up with Matt, owner of Speckled Ax. I’ve already written about the coffee bar, so today’s Meet the Roaster is all about the roastery. Although an outstanding roastery in its own right, consistently turning out some excellent single-origins and blends year-on-year, Speckled Ax’s particular claim to fame is as one of a handful of wood-fired coffee roasters in the USA (reminiscent of Witney’s Ue Coffee Roasters in the UK). The magic happens in a large, industrial unit behind the coffee bar, where you’ll find the 20 kg Petroncini, a refurbished Italian roaster from the 1970s, its fire box filled with local kiln-dried wood.

Speckled Ax has been a wood-fired coffee roaster from the outset, when Matt’s Wood Roasted Organic Coffee opened in 2007 in Waterville, just over an hour’s drive north of Portland. The change of name came in 2012, when the first coffee shop opened on Congress Street in downtown Portland. That year also saw the roastery relocate to south Portland, where it remained until the move to Walton Street in 2021.

Although a wood-fired roaster, the roastery looks much like any other, save for the woodpile stacked against the wall behind the roaster. There’s the obligatory sacks of green beans, plus a mixer for post-roast blending. At first glance, the roaster looks like any other coffee roaster, the large, circular cooling pan jutting out in front of the horizontally-mounted cylinder housing the rotating drum.

However, look a little closer and you’ll see the firebox under the drum. This is subtly different from the wood-fired roasters I know from Ue Coffee Roasters. Those were converted from conventional gas-fired roasted by the addition of an external firebox. This heats the air, which is then passed through the roaster’s rotating drum. In contrast, Speckled Ax’s Petroncini is a purpose-built wood-fired roaster, the in-built firebox replacing the more traditional gas burners directly under the drum. The other addition that you don’t always see in a roastery is an electrostatic precipitator, a large piece of kit attached to the chimney, which cleans the smoke from the firebox, essential given Speckled Ax’s urban setting.

This is Speckled Ax’s second roaster and is slightly smaller than the first, although with more than enough capacity for Specked Ax’s needs. Speckled Ax uses a variety of wood grown in Maine, including red oak, maple and ash, all of which is kiln-dried before delivery. Matt’s favourite is ash, since it’s the quickest burner, but he prefers a mix of woods, since ash on its own burns so quickly the firebox needs to be continually fed. The only wood he doesn’t like is beech since it’s really hard to split.

Roasting, in its simplest form, involves applying heat to coffee beans and roasting with a wood-fired roaster is very similar to roasting with gas. The main difference is that the heat isn’t as easy to control compared to gas. In particular, it’s much harder to quickly cut the heat off, which is crucial during the critical moments between first crack (when water moisture is driven out of the beans, leading to an audible cracking sound) and the end of the roast. There’s a real risk that you’ll bake the coffee if you get it wrong.

Typically, for the same level of roast, a wood-fired roaster takes slightly longer than its gas-fired equivalent. Operating one is a much more manual process and can require a big learning curve for a new roaster, even someone who is used to roasting with gas. For example, the wood never quite burns the same way, so the temperature needs constant tracking. It’s controlled by a combination of the airflow and the amount of wood burning in the firebox. Talking of which, Matt reckons a typical day’s roasting consumes a couple of buckets of wood, so the pile that you can see in the gallery will keep Speckled Ax going for a good few months.

Despite (or perhaps because of) the extra attention required, the Petroncini is capable (in Matt and his colleagues’ skilled hands) of consistently producing some excellent coffee, as I can attest to from personal experience. I’m already looking forward to my next visit to Portland so that I can stock up!