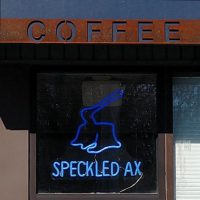 If you’ve been paying attention for the last two weeks, you’ll know that I’m back in Portland, Maine, where, weather permitting, I’m catching up with the local coffee shops. Top of my list was Speckled Ax’s new roastery/coffee bar on Walton Street, which opened last year. It’s out beyond Back Cove, north of Portland’s compact city centre, just over the train tracks from Forest Avenue, the main north/south drag.

Home to Speckled Ax’s new roastery (which has its own Meet the Roaster feature), there’s a small takeout coffee bar attached. Unlike the other Speckled Ax locations (Congress and Thames), with their multiple options on espresso and filter, here it’s just the daily batch brew or espresso, although, of course, plenty of retail bags of coffee are available to buy. There’s no seating, although when COVID-19 allows, there will be a small standing bar at the front. For now, it’s takeaway only, so don’t forget to bring your own cup.

Speckled Ax was one of three coffee shop/roasters that I visited (along with Tandem Coffee and Bard) during my first time in Portland, in June 2015. Back then, there was just the original coffee shop on Congress Street, but that was joined by the flagship Thames Street location in 2020 and then, in 2021, by the new Walton Street roastery/coffee bar.

Although a little out of town (and even then, a little off the beaten track, tucked away down Walton Street) it’s definitely worth a visit, easily reached by car, where you can park outside, or by bus (which is how I did it). From the centre, the No. 2 runs straight up Forest Avenue, conveniently stopping at the junction with Walton Street, a short walk from Speckled Ax. Alternatively, it’s a 50-minute walk from Speckled Ax in the heart of downtown (ironically just off the other end of Forest Avenue on Congress Street). You can go straight up Forest Avenue, but a nicer route is along the shore of Back Cove.

There’s not much to Speckled Ax, which is on your left, just after the train tracks (coming from Forest Avenue) or on your right, just before them (from Back Cove). Part of Walton Street Business Park, on the corner with Canco Road, there’s a small parking lot at the front, with Speckled Ax in a low, single-storey building at the back. The door, on the left, is accessible by a couple of steps or a long, shallow ramp which runs right to left along the front of the building.

Inside, Speckled Ax occupies a neat, square space, while off to the right, a doorway leads into the roastery’s packing/dispatch area. This, in turn, gives access to the roastery at the back, although both are off-limits to the general public. The layout is simple, with the counter at the back, where you order and pay. The menu is on the back wall, with the choice of coffee (fast, ie batch-brew, or espresso) on the right. There’s also a selection of tea, cookies or bagels, while to your left, retail bags of coffee line the wall. With the exception of the door, the front of Speckled Ax consists of a two-paned floor-to-ceiling, south-facing window, a narrow bar running along it.

The plan is for customers to be able to stand at the bar to drink their coffee, but for now, it’s takeaway only. I wasn’t sure what I’d be having, so had brought my Frank Green Ceramic (filter coffee), HuskeeCup (cappuccino) and Kaffeeform (espresso) cups. In the end, the La Bendición from Nicaragua, with its tasting notes of toffee, meyer lemon and chocolate, won the day, so the Kaffeeform it was.

Not that I got any of the specific notes, but it was an awesome espresso, expertly pulled by barista Tessa on the single-group Synesso espresso machine. It looked gorgeous in the cup, rich and creamy, and tasted even better, well-balanced with a complex flavour. Well worth the bus ride!