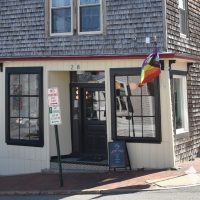 Smalls, which opened in January, is the latest addition to Portland’s small but thriving speciality coffee scene, a chance discovery which I made on Google Maps when planning a trip downtown at the end of last week. Located on Brackett Street in Portland’s West End, it’s a stone’s throw from the Casco Bay Bridge and a 15-minute walk from the Old Port and the heart of downtown.

One of the things I really admire about Portland’s speciality coffee scene is its diversity. No two places are the same (even when they’re part of the same group) and Smalls only adds to that. The front of Smalls is part coffee shop, restaurant and bar, while at the back, it’s a lovely little store, selling groceries, gifts, candles and personal care products, with an emphasis on reuse and local produce.

I can only really speak to the coffee shop part of Smalls, which serves Variety Coffee Roasters from Brooklyn in New York City. The Lucky Shot seasonal blend is on espresso, while there’s also decaf and a batch brew filter option. If you want to try more of Variety’s range, Smalls has a selection of retail boxes offering a variety of single-origins.

Smalls is on the corner of Brackett and Summer Streets, a (short) block away from the Harbor View Memorial Park. It’s a modest spot, one of three on the ground floor of a fine, old house facing onto Brackett Street, occupying the space between Summer and York Streets (I told you it was a short block). Smalls is on the right, the steeply-sloping Brackett Street running away to the left. The door is deeply recessed between two large windows and although narrow, Smalls goes a long way back inside, running all the way to the far end of the building.

Smalls is effectively split into two, the coffee shop/restaurant/bar occupying the front section, while the store is at the back, itself split across two bright, well-lit rooms. You’ll find all sorts here, from candles to face-scrubs, along with a large delicatessen/grocery section, although you’ll need to return to the till on the counter to pay for your purchases.

Talking of which, the counter, a curved affair, is off to the left as you enter, set back slightly from the door. The espresso machine is right at the front, while the concise coffee menu on the wall to the left. Next comes the till, where you order and pay, and where you’ll also find a neat stack of menus. Beyond that, the counter is effectively seating, with seven round-topped stools, hooks under the countertop and plenty of power outlets. You get a view of the bar, stocked with drinks for the various cocktails, while in the far corner is the open kitchen.

There’s more seating on the opposite side, where a bar runs the length of the wall with seven more round-topped stools, once again equipped with multiple hooks and power outlets. A mirror runs along the wall at the back of the bar (matching one set on the wall behind the counter), with shelves above, holding retail boxes of coffee, various bottles of wine and many potted plants.

The last of the seating is in the windows to either side of the recessed door, which forms two cosy bays. The one on the left, which is behind the door as it opens, tucked in between the counter and the window, is the cosier of the two, with an n-shaped padded bench running from the door to the left-hand wall. Its counterpart on the right has a round table with another padded window bench and two chairs.

Smalls is open from eight in the morning until eight in the evening, slowly changing from a coffee shop to a bar as the day goes on. The menu offers a small range of sandwiches and salads, with a variety of small plates, plus local oysters (not available at weekends). There’s also a selection of cocktails, beer and a wide range of wine if that takes your fancy.

When it comes to coffee, Smalls has a commendably concise menu and some very cute-looking cups, none of which is very big. I was tempted by a cortado, but decided to go with an espresso. Despite Variety having been around since 2008, this was the first time I’d come across the roaster, so wanted the full taste of the coffee without any milk.

My espresso arrived in a delightful cylindrical cup, the shot pulled impressively short on the blue La Marzocco Linea. The Lucky Shot blend, currently a mix of washed coffees from Ethiopia and Colombia, produced a very fine, rich, sweet espresso. I was so impressed that I bought a box of the Tupac Amaru, a washed coffee from Peru, to take home with me.