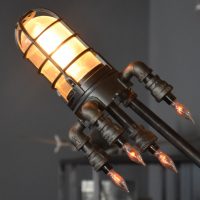 Flight Coffee of Dover (Dover, New Hampshire, that is) was recommended to me by Frontside Coffee Roasters form further upstate in North Conway. On Monday, with a free day to spare, I borrowed Amanda’s car and drove the 80 km from Portland to Dover, just over the state line in New Hampshire, to visit Flight Coffee, which is on Central Avenue, right in the heart of the old mill town.

Occupying two large, airy rooms, with plenty of seating on either side of the central, island counter, Flight Coffee has extensive breakfast and lunch offerings, with an equally impressive selection of tea (from Aera Tea Co. and Mem Tea) and coffee, the latter from Flight Coffee Co. Despite the similarity in names, the two are (these days) separate companies, with Flight Coffee Co. having its own roastery and café in Bedford, New Hampshire.

Flight Coffee on the corner of Central Avenue and Third Street, is in the heart of Dover. There’s parking throughout the area, while I managed to get a spot directly outside. Alternatively, the Amtrak Station is a few minutes’ stroll along Third Street, where the Downeaster goes either to Boston or Portland/Brunswick. I did consider taking the train to visit Flight Coffee, but its irregular schedule made a day trip a tricky option, so I drove instead.

Flight Coffee occupies two spacious, connected rooms facing east on Central Avenue. Each has its own door, but only the one on the right, which runs alongside Third Street, is in use. This is deeply recessed on the corner, leaving a raised area immediately to the left and behind you as you enter, home to a secluded two-person table. The counter, meanwhile, is ahead to your left, with more seating to your right, stretching along Third Street all the way to the back of Flight Coffee.

The right-hand wall is punctuated by three window bays, each with two tall, arched windows. The first bay has a three-person window-bar, the second a pair of two-person tables, while the third, at the back, has a two-person and four-person table. Since Third Street is at about 120° to Central Avenue, the room gets wider towards the back, leaving space for two four-person tables in a line in down middle, with a large sofa against the back wall, complete with low coffee table and two chairs.

By itself, that’s impressive enough, but to your left, a large opening in the wall, partly occupied by the counter, leads to the left-hand space. This doesn’t go as far back as the on right-hand side (leaving space for the kitchen at the back) but there’s plenty of seating, starting with a six-person communal table in the middle of the room. Another large sofa stands against the back wall, this time with a low coffee table and two armchairs, while four two-person tables run along the left-hand wall. Finally, a window-bench at the front has another three two-person tables.

The decor is fabulous, with a reproduction tin ceiling, plenty of wooden furniture and exposed wooden floorboards. You order at the counter, where you’ll find a retail section at the front, selling coffee and tea. Moving down the counter’s right-hand side, you’ll find the till, where you order and pay, with the cakes in a built-in display case and the menus hanging down from the ceiling at the back of the counter. Once you’ve paid, shuffle along to La Marzocco gb5 espresso machine to collect your drinks, beyond which the counter flairs out, housing the pour-over bar. You collect your food here, the barista or server shouting out your name in true American fashion.

I’d come for lunch, ordering the Garden Scramble (scrambled eggs, smashed avocado, feta and lots of veggies, served with either wholegrain or sourdough toast), which I paired with a cortado. Both were excellent, the scramble proving to be very tasty and filling, while the Liftoff blend came strongly through the milk to produce a rich cortado, served in a single-walled glass.

Since I had time, I also ordered a pour-over. During my visit, there were two single-origins from Flight Coffee Co. (an Ethiopian and a Tanzanian) and a Honduran single-origin from guest roaster, Brandywine Coffee Roasters in Willington, Delaware, all of which change every week or two. Preparation methods include V60, Chemex, Syphon, Cafetiere and Clever Dripper, although at the barista’s recommendation, I played it safe and had the Agaro Duromina, a washed Ethiopian heirloom, through the V60. Served in a carafe with the cup on the side, this was another lovely coffee, rich and complex, the perfect way to end my visit.

May 2022: I liked the Agaro Duromina so much that I bought a bag of it, which I gave as a gift to Meier’s – Vietnamese Specialty Coffee in Berlin when I visited the following month.

1 thought on “Flight Coffee of Dover”