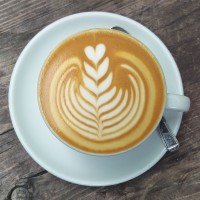 Fitzrovia’s Curators Coffee Gallery has long been a favourite of mine, a convenient stopping off point when going to the BBC Radio Theatre for recordings. However, until the start of this month, in typical Coffee Spot fashion, I’d never been to the original, the Curators Coffee Studio in the heart of the City of London. I’d been past a couple of times, but I’d always been in a hurry and, like last week’s Saturday Short, New Row Coffee, I’d always been put off by the (lack of) size. The loss has been all mine…

Curators, as the name “studio” suggests, is small, no more than a rectangle on a corner, principally catering to the office takeaway trade (it’s shut at the weekends). Despite this, if you’re staying in, the coffee is served in proper cups and there’s a neat window-bar/table, plus some handy seating outside.

The coffee is from Nude Espresso, who provide the house-blend, while there’s also a guest espresso (from Square Mile while I was there), plus decaf and bulk-brew (another Square Mile during my visit). If you’re hungry, Curators has a limited, but decent, range of cakes and sandwiches, plus, as the benches outside proudly proclaim, breakfast.

There really isn’t very much to Curators Coffee Studio. It opened in March 2012, occupying a small spot on the corner of Cullum Street. The front looks out onto the street, while the side faces a covered passage way (also part of Cullum Street) which leads to Lime Street and Leadenhall Market. There’s actually more seating outside than in, with two four-person tables on the narrow, pedestrianised street and another three tables, each with wooden benches, in the passageway. In all you could seat 14 outside.

While I was there, an early February lunchtime, there was no space inside, so I took a seat on one of the tables out front. Wrapped up warm, sitting outside was actually quite pleasant, even though it was a chilly day. However, there were lots of people passing by, so it’s not what I would call peaceful!

Inside, the layout is rectangular. The counter is at the back, there’s a window bar/table to your right, which seats four, while to your left there are a pair of stools in the corner by the door. How practical these are, I don’t know. Retail bags of coffee from various roasters hang in the window by the stools (espresso on the left, filter on the right), so I imagine sitting there is not ideal.

The door is on the left, and the counter, which takes up about half the space, is directly ahead, with the till in front of you, an eminently sensible place for it to be. Immediately to the right are the three colour-coordinated grinders, each with a little note telling you what’s on, before you get to the matching three-group La Marzocco Strada. Carry on and you come to the far end of the counter where you collect your coffee and, as if by magic, against the right-hand wall, is a little takeaway station with lids and the like. If you’re sitting in (or out) the staff will bring you your coffee. I suspect that the interior seating is deliberately limited to leave space for takeaway customers, who are the vast majority. Then again, it’s a bit of a chicken-and-egg situation, since if there’s not much seating, people won’t stay…

While I was there, both the house (from Nude Espresso) and the guest (from Square Mile) espressos were single-origins. Both of the baristas who expressed an opinion said that the house was better with milk, so I had that (a washed El Salvador) as a flat white. This was an ideal first coffee of the day, really smooth, coffee blending with the milk to create a harmonious whole. The milk was also beautifully-steamed, the lovely pattern holding almost to the bottom of the cup.