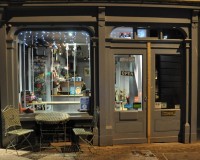 With a house espresso blend from local Roasted Rituals and  a regularly-rotating guest, Playground has the speciality side of things nailed. There’s also filter through V60, Aeropress, Chemex and Syphon, with beans from various guest roasters (the clothes line strung above the counter provides a who’s who of roasters which have graced Playground’s grinders). There’s also tea, hot chocolate and a small selection of cake.

I can’t comment on the games, save to say that there seemed to be a good selection on offer to borrow/play. Overall, Playground’s a small, cosy spot with a friendly, quirky atmosphere. This was aided by the lovely Francesca, who’d previously worked for Playground and the likes of Brighton’s Café Coho. She was minding the store for a week while the owners were on holiday in Berlin and it’s clear that they left things in good hands…

December 2016: I popped back to say hello and discovered that Playground now has a drinks licence and stays open until late each evening, serving wine, spirits and its very own coffee-infused gin! It’s also moved over to be a full multi-roaster, with two single-origins on espresso, usually chosen to offer contrasting tastes, from a rotating cast of roasters.

You can find out why I say that after the gallery.

Playground Coffee opened in 2014, but it took me until the start of 2016 to visit, although I did try, unsuccessfully, on three prior occasions (all my own fault!) to pop in for coffee. If you made it to Playground before I did, you might notice something different when you return: the upstairs, which used to be part of Playground, is no more. Accessed via a flight of stairs to the right of the door, this is now boxed off, upstairs being converted to flats. Of course, not knowing any better, I just thought Playground was a cosy, little place (which it is).

The current layout’s very much a product of the space: long and thin, with windows front and back. The door’s on the right, while in front of the large window on the left, a single table sits on the pavement of the narrow St Nicholas Street, an impressive feat in itself. Inside, the counter’s on the left, but, opposite a comfy-looking window-seat, there’s enough space to squeeze in a narrow table and a pair of swings, which act as seats.

The counter stretches ahead of you on the left-hand side, while to the right a wall hides the stairs. There’s just enough space to get to the back of Playground, where, after it widens out a smidge, you’ll find the remaining seating, focused on a long, thin table in the centre of the room. On the right, opposite the end of the counter, is a small, two-seat sofa with a coffee table. Next comes a small table, then a three-seat bar. Right at the back, flanking a small window, are a pair of swings around another small table, while on the left, a two-person bar sits over the fireplace.

I had a somewhat cake-heavy visit, starting the homemade banana bread. A dense, slab-like beast, liberally shot through with chocolate chips, it’s served cold. I know I’m not making it sound very appetising, but it was lovely and exactly what I needed.

I then moved to coffee. Having spent most of the afternoon drinking flat whites and espressos at Extract Coffee Roasters, I needed filter coffee. Unfortunately, this was not as straight-forward as it sounds…

It’s difficult enough running a coffee shop when all’s going well, but the real test is when things aren’t running so smoothly. Unfortunately for Playground, there’d been a mix up with the courier and that week’s filter coffee hadn’t arrived. What’s more, the guest filter, from Maude Coffee (which I’d have loved to have tried) had just run out.

Others may have given up at this point, steering me towards espresso, but Francesca is not the sort to be daunted by something as trivial as running out of coffee. Instead, she found me a single-origin Ethiopian from (wait for it…) Extract. Oh well, beggars can’t be choosers!

A few minutes’ later, I had a lovely, delicate, floral brew through the V60, served in a carafe, cup on the side. To make up for the confusion, a slice of millionaires’ shortbread appeared on the house. Long and thin (in contrast to the more typical squares), this was not as sweet as some, the thick, chocolate topping and rich biscuit base blending wonderfully with the caramel filling, making it the perfect accompaniment to my coffee.

December 2016: I tried Playground own coffee-infused gin, made in conjunction with the Pyschopomp micro-distillery. The gin is infused with lightly-roasted coffee beans before distilling and I tried it more in hope than expectation, not being a great fan of anything alcoholic. However, I was very pleasantly surprised, particularly enjoying it with tonic which took the edge off the gin.

Liked this? Then don’t forget to check out the Coffee Spot Guide to Bristol for more great Coffee Spots.