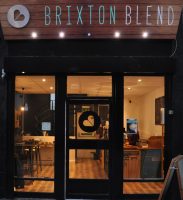 Brixton Blend is the slightly-more-minimalist younger sibling of Brockwell Blend, which opened last month just across the road from Brixton Tube Station. Occupying two floors of a narrow building directly across street from the David Bowie mural, it’s a welcome addition to the centre of Brixton, joining stalwarts Federation and Balance. When you consider that roasters Volcano Coffee Works/Assembly have also just moved in around the corner on Ferndale Road, you have the makings of a real speciality coffee hub in south London.

Brixton Blend is aiming for the takeaway market for the moment, even though it has plenty of space. This accounts for the minimalist nature of the seating (just two tables in the spacious downstairs, five upstairs) and the lack of proper cups, although there are tentative plans to give it a more permanent feel. Don’t let that put you off sitting in though, since the interior’s lovely and relaxed.

True to its name, Brixton Blend serves two espresso blends, one from the local Volcano and the other from Nude Espresso. These are joined by a decaf on the third grinder, while there’s a single-origin on bulk-brew. A small selection of excellent cakes is available for the hungry.

Brixton Blend occupies a narrow spot on the pedestrianised Tunstall Road. A few steps from the bustling Brixton Road, it’s a comparative oasis of calm. While there’s a bench outside, it doesn’t belong to the coffee shop, so you’ll have to share it with whoever comes along. Inside, Brixton Blend is deep, going back maybe three times its width, with gloriously-high ceilings, particularly downstairs. There’s also a basement, but it’s sadly off-limits, so I can’t report back on whether it would be a contender for the Coffee Spot’s Best Basement Award.

Downstairs, the counter’s on the right, set back from the window, which stretches floor-to-ceiling and almost wall-to-wall, punctured only by the single, central (glass) door. The wall space between counter and window is occupied by a set of retail shelves, stacked with bags of coffee. On the left are two well-spaced tables with bar stools, although you could easily fit three or four in. At the back, on the left-hand side, is a glorious, metal, spiral staircase which winds its way both up to the first floor seating area and down to the aforementioned, forbidden basement. A pair of small windows, high up on the back wall by the stairs, means there’s plenty of natural light.

Upstairs is smaller than downstairs, since the back’s occupied by the stairs, and, opposite them, the toilet and a small kitchen, leaving the front, with its row of three windows, free for seating. There are two-person tables to the left and right, then, in a row, three four-person tables which line a bench that runs under the windows and across the full width of Brixton Blend.

The décor’s very simple, with wooden floors and white-painted walls, giving a clean, uncluttered look. It’s worth mentioning, by the way, that was well as free Wifi, Brixton Blend has copious power outlets, making it an idea office/work space, should you be looking for somewhere to park yourself for a few hours (just don’t forget to buy lots of coffee!).

The counter’s a lovely affair, clad with various old front doors. The cake comes first, a small but tempting selection, then the till, followed by three grinders and the La Marzocco espresso machine. Slightly detached from the main counter, right at the back, is an EK-43 for grinding bulk-brew/retail bags, plus the bulk-brewer itself.

I began with a slice of the very filling pumpkin cake, which came with sweet frosting icing. I’d asked for a recommendation and while one barista had said pumpkin, the other said lemon drizzle. Both looked good, but it felt the season for pumpkin.

I followed this with an espresso. Brixton Blend has Volcano’s Mount Blend on the first grinder, with Nude’s East Blend on the second (and a Brazilian decaf from Nude on the third). If you fancy something slightly longer or are in a hurry, there’s a single-origin on bulk-brew, which, unlike the espresso, changes every week or so.

Once again I asked for a recommendation (basically, which espresso went best on its own) and this time both baristas immediately said Volcano. Given the lack of proper cups, I produced my Kaffeeform cup which goes everywhere with me these days. I was rewarded with a beautifully-pulled, well-balanced espresso with lots of body, exactly what I’ve come to expect from Volcano’s blends.

You can also see what fellow coffee bloggers, Bean There At, made of Brixton Blend.