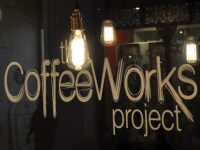 The CoffeeWorks Project is a small chain of three London coffee shops, which, since the summer of 2016, has also become a roaster as well. I first came across is towards the end of 2013 when there was just one, the original in the Angel. Despite liking it immensely, it’s taken me three years to visit its second branch in Leadenhall Market in the heart of the City.

One of the many attractions of the original is the rambling space it occupies, which includes several interconnected spaces and a gorgeous downstairs garden to the rear of the property. In contrast, I went past the Leadenhall Market branch several times, but, from the street, it never looked that appealing. Its chipboard walls and counter gave it a slightly unfinished look and it never struck me as somewhere I would enjoy sitting and having my coffee, so I passed on by.

However, fate has a way of resolving these things. Last year, I met up my friend Oksana for coffee and we went to the Leadenhall Market CoffeeWorks Project. Far from finding it unappealing, I loved it and so I returned with my Coffee Spot hat on late one afternoon in December…

September 2018: Sadly I’ve learned that the Leadenhall Market branch has closed. However, the good news is that CoffeeWorks Project is going strong and how has  five branches!

The Leadenhall Market branch of the CoffeeWorks Project is on Whittington Avenue on the market’s northern side, so it’s not part of the classic Victorian structure, with its soaring glass ceilings. Instead of ornate metal work, the CoffeeWorks Project occupies a simple, rectangular space, with a half-height window at the front, the door on the right.

The counter occupies almost the full width of the back wall, the rest of the space given over to seating. There’s a six-person window-bar running the full width of window, with a row of three two-person square tables between it and the counter.  Finally, a very comfortable sofa occupies a large niche in the left-hand wall, a couple of old crates acting as coffee tables. Although there’s a narrow bench against the right hand wall, I’m not sure how practical it is as seating.

Wood of various sorts predominates in the CoffeeWorks Project. There are some glorious wooden floorboards and all the furniture’s made of wood. The counter, meanwhile, is made of chipboard, as are the walls to the left and right. The remaining walls are painted plain white, the ceiling black. Although it doesn’t necessarily sound it, I found the interior surprisingly cosy and welcoming.

The counter has a similarly simple layout. The cakes are against the right-hand wall, dead ahead as you enter. Next comes a space where you can order (and wait for your coffee if you’re not staying), then there are twin espresso grinders, plus an EK-43 (for decaf/filter). Like the original CoffeeWorks Project, there’s a Slayer espresso machine, which takes pride of place on the counter next to the grinders. Finally, there’s a hot water dispenser (for the tea) at the far end, which is also where you collect your takeaway coffee. There’s a bulk-brewer against the right-hand wall for filter coffee and simple menus on the wall behind the counter.

There are three choices of coffee, all single-origins: a house- and guest-espresso, plus a filter on bulk-brew. During my visit these were a Costa Rican, a Sulawesi (Indonesia) and a Rwandan, while there’s also a decaf option (a Colombian). After a long discussion with the barista, I decided on the Costa Rica as a piccolo. This was a rich, complex coffee, sweet and fruity, but nicely balanced. It went well with the milk, not overpowering it in the way some fruity coffees can.

If I’m honest, it was probably a little too complex in milk for my tastes, so I thought I’d try it as an espresso, where the full complexity really shone through. The only shame is that this was the very end of the micro-lot and it ran out at Christmas. Hopefully its replacement is just as good.

I accompanied this with an individual carrot cake. Rich, moist and with creamy icing on top, it was the perfect example of its kind and brought my day to a very satisfactory end.