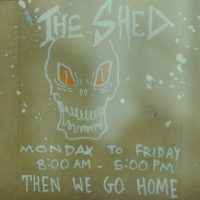 These days, I seem to visit branches of Taylor Street Baristas through the invitation of Lisa-Laura, who I ran into at last year’s London Coffee Festival. Back then she was managing Taylor Street Gallery and successfully extracted a promise from me to visit. However, when I next ran into her, I learnt that she’d moved onto The Shed, so naturally I had to pop round, calling in just before Christmas.

The Shed’s official address is Clifton Street, although that’s not particularly helpful. Rather it’s in a gated alleyway which runs behind an old warehouse (now offices) that houses the likes of Vice, linking Clifton Street (to the west) and New North Place (to the east). For those who keep up with these things, this is all just around the corner from the new Grind HQ, the roastery and headquarters of another of London’s famous mini-chains which started with Shoreditch Grind.

You can get to The Shed from either end of the alleyway, although it’s far closer to New North Place, where you’ll find a cluster of tables next to the gate, followed by the Shed itself. It has a simple construction, with a three-panelled front, windows in the two side-panels and a door in the centre. There’s also a window panel and another door in the left-hand wall. Inside, the counter is ahead of you and to the right, while there’s a two-person window-bar in the left-hand panel and another two-person bar against the left-hand wall, beyond the second door. The former is excellent for people-watching, while the latter gets you a perfect view of what’s going on behind the espresso machine. You can guess where I sat!

A bit like the original Grindsmith Pod in Manchester, The Shed might not sound too cosy or welcoming, but it actually is. It made me wonder if I shouldn’t get one for my back garden… The courtyard, by the way, makes for some excellent outside seating once the weather improves.

The Shed has a house and guest espresso, both of which change on a regular basis, usually every three to four weeks for the house and every two to three weeks for the guest. There’s also a bulk-brew single-origin which also changes every two to three weeks. This is all roasted in-house by Taylor Street Roasted, the roasting arm of Taylor Street Baristas.

During my visit, the house was the Benchmark Espresso blend, while the guest was a naturally-processed Costa Rican, which Lisa-Laura suggested I try. I was served a lovely, short, fruity shot. Not the most complex coffee I’ve had, I found it beautifully well-rounded and nicely balanced. I followed that up with a sample of the batch-brew, a washed Burundi. This too was very smooth and fruity, another example of how bulk-brew, when well done, can stand up to pour-over.

If you’re hungry, there’s a selection of cake available all day, plus, in the morning, breakfast staples such as banana bread, bircher muesli, bacon sandwiches and ham & cheese croissants.

Why don’t you check out the other branches of Taylor Street Baristas that I’ve visited: