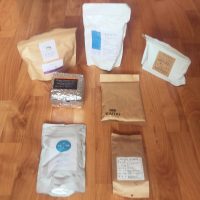 Welcome to the second of my detailed write-ups from the third Glasgow Coffee Festival, which took place earlier this month. My original intention was to split this into two parts, but events have overtaken me, so I’m going to split it into three instead, with Part III rounding-up the local coffee scene, new equipment launches & everything else.

In Part I, I looked at the venue itself, the wonderful, soaring hall that is the Briggait, before going on to look at those exhibitors who had travelled from outside of Scotland to attend. This week, I’m continuing the theme of those who had travelled a long way to get to the festival with someone who could argue that he’d come the furthest. Me.

Exactly one week before the festival, I’d been in Japan, sent on a mission by Lisa of festival organisers (I still refuse to call them curators), Dear Green Coffee. My task? To collect coffee from various Japanese roasters for a cupping at the festival. Well, there was also the small matter of a business meeting, plus a week spent travelling around Japan afterwards, which might have had something to do with my going out there. However, I prefer the first explanation…

You can see how the cupping went after the gallery.

The Glasgow Coffee Festival held a series of cuppings across the two days of the festival. I’d originally been scheduled for the final slot on Saturday, but this got moved to the final slot on Sunday instead, which was just as well since I only arrived in Glasgow at midnight on Saturday night… And, let’s face it, what better way to close out the festival than with a cupping of some Japanese coffee?

In all, I brought back seven different coffees, each from a different roaster, with a reasonable geographical spread across Japan. I wasn’t systematic about how I selected the coffee: each bag was either one I’d tried myself and liked, or was a recommendation from a coffee shop I’d visited. I also made no attempt to be balanced in the origins I picked, ending up with three Kenyans, two Ethiopians and two Costa Ricans. For a full rundown of the various coffees, please see my cupping preview.

If, at this point, you’re wondering what on earth a cupping is, let me explain. A cupping is a standard process of tasting coffee which takes out a lot of the variation introduced by differing preparation methods so that, as much as possible, you’re tasting the coffee itself and nothing else. It follows various stages, which includes assessing the aromas of the ground and brewed coffee before moving onto sampling the coffee by slurping it, making the most disgusting noises possible. For a more detailed description, try this piece I wrote about a cupping that Small Batch ran at Finisterre a couple of years ago.

So, onto the cupping. It was a fairly informal affair: no-one made any notes or attempted to score or rank the coffees, although everyone had their own favourite. I was aided in my endeavours by Ant of The Black Chapel (ie, Ant ran the cupping for me, while I chatted with everyone). Ant, by the way, had come up from London for the festival, so should be mentioned in the (long) list of those who had travelled from afar. It’s also worth mentioning that it was the first time that we’d met, despite my living around 25 miles from his coffee shop. What can I say? In many ways, Glasgow’s easier to get to than Wandsworth…

I was also grateful and flattered that several roasters turned up, including Angharad and Gareth from Carvetii and Jamie of Luckie Beans. Other notables included Paul, who used to run Razzo Coffee, and Darryl, recipient of this year’s Beyond the Bean Barista Bursary.

I’d not put much thought into how I laid the coffees out, but by happenchance, I’d pretty much sorted them in order from lightest to darkest roast. This spread was quite marked, actually, with the lightest being a Costa Rican from Sarutahiko Coffee in Tokyo and the darkest being an Ethiopian from Ogawa Coffee from Kyoto. It was this that drew the most initial comment. Even looking at the ground beans, they were clearly darker than all the rest and the aroma was similarly dark and bitter. It was the only coffee there that I was disappointed in, the taste of the roast overwhelming anything the coffee might have had to offer.

Of the remainder, there was a general consensus that two or three of the lighter roasts were slightly underdeveloped. This is what happens when you don’t roast the coffee for long enough and/or at too low a temperature and leads to more acidic coffee. However, none of them tasted horrible. At the other end of the scale, there was a general consensus that the best two coffees were the Kenyans from Weekender Coffee and Sentido (both in Kyoto). In this, I had to agree, particularly the one from Weekender Coffee which I had sneakily been drinking in the run up to the festival and which was, in my opinion, outstanding. The other one which stood out for me was the Ethiopian from Kaido Books & Coffee which I’d already had the pleasure of trying as both a pour-over and an espresso back in Tokyo.

We didn’t use that much of each bag of the coffee, so there was plenty left over. These were distributed amongst various friends, including Ant (as a thank you), fellow coffee bloggers Jamie (Bean There At) and Bex (Double Skinny Macchiato) and my local, Surrey Hills Coffee. If any of the recipients would like to chime in below in the comments section, I’d love to hear what you made of the coffee. And that goes for anyone who was at the cupping too!

I’ll close with a general exhortation, which I’ve made before, but not often enough. I should also note that I don’t take my own advice. However, if you get the chance, do attend cuppings. Coffee shops and roasters often run them, free of charge, and they are great ways of finding out more about coffee.

That’s it for now, but if you’ve liked this post, why not have a look at the third and final part of my festival write-up. You can also book your tickets for the 2018 Festival, which takes place on 19th/20th May.