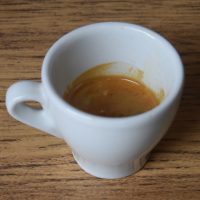 The Black Chapel occupies a unit on the west side of Chapel Yard, a sheltered, pedestrian space just off Wandsworth High Street. There are a couple of outside tables and three stools inside, but that’s about it. You really come here for the coffee, the vegan snacks/treats, and, of course, to be insulted by hang out with The Black Chapel’s legendary owner, Ant.

There’s a rotating cast of guest roasters, with a single option on espresso and another on pour-over. Ant operates an interesting system: when one coffee runs out, he grabs a bag of whatever takes his fancy from his stock cupboard and on that goes in its place… The coffee is pulled on a vintage 1964 Telechrome lever espresso machine, although while I was there, it was under repair, replaced by an even more venerable lever machine, a 1958 Faema Lambro. There’s also filter through the Clever Dripper.

When it comes to food (although not coffee, where cow’s milk is available along with non-dairy alternatives), The Black Chapel is vegan, with a small selection of sweet and savoury delights, including avocado on toast, all prepared on-site. I arrived just as the cinnamon buns came out of the oven…

November 2018: The Black Chapel is now under new ownership, having been taken over by Doctor Espresso. You can see what I made of it when I visited in July 2019.

Once upon a time, Ant ran Bambino Coffee in Crystal Palace, which I tried to visit back in 2013. Sadly, it had closed a week or two earlier, so I went to Brown & Green instead. Fast forward four years, and I finally met Ant at the Glasgow Coffee Festival, where he was running my Japanese coffee cupping. Embarrassed at having gone all the way to Glasgow to meet him when his coffee shop was only in Wandsworth, I promised faithfully that I would visit. A mere 15 months later, here I am…

The Black Chapel is in the heart of Wandsworth, just off the High Street at its junction with Buckhold Road. It’s on the ground floor of a modern block of flats (one-time abode of fellow coffee bloggers, Bean There At), facing out onto Chapel Yard, which takes its name from an old chapel (now no longer standing) which in the 16th and 17th centuries was a place of worship for non-conformists and Huguenot refugees from France and the Netherlands.

The yard is a pleasant spot, with access from both ends, although the natural entry point is straight off Buckhold Road. At the other end of the yard is the Memorial Hall, which stands on the site of the old chapel and is now home to the National Opera Studio. The Black Chapel is to the left, a long, shallow structure, its front all glass, while the bulk of the seating is a pair of four-person tables located out in the yard itself. There’s also a Tardis (aka an old police call box) against the opposite wall, which makes a nice back-drop to your coffee.

You enter in the centre, with a small, narrow seating area off to the right, three low stools clustered by a cluttered table. Indeed, cluttered is a good description of The Black Chapel, which is replete with old, and often very interesting, coffee kit. As well as the two espresso machines, there’s a Victorian syphon machine, which takes pride of place next to Ant’s winning entry for the Creators Cup.

In the centre is a shelf with retail bags of coffee and the menu, while above, two old Routemaster destination boards have the day’s coffee offerings chalked up on them. Extract’s cherished Unkle Funka had run out when I got there, replaced by a Guatemalan Finca San Antonio from Dark Arts Coffee. Darks Arts was also on the filter board, with another Finca San Antonio, this one from Costa Rica.

I started with an espresso, the Guatemalan Finca San Antonio proving to be a smooth, fruity coffee. At Ant’s instance, I followed this up with a cup of the filter coffee (Ant makes a large Clever Dripper at a time, keeping the coffee warm in a thermos), the Costa Rica San Antonio proving similarly smooth, although a little less fruity.

Chatting with Ant, I realised that I had (for once) timed my visit well. Ant has recently put The Black Chapel up for sale as a going concern, including the espresso machines, tables and other bits and pieces. So, if you ever fancied owning your own coffee shop (and no, you need not apply if you want to turn it into a mobile phone shop), please get in touch (with Ant, not me!).

For an alternative viewpoint from a couple of years ago, here’s Bean There At’s take on The Black Chapel.

6 thoughts on “The Black Chapel”