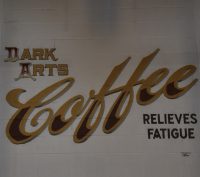 Dark Arts Coffee has been roasting since 2014 and I’ve enjoyed its coffee at various places, including The Black Chapel in London, plus in a cluster of places in the northwest, such as Manchester’s Idle Hands and Siop Shop and Chester’s Little Yellow Pig. I Will Kill Again, its interestingly-named coffee shop/roastery, has been on my radar pretty much since it opened in May 2016. My only excuse for not visiting sooner (other than to give Mike Stanbridge something to nag me about) is that Homerton, its East London home, is not somewhere I get to very frequently.

Located in a railway arch, the roaster (off to your right as you enter) is in action from Monday to Friday, while the space is open to the public as a coffee shop from Wednesday to Sunday. There’s a range of (mostly) communal seating, including several picnic-style tables outside.

Dark Arts only roasts single-origins, which it then gives some interesting names. The espresso, available as black or white (with milk) in sizes of 4, 6 and 8oz, rotates between Lost Highway and Dead Brick, while there’s a single filter option on batch brew. If you’re hungry, try the eclectic all-day brunch menu.

Dark Arts Coffee is an interesting company, founded by a group of friends who I’ve heard described as “Kiwi Death Metal Bikers”, an image that a Wifi password of “lordlucifer” does nothing to dispel! Nor, for that matter, does a name like I Will Kill Again… Although based firmly in East London, Dark Arts has, bizarrely, a Japanese offshoot, with a café/roastery in the town of Hayama.

Back in Homerton, I Will Kill Again is easily missed. Although officially on Ponsford Street, it’s actually in a row of railway arches in a dead-end lane along the north side of the tracks, just west of Homerton Station. There was no clue to its presence out on the street when I walked past one Sunday afternoon in May, although a quick glance down the lane revealed, four arches down, a set of four picnic tables with benches laid out in I Will Kill Again’s parking spot. There’s another picnic table outside to the left of the door, making five in all.

The arch is a standard affair, slightly wider than it is deep and about as tall, with whitewashed breezeblock front/back walls, the former punctured by a single, rectangular opening with a pair of glass double doors flanked and topped by narrow windows. Inside, the side walls and arched ceiling are lined with corrugated steel, so overall the décor is very white! There’s plenty of daylight from the doors/windows at the front, supplemented by three rows of three utilitarian fluorescent tubes hanging high above.

The layout has a similarly utilitarian feel, which is not meant as a criticism. Indeed, given the arch’s limited size, I was impressed that coffee shop, kitchen and roastery managed to coexist while preserving so much space for seating. The roastery is on the right-hand side, an 5kg Diedrich (pleasingly in black) tucked away just inside the door. Beyond that, in the right-hand corner, there’s a mezzanine level, staff only upstairs, while downstairs doubles as green bean storage/seating with a single, eight-person communal table.

Coffee shop and kitchen coexist in a wonderfully compact counter to the left of the door. There’s space for a two-group La Marzocco Strada espresso machine and two grinders, plus till and cakes along the front, while behind is the open kitchen which produces the eclectic all-day brunch menu which can best be described as fusion, dishes varying from classic poached eggs on toast through Kimchi fried rice to potato rosti waffles. Sadly, I was full after breakfast at Pavilion Café, otherwise I would have indulged.

The remaining space contains more seating. There’s a tall, eight-person table just to the right of the door, running parallel to the roaster, with the aforementioned table under the mezzanine beyond that. At the back is a lower, six/eight-person table with benches on either side, while on the left, beyond the counter, a pair of three-person sofas face each other across a low coffee table. Finally, right at the back, is a two-person table with the only chairs in the whole building.

Still full from breakfast, I decided to keep things simple and ordered an espresso, which was the Dead Brick, a Guatemalan single-origin (this is always the same Guatemalan, while the other espresso, Lost Highway, changes seasonally and is currently from Peru). My espresso was served in a classic, black bowl-shaped cup. Mind you, given I Will Kill Again’s reputation, I would have been disappointed had the cup been any colour other than black! The espresso itself was (fortunately) anything but dark, a lovely, well-balanced shot with a touch of acidity and very much a front-of-the-mouth taste.

December 2019: I Will Kill Again was a runner-up for the 2019 Best Roaster/Retailer Award.

October 2019: you can see what I made of Dark Arts Coffee Japan when I visited Hayama on a trip to Japan in September.

9 thoughts on “I Will Kill Again”