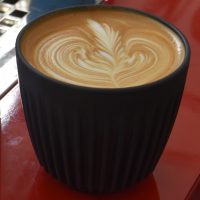 This time last week I headed off to Tonbridge, to attend La Marzocco’s Out of the Box event. I’ve been to a few of these before, but I’ve very much seen them as industry events, a party thrown by coffee people (at La Marzocco) for coffee people, the attendees being baristas, roasters, the odd coffee blogger and occasional coffee enthusiasts not in the industry. As such, it never occurred to me to write about them. Last Saturday, all that changed.

Out of the Box was held in Tonbridge Castle, a move which had plenty of us scratching our heads ahead of time (previous ones have always been indoors) and not knowing what to expect (although if I’d read the description, I might have known better!). What’s more, although not widely advertised beyond the industry, it was open to the public, so drew a very different crowd.

The result was a surprising and wonderful mini-coffee festival, including a new barista competition, Crush the Rush. Indeed, if you’ve never been to a coffee festival and were wondering what one was like, you could do worse than go to the next Out of the Box; it’s free and will give you a good feel for one. But what was it like?

Although I’ve said Out of the Box was like a coffee festival, it was also much more party-like than your average coffee festival and more family-friendly. And while I said I went not knowing what to expect, that’s largely my own fault for not reading the description on the La Marzocco website, which summed it up pretty accurately. That will teach me to pay more attention in the future!

So, what was there? Well, let’s start with the venue, Tonbridge Castle, which reached its peak in the 13th century, when it had a massive gatehouse, full curtain wall with corner towers, a moat and a stone keep on top of a large motte. These days it’s a ruin: the keep, sadly, has gone, along with much of the walls and all of the towers. However, the motte (a large, mound of earth) is still there, as is the magnificent gatehouse through which you entered, surely the best entrance to any coffee event ever!

This leads to the castle grounds, a large, oval expanse of grass inside the line of the old walls. During Out of the Box, it was was ringed on three sides by small pavilions, with a large stage on the fourth (west) side, just in front of the motte. The pavilions to the north and south were home to the Roasters Village, while the ones to the east held the food stalls, along with a beer tent, a wine tent and a distiller’s tent! I’d also like to thank BWT for supplying numerous water stations, essential on a hot, sunny day!

There was even ice cream from Out of the Box sponsors, Northiam Dairy, who supplied all the milk for the day. I first came across Northiam (and its excellent ice cream) at last year’s London Coffee Festival. Northiam supplies (and processes) milk from the dairy herd on its farm in East Sussex, along with milk from several local farms, and is one of the number of dairies providing a more direct trade model for coffee shops who care as much about their milk as their coffee.

Although the event was ticketed (you could register for free ahead of time online) people were welcome to wander in during the day and I’m sure that’s what quite a few of the attendees did, drawn by the music, which could be heard across the town. Indeed, you could have spent the whole day at Out of the Box sitting on the grass, having a picnic, playing some of the games (I saw a coconut shy and a virtual reality driving game) and watching the live bands on the stage without once having anything to do with coffee!

However, I was there for the coffee. You can see what I found after the gallery.

For me, Out of the Box was a chance to catch up with lots of roaster friends from around the country. I’ve missed the last couple of Out of the Box events, so I don’t know if the Roasters Village was a new addition for this one, but the last time I attended one, there was just a handful of roasters, so this came as a pleasant surprise.

In all, I think there were 18 roasters from all across England (and including one from Wales). There were a fair smattering from London, including Allpress, Caravan, Climpson and Sons and Dark Arts Coffee, which was to be expected. There also relatively local roasters, such as Cast Iron Roasters from Sussex and Brighton’s Small Batch, as well as Curve Coffee Roasters from Margate.

What I hadn’t expected were the number who had come from further afield. Old friends The Roasting Party were along from Winchester, while Butterworth & Son had come down from Suffolk. The Midlands, East and West, were represented by Outpost Coffee Roasters (Nottingham) and Quarter Horse Coffee Roasters (Birmingham). Extract Coffee Roasters had made the trip from Bristol, while from even further west, across the border in Wales, there was Coaltown Coffee Roasters. Almost from Wales were Shropshire’s Hundred House Coffee, while Neighbourhood Coffee (Liverpool) and Grumpy Mule (Yorkshire) were vying for furthest travelled, along with Cornwall’s Origin.

It was an impressive turnout and although I spent most of my time chatting with various roasters I knew, I still didn’t get round everybody, even less get a chance to try everyone’s coffee (in the end, I only had two, a washed Guatemalan espresso from Curve and the new blend, Elixir 22, in a flat white from The Roasting Party (although I did come away with a bag of a natural Guatemalan from Hundred House that’s been going down very well through my V60 at home).

The one consistent message that I got from everyone I talked to though was home much they all loved the new format and the opportunity it gave them to talk with members of the public outside the normal coffee obsessed who usually attend these events.

The final part of the day was the new barista competition, Crush the Rush, which La Marzocco brought over from America to debut at Out of the Box. I was so impressed by it, that I dedicated a whole post to it!

December 2019: Out of the Box, Tonbridge was a runner-up for the 2019 Best Saturday Supplement Award.

2 thoughts on “Out of the Box, Tonbridge”