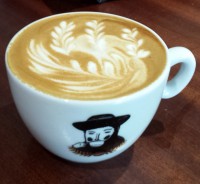 The subject of today’s Meet the Roaster is Butterworth & Son, a Suffolk roaster with a long pedigree and a name that’s as well known (locally) for its tea as for its coffee. Butterworth & Son was catapulted to fame in specialty coffee circles with the success that Howard Barwick had with its coffee in the 2012 UK Barista Championship (UKBC), another example of the beneficial impact of barista competitions on the industry.

These days, Butterworth & Son has a national (coffee) reputation, roasting up to 20 different green beans at a time on a new, 12kg Diedrich roaster. Predominantly, these go into espresso blends, but about 30% of the output is single-origin coffees, all of which is available to buy on-line.

Butterworth & Son hasn’t forgotten its roots, both in terms of product (tea still plays a major role in the company) and geography. As well as its roastery in an industrial estate in Bury St Edmunds, it has recently opened a café, Guat’s Up! (named after its bespoke espresso blend of two Guatemalan coffees) in the town and Butterworth & Son is committed to improving the quality of the local speciality coffee market.

I met up with Rob Butterworth (the son in Butterworth & Son) over the summer last year while visiting Norwich on behalf of Caffeine Magazine. I’m grateful to Alex of Strangers Coffee House, who not only acted as my guide around Norwich, but who also drove me over to Bury St Edmunds to see Butterworth & Son, thus saving me an interesting train trip. Whenever you put Alex in close proximity to an espresso machine, a grinder (or three) and a ready supply of beans, you’ll find yourself provided with a constant supply of coffee, so over a cup or two (or three), Rob told me the story of Butterworth & Son before giving me a tour of the roastery.

Rob’s father worked in Kenyan and, returning to Bury St Edmunds, started a tobacconist, quickly moving to stocking loose-leaf tea and coffee. That was over 25 years ago and these days, Rob carries on the name and tradition with Butterworth & Son. Starting out with tea, Butterworth & Son made its name with the “Bury Blend”, specifically formulated for the area’s hard water (coffee geeks are not the only ones who worry about the quality of their water!).

As business expanded, Butterworth & Son moved into coffee, Rob becoming increasingly interested in the provenance of the beans. In order to facilitate this, and in particular to improve traceability, Butterworth & Son started to roast its own beans in 2011. In 2012, Howard Barwick (now with Yorkshire power-house, Grumpy Mule), took Butterworth & Son’s Peru Tunki San Jorge coffee all the way to the UKBC finals, finishing third behind Maxwell Colonna-Dashwood (of Colonna & Small’s) and James Bailey (of Workshop Coffee). This provided a significant boost to sales, as did Butterworth & Son’s 4-Bean Espresso Blend being named the country’s top micro-roasted espresso in Issue 4 of Caffeine Magazine.

Things really took off that year and Butterworth & Son has seen steady growth since then. In January 2015, the old 5kg roaster was finally retired, replaced by a shiny 12kg Diedrich, which these days turns out around 150kg a day, five days a week. Despite this national success, Butterworth & Son is very much a local company, firmly rooted in its local community.

Although you can buy all of its coffee on-line, the majority of Butterworth & Son’s output is for the wholesale market, with 90% of this in the local Norfolk and Suffolk area. Like many independent roasters, Butterworth & Son is working hard to build the local market, selling high-quality coffee into non-speciality coffee settings such as pubs, where the focus is on good quality local food, which can then be let down by poor quality (and often non-local) coffee. Butterworth & Son is slowly changing this, with an emphasis on training and on-going support. In these endeavours, the tea side of the business (still a major component) helps immensely, giving Butterworth & Son instant name-recognition.

However, I’ll leave you with the coffee. We were drinking Guat’s Up!, a blend of two Guatemalan single-origin coffees, the result of a trip Rob took this time last year to origin in Antigua, Guatemala, part of on-going efforts to improve traceability and build relationships with producers and farmers. What’s Guat is a lovely, sweet, fruity coffee which goes particularly well in milk.