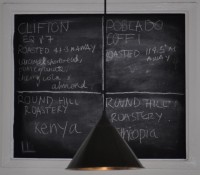 Down past Cardiff’s Catholic Cathedral, at the southern end of Charles Street, is The Little Man Coffee Company. From the name, you’d be forgiven for thinking it’s a tiny spot, but far from it. Spread over the ground floor and basement (yeah! basement!) of an old bank branch, it’s actually quite large, part of a sudden growth of Cardiff’s fledging speciality coffee scene, which, with one or two exceptions, is concentrated in the city centre. In fact, while only a five-minute walk from the likes of the venerable The Plan, Little Man Coffee represents an eastern outpost of this cluster.

Little Man Coffee joined the fray in October 2014 and from the outset had lofty ambitions, married to the sense of the achievable. A true multi-roaster from the start, Little Man usually offers two beans espresso, another two on filter, buying 10kg at a time from various roasters before then moving on. Although employing a wide variety of roasters, Little Man has a record of supporting local, Welsh roasters, such as the Welsh Coffee Company and Coaltown Coffee Roasters, as well as James Gourmet Coffee (technically in England). While I was there, both filters were from Cardiff-based roaster Lufkin Coffee.

On an unassuming corner at the junction of Bridge Street and David Street (the southern continuation of Charles Street) stands an old post office. In time, this became a bank branch before finding its true calling as The Little Man Coffee Company.

Almost square, Little Man has windows running along two sides. The door stands on the corner, at 45 degrees, doing its best not to take sides. The layout, however, shows no such neutrality, with Bridge Street forming the front of the premises. The counter is against the back wall, directly opposite the door, the seating to the left, the exception being a window-bar to the right, overlooking David Street. The layout’s very well done, leaving a clear path from door to counter, while to the right, stairs lead down behind the counter to the basement (which we’ll come back to).

The seating’s an interesting mix, a large, communal table to the left as you enter effectively delineating the seating area. There’s another bar to the left of the counter, but that only enjoys a view of the back wall. Against the left-hand wall, a row of pews has four four-person tables, leaving the remaining seating arrayed in the middle. To the door’s left, a pair of armchairs occupy a window spot, while there’s a two-person table in the window next to them. Three two-person tables occupy the middle of the room, while a pillar right in the centre hides a cosy cluster of three armchairs on one side and another two-person table on the other.

If you can’t find anywhere you like up here, try downstairs. The building’s heritage as a bank/post office is revealed at the bottom of the stairs by the massive vault door. Inside is a cosy room (don’t worry, the lock’s been taken out) which you can book for private meetings. To the right is a more open basement room with a scattering of round three- and four-person tables.

The walls are painted white, as is the ceiling, while the floors are wooden, giving both upstairs and downstairs a very clean, spacious look. The ceiling is quite low in the basement, but upstairs there are exposed beams and, coupled with the windows, it’s very bright and airy.

While I was there, Clifton Coffee Roasters’ standard espresso blend was in the first grinder, with a single-origin from Round Hill Roastery on second grinder. On filter were a pair of beans from local Cardiff roaster Lufkin Coffee, who had just started roasting. There was a choice of single-origins from Kenya and Nicaragua, but as the barista hadn’t tried the Nicaraguan, I chose that so that he could sample it. It was juicy brew, but a little thin for my tastes and could have done with more body. However, it really improved as it cooled, its fruity nature coming clearly to the fore.

As well as coffee, Little Man does a range of loose-leaf tea, a selection of cake and a small, but interesting, food menu. It’s also more than just a coffee shop, acting as a meeting place and neighbourhood hub, hosting clubs in the evenings as well as art shows and events. Little Man caters to the out-of-office market too: laptops are welcome and there’s Freelancer Monday, with free coffee from 7-11 in the basement.

Liked this? Then don’t forget to check out the Coffee Spot Guide to Cardiff for more great Coffee Spots.