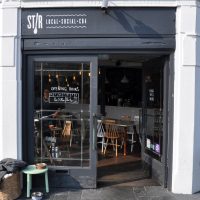 Stir is part of a slow expansion of Cambridge’s speciality coffee scene, coming along after the trend-setters of Hot Numbers and The Espresso Library. Occupying a very large spot at the far end of Chesterton Road to the northeast of the centre, it has quickly built itself a loyal local following as well as starting to attract visitors from the wider area, including cyclists and rowers. The extra space afforded by Stir’s out-of-centre location allows it greater latitude, including a function room at the back that hosts a wide variety of clubs and a massive outdoor terrace where you can catch the sun, or just enjoy some fresh air. Dogs are also welcome and, indeed, encouraged (outside).

At the heart of the operation is coffee from local(ish) roasters, Butterworth & Son, from just over the border in Suffolk. Butterworth’s award-winning four-bean seasonal espresso blend is in the main hopper, with a single-origin espresso, which changes every month, in the second hopper. This is also available as bulk-brew filter if you are in a hurry. Food is an equally important part of the Stir offering, with an extensive breakfast (until noon), brunch (until 3pm) and lunch (noon until 4pm) menus.

Stir’s about 30 minutes’ walk from central Cambridge, and it’s well worth it, particularly if you cut across Jesus Green/Midsummer Common or include a stroll along the Cam as part of your route. Once you get there, you can hardly miss it, occupying a prominent position on the corner of Hawthorn Way and Chesterton Road. South and west facing, the seating on the large outside terraces catch the sun for most of the day, while generous windows along both sides ensure the interior is just as bright.

Although Chesterton Road can be quite busy, Sitr’s set back from the road and large planters separate the seating from the pavement, making it an ideal outdoor spot. The entrance is on the corner, cut-off at 45⁰ and occupied by a pair of double doors (push the one on the right). Inside, the layout’s simple: Stir is orientated with its front facing the long side running along Hawthorn Way. The large counter’s at the back, the bulk of the seating between it and windows. There are two rows of two- and four-person tables, which occupy about two-thirds of the length of Stir. To the right, a window-bar, which runs the length of the shorter side, overlooks Chesterton Road.

Beyond the end of the counter, there’s a lounge area at the front, a group of comfy sofas and armchairs, ideal for chilling in larger groups. Just beyond the counter itself is a short row of tables against the back wall and then, beyond that, at the back, there’s a function room. This holds three large communal tables and can also be used as overspill seating.

Stir was opened in September 2015, the result of over a year’s hard work and planning by the owner, Judith, who wanted to create a community hub for the local area, catering the wide range of communities, including students, families and retired folks (plus dog-walkers). Judith confesses that she wasn’t really aware of speciality coffee before she started Stir (a bit like me before I started the Coffee Spot!) but knew that she wanted to do great coffee. That led her to her roasters, Butterworth & Son, and from there it was down the slippery slope to speciality coffee she went.

These days Judith describes her functional role in the café as “chief dishwasher” leaving the business of making the coffee to her talented staff such as Camille, the barista who served me. I already knew Butterworth’s four-bean seasonal blend quite well, so asked Camille about the guest single-origin, an Ecuadorian bean. Camille said that the guest espresso is normally quite lightly roasted, but that this one was slightly darker, so recommended it in milk. The result was a lovely, sweet flat white.

However, the highlight was the CB4 tonic, Stir’s signature drink from the London Coffee Festival. This was the Mk2, with the original being made with a single-origin Guatemalan, while Mk2 used the current Ecuadorian (I believe there’s a new version for each new guest espresso). Each one is made fresh, using a double shot of espresso, cascara, tonic, guava nectar and lots of ice. This is all shaken up and served in a bottle, making a very refreshing summer drink which wasn’t too sweet. If all cold coffee-based drinks were like this, I could be converted!

December 2017: Stir was a runner-up for the 2017 Best Neighbourhood Coffee Spot Award.

You can see what fellow coffee-blogger and one-time Cambridge resident, Bex of Double Skinny Macchiato, made of Stir.