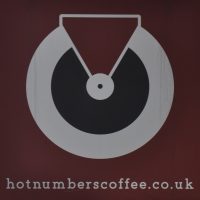 I first visited Hot Numbers on Gwydir Street in the summer of 2014, when it was the one place that pretty much everyone recommended to me in Cambridge. These days, there’s much more competition, with the second Hot Numbers (the cafe/roastery on Trumpington Street), plus the likes of The Espresso Library, Urban Larder and Novi, but the original Hot Numbers still has plenty to offer.

Spread over two large rooms on the ground floor of the old Dake’s brewery, Hot Numbers is a café, single-origin roaster and music venue. The coffee is the main draw, Hot Numbers only serving single-origins, all roasted in-house at Trumpington Street. There’s a choice of two espresso beans (with milk and without), plus decaf and another single-origin on offer through Aeropress, Clever Dripper or Syphon. There’s also a decent range of loose-leaf tea.

If you’re not that obsessive about your coffee, it’s still a great place. To start with, the atmosphere is lovely and you can sit in either of the two rooms, which offer a variety of seating. The cakes, with offerings from local bakers such as Afternoon Tease and Fitzbillies, are amazing, and there are decent breakfast and lunch menus too.

Hot Numbers occupies two units in the old Dale’s Brewery, although when it opened in 2011, it was initially just in the right-hand of these two units. In 2015, it took over the adjacent unit (an art gallery), having previously used it for over-flow seating. These days, each space has its own front door on Gwydir Street, the two connected by an archway midway along the party wall. There are two further arches, but you can only look through these.

The counter and kitchen are in the left-hand of the two units and while there’s some seating here, the bulk is next door. Entering on the left-hand side, there’s a pair of sofas in the window to the door’s left, facing each other across a coffee table, while on the right, there’s a table with a pair of comfy chairs. Next comes the counter on the left, a long, spacious affair, with cakes to the fore, followed by till, filter station and espresso machine, which is flanked by its three grinders (there’s also an EK-43 for the filter). Beyond this is the open kitchen at the back, while on the right, there’s more seating, including a large table with benches just before the connecting archway and another large, square, communal table, which is by the rear-most of the three arches.

Stepping through the archway into the right-hand room, you’ll find the bulk of the seating. There’s a piano against the back wall on the right, with multiple, small three- and four-person round tables scattered about at the back. There are also a few tables with pairs of comfy chairs up against the walls. Coming in from the street, you enter in the far right-hand corner, where you’ll find a large, four-person table with benches against the wall/window to your left, with another against the party wall by the front-most of the three arches. You can also perch on one of several bar stools at a short bar along the window at the front.

Hot Numbers has various works of art adorning the walls, all of which are for sale. Large and spacious, it’s a very welcoming space, the sort of place you could sit all day. With this in mind, Hot Numbers has a very sensible Wifi policy. You get your first hour free, but thereafter, if you buy something, you’ll receive a code, allowing you another hour on the Wifi, which stops people nursing a pot of tea and surfing all afternoon.

For me, the coffee is the main draw. Hot Numbers only serves single-origins, each carefully matched to how it’s served. For example, there are two single-origins for espresso, one to have with milk (piccolo, flat white, etc) and one without (espresso, Americano, etc), plus a decaf option. That said, Hot Numbers has long been a pioneer of dispensing with names, not actually serving “Americanos” or “flat whites”. Instead, you order by volume: 3oz, 6oz, 9oz or 12oz with either steamed milk or hot water. If you prefer filter coffee, there’s another single-origin which can be had through the Aeropress, Clever Dripper or Syphon. The choice of beans on offer is the same as at Trumpington Street.

On my most recent visit, I had a sublime espresso, a Guatemalan. This started off quite bright, but then calmed down after the second mouthful. By the third, it was a fruity, rounded espresso which coated the inside of my mouth in a particularly delightful way. On my previous visit in 2014, I’d tried the espresso (a Brazilian) and the decaf (6oz with milk), both of which were excellent.

December 2016: this is an updated version of the original post I made in September 2014. You can see what has changed in my Coffee Spot Update.