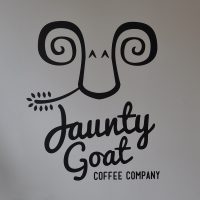 Jaunty Goat is one of Chester’s speciality coffee stalwarts, having relocated from a few doors along Bridge Street to its current location in 2015. I first visited in 2016, when it could be fairly described as a coffee shop doing good food, all in a lovely, basement-like interior that extends a long way back under the Rows above. There are even the remnants of a stone staircase in the wall at the back that might date back to the middle-ages.

Jaunty Goat was set up by twins, Patrick and Ed, with Ed leaving in 2018 to establish the nearby Chalk Coffee. Since then, Jaunty Goat has reinvented itself, considerably upping its food game to match the likes of The Flower Cup and Panna, serving a brunch menu until 4 o’clock. It’s also revamped and extended the interior, adding more table seating.

At the start of 2019, it opened a second, plant-based, location on Northgate Street, then, after reopening following the easing of the COVID-19 restrictions, Jaunty Goat itself has gone vegetarian. Finally, over the summer, it started roasting its own coffee in a dedicated, off-site roastery, with seasonal single-origin offerings on espresso (house, guest and decaf), plus another on pour-over (AeroPress/V60/Chemex).

From the street, not much has changed. Located underneath the Rows towards the bottom of Bridge Street, Jaunty Goat still has benches outside of each window at the front, with the deeply-recessed door in the centre. Stepping inside, the two-person window-bars are still there, either side of the shallow ramp which leads down to the floor, maybe half a metre below street level. The counter, meanwhile, is still on the left, set well back from the window, with seating opposite.

The two, tall bar chairs which sat with their backs to the window at the short end of the counter have gone, but the seating opposite the counter remains the same, a row of four two-person tables along a bench against the right-hand wall, followed by a round, four-person table. However, things begin to change as you move beyond the counter, the original pews and copper-topped, eight-person communal tables having been replaced by more restaurant-style seating.

Following the counter on the left, two tall, two-person tables stand against the wall (where you’ll find the stone staircase), with another two, similarly-styled four-person tables in the middle. Finally, against the right-hand wall, are three sets of conventional height picnic-style tables, each seating four. These are slightly closer together, so have been separated by chest-high partitions.

This is where the original Jaunty Goat ended, with doors in the back wall to the toilet (left)and the kitchen (right). However, while the toilet remains on the left, the seating area has been extended on the right, the kitchen having been pushed back even further. In the space this has created, Jaunty Goat has two additional four-person tables against a bench along the toilet wall and, on the right, by the door to the kitchen, a splendidly-isolated tall, two-person table.

There have also been some COVID-19 changes. You’re greeted by a QR Code where you can check-in with your NHS COVID-19 App, while each table has a QR Code which takes you to the on-line menu (and also acts as a backup contact tracer where you can enter your details). Finally, there is a disposable paper menu with space at the bottom for your name and contact details.

I visited twice, once in September and again at the start of October. The house espresso was from Costa Rica, but I was drawn to the guest, a Guatemala Huehuetenango, which I had as a very fine, chocolatey double shot. On my return, I tried the filter option, from the Democratic Republic of Congo. Available as an AeroPress, V60 or Chemex (for two), I took my barista’s recommendation of the V60. My coffee, served in carafe with a cup on the side, was excellent, a rich, fruity brew which improved as it cooled, proving to be gorgeous when cold.

On both occasions, I was there for lunch. On my first visit I had Eggs Benedict with vegan bacon, plus a side order of granary toast, the toast in particular proving excellent, thick and crunchy on the outside, soft on the inside. My only minor quibble is that the Eggs Benedict consisted of a single egg on a single muffin, whereas I’m used to my plate being piled high with extras. That said, this often means you end up with far more food than you need, whereas at the Jaunty Goat, you can eat light if you want to.

On my return, I ordered poached eggs on toast and, knowing that I would get just that and nothing else, I ordered sides of mushrooms, smashed avocado and (you guessed it) extra toast. I was rewarded with three beautifully-poached eggs with rich, runny yolks, so runny, in fact, that I really needed two lots of extra toast! Regardless, it was an excellent lunch and evidence, if needed, that Jaunty Goat really is back!

There’s a full write-up of Jaunty Goat, including a complete gallery, in its main entry. You can also see what I made of it in my original write-up, from May 2016.

December 2020: Jaunty Goat was a runner-up for the 2020 Best Filter Coffee Award.

Liked this Coffee Spot? Then check out the rest of Chester’s speciality coffee scene with the Coffee Spot Guide to Chester.