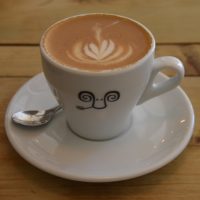 After two weeks of Iceland this, Iceland that, the Coffee Spot is back in the UK with Jaunty Goat’s second coffee shop on Chester’s Northgate Street. Chester’s speciality coffee scene has changed out of all recognition since I first visited Jaunty Goat on Bridge Street in 2016. The original Jaunty Goat has moved from its initial concept of a coffee shop with great food to being more of a restaurant with great coffee, all of which is now roasted in-house. Along the way, Jaunty Goat opened a second location on Northgate Street in January 2019.

In many ways, the second Jaunty Goat is more like the original used to be, that is, a coffee shop. However, in a bold move, the new Jaunty Goat is completely vegan, right down to there being no dairy option for the milk-based coffees. Talking of which, the coffee’s all roasted in-house, with a standard espresso-based menu, shots pulled on a Victoria Arduino Eagle One, with its three Mythos One grinders (house espresso, guest espresso and decaf). There are also filter options: AeroPress, V60 or Chemex (for two), plus loose-leaf teas. If you’re hungry, the all-day brunch menu’s available until four o’clock, backed up with sandwiches and cake.

In many ways, the new Jaunty Goat is very different from the original on Bridge Street, even though it takes under 10 minutes to stroll between the two. Located on the eastern side of Northgate Street, Jaunty Goat is just inside the city walls, although the eponymous Northgate, which once stood a stone’s throw away, was replaced 200 years ago by the arch which you see today.

Much smaller than the original and with a comparatively narrow shop front, the new Jaunty Goat looks very different. With a very white colour scheme and clean, uncluttered lines, it feels much more like a typical speciality coffee shop. The door is on the right, with four tall, thin windows on left, occupied by a six-person window-bar, seating provided by low stools. This is matched outside by a pair of low benches, each with a central table-like structure.

Inside, the layout is simple, with the counter on the right-hand side, set back from door. You order here, all the time being stared at by the cake on display to your left. The counter runs almost the full length of Jaunty Goat, with the toilet tucked in behind against back wall. The majority of the seating is on the left, but there are six tall stools down the side of the counter, tall, Perspex screens separating you from the staff.

A long, wooden bench-seat runs along the left-hand wall, pretty much mirroring the counter. This has five two-person tables, although I suspect that in pre-COVID times there would have been more. Finally, a four-person round table occupies the back left-hand corner.

There are some neat touches in Jaunty Goat. With the all-white colour scheme (even the espresso machine and its grinders are white), it could feel quite austere and unwelcoming, but this is more than offset by numerous plants, starting with three shrubs in pots outside. There are also numerous hooks under the counter, window-bar and tables, which is something I wish more coffee shops would do. This is particularly welcome in Jaunty Goat, where all the seating is provided by stools, so there is nowhere else to hang coats, etc.

I would have loved to try Jaunty Goat’s brunch menu, with classics such as avocado on toast, a (vegan) Full English and more exotic options like the Korean Buddha bowl and orecchiette pasta. However, I arrived after the kitchen had closed, so went for a not-chicken, not-bacon (plus lettuce and tomato) sandwich instead. Having been a non-meat eater for over 30 years, I can’t tell you if it tasted like either chicken or bacon, but it was really good!

Slightly over-caffeinated from a long day spent visiting coffee shops, I had a decaf flat white, with the choice of oat, almond, coconut and soy milks. I find that oat milk, with its distinctive taste, is very much to my liking, having enjoyed the oat milk drinks I’ve had in the past. However, this was the first time that I’d had Oato, which comes in glass bottles and is manufactured nearby in Carnforth, Lancashire. It’s the least oat-tasting oat milk I’ve had and, honestly, had I not known, you could have convinced me it was dairy! The result, by the way, was a really rich, smooth flat white, the perfect end to my day.

Liked this? Then don’t forget to check out the Coffee Spot Guide to Chester for more great Coffee Spots.