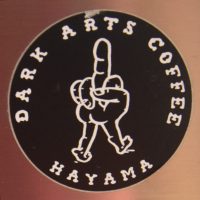 I first discovered Dark Arts as a roaster, enjoying its coffee at various places, including London’s The Black Chapel, Chester’s Little Yellow Pig and Manchester’s Idle Hands and Siop Shop. This summer, after much patient encouragement on twitter from Mike Stanbridge, I finally visited I Will Kill Again, Dark Arts’ coffee shop/roastery in Homerton in East London. That safely out of the way, I thought I’d collect the full set, using trip to Japan in August/September this year to visit Dark Arts’ Japanese outpost in Hayama, a small town in the Kanagawa prefecture, southwest of Tokyo.

Like I Will Kill Again, this is a coffee shop/roastery which opened in July 2018, although the Probat roaster was only installed in April this year. Prior to that, the coffee was imported from the UK roastery. The offering will be very familiar to anyone used to Dark Arts Coffee, with the likes of Lost Highway on espresso. This, like its UK counterpart, is a single-origin Nicaraguan, and while it has a similar taste profile, it’s a different bean. The coffee menu, meanwhile, is more typically Japanese, with plenty of iced options and various coffee cocktails. There’s also an all-day, western brunch menu, complete with specials.

Dark Arts is in the small town of Hayama, 55 km southwest of Tokyo. It’s fairly easy to get to, being 10 minutes from Zushi station by bus, while the station is on a direct line from Tokyo via Yokahama. There are two trains an hour from Shinjunku/Shibuya and more from Tokyo/Shinagawa, the journey taking just under an hour.

You can’t really miss Dark Arts, which is on the left-hand side of the road, just after a crossroads. It occupies the ground floor of a large, cube-shaped three-storey building. If you’re coming by car, there’s limited parking on-site. Dark Arts faces the road, with three large windows, each separated by a narrow pillar. There’s a solitary bench with a coffee table at either end outside the left-hand window, while the middle window contains the sliding glass door. Finally, the right-hand window looks into the roastery, which is behind the counter.

Inside, while Dark Arts occupies the whole of the ground floor, it’s only the front half that’s accessible to the public, the coffee shop occupying a rectangular space, with the open kitchen tucked away at the back on the right, behind/beyond the counter, which runs down the right-hand side. The counter, roastery and kitchen occupy the right-hand third of the space, with the seating on the left taking up the remainder, although there are two stools at the counter itself.

The bulk of the seating is provided by a pair of six-person communal tables running left-to-right in the middle of Dark Arts. Beyond them, on the left, are a further two tables, one three-person square table against the back wall and a second three-person table (this time with all three seats in a row) against the window at the front. Finally, there’s merchandising against the left-hand wall, flanked on either side by racks of vintage clothes.

All-in-all it’s a lovely space, with some gorgeous wooden floorboards, and, on the day that I was there, was looking particularly beautiful, flooded with afternoon sunlight.

Dark Arts Japan was set up in 2018 by Jacopo, who built the counter and made all the furniture in I Will Kill Again in London. His wife, however, is from Hayama and when they returned to her hometown, he decided to open a Japanese offshoot of Dark Arts, recruiting Aki (who I also met) as the head of coffee. Aki works closely with, Jamie, his counterpart in the UK, to ensure that the coffee has similar taste profiles to its UK namesakes.

As well as roasting all its own coffee, Dark Arts Japan also bakes everything on-site, including sourdough, making it one of the few sourdough bakeries in the area. There’s a small but interesting western brunch menu, with several vegetarian and vegan options, plus the usual espresso-based and filter options, although, in an unusual twist, everything, espresso and filter alike, is ground using the Mahlkönig EK43.

I started with a shot of the Lost Highways single-origin Nicaraguan espresso. On the first sip, this was really sweet, with a little more acidity coming through on the second sip, while the third (and final) sip settled somewhere between the two. Top notch.

Even though it was three o’clock in the afternoon, brunch was being served and I was drawn to the English Brunch Muffin. This had bacon on the menu, but Jacopo was happy to substitute this for a green bell pepper and also let me switch the filter coffee for the aforementioned espresso. My brunch was served with a large, tasty salad, with a vinaigrette dressing and lots of crunchy vegetables while the brunch itself was awesome.