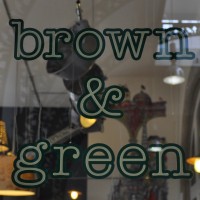 Despite the explosion of great places around the country, good Coffee Spots at railway stations are something of a rarity, so while on my way to visit (the now defunct) Bambino Coffee in Crystal Palace, I was delighted to chance upon Brown & Green. It’s a lovely little place, tucked into the corner of the equally lovely ticket hall, built back in the days when railway stations were architectural statements in themselves.

Brown & Green plays a couple of important roles. First of all, it’s a place to grab coffee on your way to catch the train. While the coffee won’t have third-wave purists purring with delight, it’s a distinct notch up from the average station fare. Secondly, it’s a (self-styled) coffee-and-brunch neighbourhood café which just happens to be located in a railway station. It’s in this capacity that I visited Brown & Green.

The brunch menu isn’t extensive, but it’s pretty decent and I was impressed. A word of warning though: just be aware that if you are coming for lunch/brunch, the kitchen closes at 14.30 (a perfectly respectable time if you ask me) after which there is only a limited food menu available.

Finding Brown & Green was delightful serendipity. Crystal Palace’s Bambino Coffee had long been on my radar, but when I finally decided to visit I didn’t know that it had shut for good a week or so before. With that disappointment still ahead of me, I climbed the inordinate number of stairs up from the platform at Crystal Palace. I’d just come through the ticket barriers when my Coffee Spot radar kicked into action and I spotted Brown & Green off to the side of the gloriously high-vaulted ticket hall. I wandered over and, in need of lunch, realised that I had found the perfect place, the added bonus being that it meant that my trip to Crystal Palace would not end up wasted after all.

The only access to Brown & Green is through the afore-mentioned ticket hall: from the outside, it’s before the ticket barriers on your left. It has an interesting split-level layout: in the front (lower) portion, the lovely wooden counter dominates. This is to your left as you come in and encloses the tiny kitchen, where all the food is cooked. It also holds the coffee machine and cakes (lots of them!).

Opposite it are a couple of small tables, while beyond it steps lead up to the main seating area at the back. Brown & Green isn’t big, but with six tables (eight if you count the two “downstairs”) and a little table-bar (where I sat) scattered around, it feels spacious, helped by the high ceiling and generous windows. Indeed, for me, the architecture is a major draw, with high, brick arches around the windows and a lovely, eclectic mix of furniture.

Brown & Green styles itself as a coffee-and-brunch neighbourhood café, an offshoot of the original Brown & Green, which is more of a kiosk at Gypsy Hill Station. It certainly had a neighbourhood feel while I was there on a Friday lunchtime. While I suspect that it is busy with commuters in the morning, during the day it seems to revert to its neighbourhood roots, with a family, a group of friends and another solo person in for brunch during my visit.

The coffee menu is fairly standard, espresso-based fare, but it avoids the buckets-of-milk-with-a-dash-of-coffee mentality that ruins many an outlet. I was served up a perfectly acceptable flat white, nicely presented in a glass. I also had the veggie brunch, which was an interesting take on the classic all-day breakfast: fried egg, halumi soldiers (in place of sausage), a grilled tomato, rocket and a (small) bucket of beans, plus pre-buttered toast. If you are looking for food over-load, this is not the place to come, since the portions are modest. However, it was extremely tasty. In particular, the halumi soldiers make a nice alternative to veggie sausages or processed hash-browns (yuck). The bucket of beans is a good idea since it stops bean contamination. My only suggestion for improvement is to add a potato option (chips or sauté please).

The free Wifi at Brown & Green is a bonus, although in this case it’s from the station next door, so sit as close as you can to the ticket hall. I managed to get decent signal on my laptop while sitting as far away as possible, but my phone struggled!