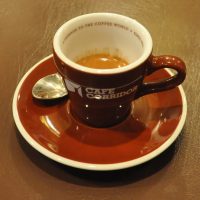 That I found the Café Corridor was down to a tip-off from Andrea Burton. Even then, I walked along the street four times before I found it! In Causeway Bay, in the heart of Hong Kong, it’s opposite the gleaming towers and soaring halls of Times Square, hidden in plain sight in the manner of Newcastle’s much-missed Flat Caps Coffee on Ridley Place. The only indication that it’s there is the sign above the entrance, which, fittingly, is a long corridor leading you to the café in a basement-like structure at the rear of the building, complete with outdoor seating in an enclosed courtyard at the back.

Café Corridor has been going since 2001, a forerunner of Hong Kong’s growing speciality coffee scene and, like many such coffee shops, it has a western-inspired menu/coffee. It’s part of small chain of five co-owned independent coffee shops, which includes N1 Coffee & Co. Roasting is provided by its parent (which I’ll call Barista Academy), although each coffee shop has its own beans. In the case of Café Corridor, this includes a house-blend and five seasonal single-origins which can be had as an espresso or filter through V60/Syphon/Aeropress. Iced versions are also available.

The Café Corridor occupies a cosy, rectangular, basement-like space, which, while technically not a basement, qualifies as one in my book. You enter via a long, narrow corridor from Russell Street, then descend three steps, which only enhances the feeling of entering a basement. You arrive at the left-hand end on one of the long sides, with the counter immediately to your left. Meanwhile, the seating area spreads off into the distance to the right. Despite the low ceiling, it looks a lot bigger than it is thanks to a mirror which occupies almost all of the right-hand wall. Seating is provided by nine two-person tables, four along the front wall, with the remaining five along the back. In each case, the pair closest to the mirror can be pushed together to form a four-person table.

The counter starts with the cake display at the front, while at the back, there’s a small, two-person bar against the counter which offers an excellent view of the espresso machine (off to your right against the back wall) and of the enclosed kitchen behind the counter. Like most Hong Kong speciality coffee shops (18 Grams, Causeway Bay and Barista Jam spring to mind), an impressive, western-based food menu, including all-day breakfasts, is prepared on-site in what seems like an unfeasibly small kitchen. There’s also a large selection of western-style cakes.

At the back, just to the right of the counter’s end, a door leads to an enclosed, sheltered courtyard, which would make the ideal outside seating area, except that while I was there, it was full of smokers. A pair of chairs are opposite the door, while to left and right are a handful of two-person tables, four on the left (plus a bench) and two on the right.

I popped in on my first day in Hong Kong for a very old-school espresso made with the house-blend. This was dark-roasted and quite bitter: the only positive thing I will say is that it was pulled beautifully short, but otherwise it really wasn’t to my taste. I paired this with an apple crumble tart, served warm, which, in contrast, was very much was to my taste. With a sweet, generous apple filling, rich, crunchy crumble and excellent shortcrust pastry, it was divine.

I returned two days later when I discovered the five single-origin coffees displayed in old spirit bottles on the counter. There were two Ethiopians, one washed (Kochere), and one natural (Aricha), plus two naturals (a Brazilian and a Colombian) and a honey-processed Guatemalan. Of these, the Colombian and one of the Ethiopians (Kochere) were available as an espresso, while all five could be had as a filter.

At the barista’s suggestion I tried the Colombia, a Huila Finca La Illusion, as an espresso. This was much more to my tastes, a lighter roast, which produced a well-balanced, smooth shot with plenty of flavour. I could also have had a split shot (espresso and piccolo) but I discovered that too late. Oh well, there’s always next time!

Finally, the barista gave me a sample of the cold brew, made with the same beans. Regular readers know that I’m not a fan of cold brew, so in that light, this one was surprisingly good. I wouldn’t go as far as to say I liked it (in that I wouldn’t order it) but it was very drinkable, avoiding that specific taste I normally find in cold brew and dislike intensely!

You can see what Andrea Burton made of Cafe Corridor and a host of other Hong Kong coffee shops in her post for Virgin Atlantic.