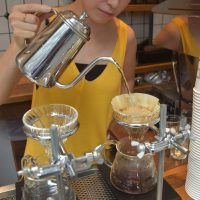 Yesterday, I wrote about About Life Coffee Brewers, a lovely coffee stand in Shibuya, next door to both my office and my hotel for the week I was working in the area. Using the rear entrance to Shibuya’s Mark City (my hotel was on top of this long, thin shopping mall) and turning right, the office was a two minute walk down the hill. However, left, if I turned left, About Life was two minutes up the hill. So, naturally, I started my day by going to About Life for coffee…

One of the frustrations of being a coffee blogger is that I rarely go back to places on a regular basis, nor do I get to sample the full range of coffee on offer, particularly somewhere like About Life, which has six single-origins available as either pour-over or espresso. However, it struck me as I ordered my two-shot latte on the first morning that there were no other decent coffee options near the office and, with two or three long breaks each day, there was every chance I could actually sample all the coffee.

So, I set myself a challenge: to try all six single-origin coffees in a week…

Before we get onto the single-origins, I could have just as easily called this post “Four two-shot lattes in a Week”, since that’s how I started each of my four days (it was a public holiday on Monday, so we worked Tuesday – Friday). While I start the day with a filter coffee at home (usually an espresso blend through my cafetiere), when out and about, I like to get things underway with a flat white or equivalent, hence I turned left every morning and popped by About Life Coffee Brewers for a two-shot latte.

These, I have to say, were excellent. About Life serves milky coffees using a blend from its parent, Onibus Coffee, which, while I was there, was the BFW, a mix of Honduran and Guatemalan beans (and different from the Step Blend I was served when I visited Onibus in Nakameguro a few days earlier).

The other thing About Life does which pleases me no end is not use too much milk. I’m currently travelling with my (relatively) new Eco To Go Cup and road-testing the Global WAKEcup, a new cup for me, essentially a metal travel mug, but with a bamboo skin, which looks absolutely gorgeous (the handle is also a big plus). Both are around the 9oz size, which is slightly bigger than I’d like, but each morning, the various baristas at About Life resisted the temptation to fill the cup to the top and instead made a 6oz latte, which, for me, is a great ratio of coffee to milk: enough for a reasonably long drink, but not so much that the milk dominates the flavour. The result was a series of excellent lattes (although I defy anyone served these blind to tell the difference between them and a flat white) which set me up for each coming day.

That aside out of the way, what about the single-origins? About Life uses three Tokyo-based roasters, its parent, Onibus Coffee, Switch Coffee Tokyo and Amameria Espresso, with two single-origins from each. These are listed at the bottom of the menu and to keep things simple, I decided to start at the top and work my way down.

I popped back on Tuesday afternoon to get the process under way with the Honduras La Fresa from Switch. I could have tried the single-origins as espressos, but I wanted something longer that I could take back to the office with me, so decided to go with pour-overs instead, About Coffee using the V60.

In a good sign, the barista wasn’t happy with the first V60 she made as the coffee was coming through too quickly, so she made me a second one, a nice, well-balanced coffee. I also discovered something else about About Life: if you come back for a second (or third) coffee in the day, as long as it’s a black coffee, it’s half price! How cool is that, particularly for someone who starts his day with a latte? Although imagine how gutted I’d have been if I was in the habit of ordering a filter coffee in the morning and a latte at lunch time…

Things really got underway on Wednesday when I snuck out after lunch and then again in the afternoon for coffees two and three. These were, respectively, a Rwanda Nyarusiza from Onibus and a Colombia El Campo from Amameria. The Rwandan was very smooth and fruity, but I wasn’t a huge fan of the Colombian, which could have done with more body, although it improved markedly as it cooled.

I repeated the twice-a-day pattern on Thursday, when I also switched to my WAKEcup. Another thing in About Life’s favour is that every time, without fail, my cup was given a proper rinse with hot water, then dried and then pre-warmed before my coffee was served. It’s the little things that make all the difference.

The first three single-origins had been washed coffees, but the first of Thursday’s offerings was naturally processed, a Brazil Sitio Da Torre from Switch, which was okay, but I had expected more from a natural so was a little disappointed. In the afternoon I had the first of two Ethiopians, a Chelelectu from Onibus, another washed coffee, resulting in another well-balanced coffee.

I had deliberately left myself just one coffee for Friday since meetings often end early on the last day as people rush off to catch flights. So it proved and I only had one break which I used to try the last of the single-origins, a naturally-processed Ethiopia Shakiso from Amameria. It turns out that I had unintentionally saved the best to last since this was a lovely coffee, with plenty of body and subtle fruitiness.

And there you have it, six single-origins (and four lattes) in a week.

5 thoughts on “Six Single-origins in a Week”