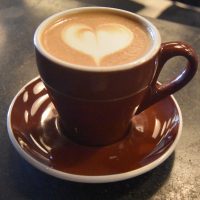 My first taste of Nozy’s coffee was at the lovely Nem Coffee & Espresso during my first visit to Tokyo in April 2017. I also walked past The Roastery, on Tokyo’s famous Cat Street, while taking a circuitous route back from the office, but I didn’t have time to stop. However, The Roastery was high on my must-visit list on my return, so a week ago today, I headed out early to beat the crowds, making a bee-line for The Roastery.

With the odd exception (Blue Bottle Coffee in Aoyama for example) the speciality coffee shops I’ve visited in Japan have been small. The Roastery bucks that trend, occupying a large space set back from the street, with a large outside seating area and a similarly-sized interior which doubles as a roastery, producing all Nozy’s coffee.

The coffee offering is just as big and impressive. There are no blends, just two single-origins for the limited espresso menu and another eight on pour-over, while you can buy all the beans to take home in retail bags of various sizes. There’s a small range of sweet and savoury snacks, plus perhaps the biggest draw of all in summer: soft-serve ice cream.

Tokyo’s famous Cat Street (Jingūmae) runs roughly north from Shibuya towards Omotesando, a narrow, mostly pedestrian space lined with three- or four-storey buildings, making it a delightful space to wander. Set well back from the street, The Roastery occupies the ground floor under a restaurant at the end of a shady, secluded courtyard, about half of which shelters under an extended, concrete porch with plenty of seating on either side. Sitting outside was tempted, but with the blistering sun, 33⁰C temperature and high humidity, I sought refuge in the cool, cavern-like interior.

You enter at the back of the courtyard, under the overhanging porch. The front, made of two pairs of glass double doors, provides the only natural light. There’s a small, wide, corridor-like entrance, a bench on the right and a bar on the left, the counter dead-ahead. The Roastery goes a long way back and the lozenge-shaped island counter, running front to back, dominates the front two-thirds, while the back is given over to the roaster, a 12 kg Probatone.

Twin tills flank the cake display where you order here, before finding a seat. You can sit at the counter itself, on low-backed bar chairs. There are two on the right and four along the back.  There’s more seating along the walls, mostly to the right, where the space opens out a little. An L-shaped bench occupies the front corner, with four narrow shelf-tables, each with a pair of bar-chairs, further along the wall. On the left, two very narrow, standing bars are against the wall, then, at the back, a high, four-person table stands behind the counter.

Beyond this is the territory of the roastery, a split counter separating it from the rest of the space. There’s a pour-over operation on the right, jars containing the single-origins on offer laid out in a row. On the left, behind the four-person table, the counter’s second part doubles as a retail unit. Between them, a gate gives access to the roaster, on the left, while preparation and packing is on the right. Despite the roaster being in full swing while I was there, the interior was delightfully cool, while the light is best described as subdued.

The limited espresso menu offers espresso, Americano, or latte (8, 12, 16oz) with a choice from the two single-origins. During my visit, these were a Honduras La Bonita or, for slight premium, a Burundi Kibingo Cup of Excellence winner. I had the La Bonita in an 8oz latte, slightly too large for my tastes, but nevertheless good, the coffee, with its more classic notes, going very well with the milk. This was served with a glass of iced water, topped up throughout my stay.

I also ordered a NY Ring, basically a double-thickness doughnut, for breakfast, which was excellent. Very sugary, it was crunchy on the outside, soft on the inside.

I decided to try the Cup of Excellence, ordering it as an espresso, served in an awesome glass with a glass of sparkling water. This was a gorgeous coffee, which would have been a crime to drown in milk. Far too often I find the very high-end coffees a bit of a let-down since I don’t really have the discernment in my palette to work out what makes them so special. However, this one didn’t disappoint for, while I didn’t pick out any specific notes, it was a really rich, beautifully well-balanced coffee, so smooth and a real pleasure to drink.

I rounded things off with a helping of the soft-serve, a lovely, creamy concoction that saw me on my way.

You can see what the Commodities Connoisseur made of The Roastery in Part 3 of his excellent Tokyo coffee series.

4 thoughts on “The Roastery by Nozy”