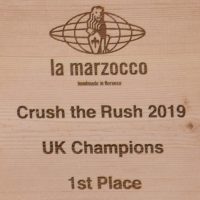 Regular readers may well be aware of my dislike of barista competitions. Now, I will say at the outset that this dislike only really extends to my watching them: events such as the Barista Championships and Brewers Cup are vital, helping both the careers of those who have competed and the wider industry in terms of spreading knowledge and innovation. I value them immensely and have, in the past, supported initiatives such as the Beyond the Bean Barista Bursary. I just don’t enjoy watching them.

Until last weekend, there was one exception to this: the Cup Tasters Competition. Then I went to La Marzocco’s Out of the Box event at Tonbridge, which not only redefined my conception of what a coffee event could be, it introduced me to Crush the Rush, a new barista competition from La Marzocco. This first saw the light of day in the USA last year, but as far as I know, this was the first time it’s been seen on this side of the Atlantic. It’s a pretty simple concept: two teams race each other to produce eight different espresso-based drinks, testing their barista skills on a busy bar. But is it interesting to watch?

The basic set up for Crush the Rush is simple: two teams of three baristas go head-to-head to see who will be the first to deliver eight espresso-based drinks, chosen at random by the computer (each team having the same set of drinks). These include one with alternative milk (oat milk in this case) and one to-go order (in a KeepCup, I was pleased to note).

Each team has two judges. The first one is technical, ensuring that each shot is correctly weighed and that the extraction times are within allowed parameters. Once a drink has been made, it’s delivered to the second judge who ensures that it’s the correct drink, delivered in the right order and that it’s properly presented: that is, no spills or drips and no half-filled cups. If the drink passes muster, there’s a ring on a conveniently-placed bell; if it doesn’t, a sharp blast on a whistle and the drink has to be remade.

Each team worked on an KB90, La Marzocco’s latest flagship model, with a single La Marzocco Vulcano grinder. They had eight minutes to dial in their coffee, and then off they went, which is when things got interesting. There’s a real spectacle here, with the two teams working feverishly behind their respective espresso machines. Initially, nothing much happens, although behind the scenes, beans are being ground, shots weighed and milk steamed. Then comes the first drink, the barista carrying it gingerly across the uneven floor, trying not to spill it, before placing it on the table. Then comes the moment of judgement: will it pass to the ring of a bell, or will the dreaded whistle send it back?

Much of the fun comes from the antics of the judges (from Clockwork Espresso and Espresso Solutions), who made it into a real performance, with exaggerated checking of the cups and enthusiastic bell dinging and whistle blowing. The excellent commentary helped, building on the sense of excitement, while it was very obvious to the crowd who was winning as the number of drinks built up in front of the judges.

But who won and went away with the coveted trophy? You can find out after the gallery.

I ended up watching the two semi-finals, followed by the finals, where the hometown team from Cast Iron Roasters and Tonbridge’s 65mm Coffee went up against old friends, The Roasting Party. Talk about having split loyalties!

In the semi-finals, the teams had an additional task to the eight drinks: they had to prepare a serving of smashed avocado on sourdough toast. In the first semi-final, the Cast Iron/65mm team cruised through, while in the second, the Roasting Party came good despite having their avocado toast sent back by judge Pete from Clockwork Espresso who deemed the avocado sliced rather than crushed. He’s a hard man to please!

Then it was onto the final. Both semi-final winners had been on the left-hand machine in their respective rounds and I don’t know if there was a coin toss, but Cast Iron/65mm got the favoured left-hand machine for the final. I spent most of my time up and around the judges table, but it would have been fascinating had there been seating behind the espresso machines since I’d have loved to watch the baristas at work.  Some of the teams obviously had set roles: one working the grinder and pulling shots, a second steaming milk and the third delivering, while others had a more fluid approach, each doing whatever job was required there and then.

The final started off with the two teams matching each other drink for drink in the early going. However, the final starting going the way of the two semi-finals and favouring the left-hand machine. Slowly the Cast Iron/65mm team began to pull away from the Roasting Party, and after the first four drinks, they never looked back, being crowned champions to popular (local) acclaim.

At the end of the day, the competition was immense fun, with all the competitors and judges adding to a light-hearted atmosphere. Make no mistake though, this was a real test of the baristas’ skills, both individually and in their collective ability to work as a team. There was also something worth playing for: a trophy, a cash prize and, perhaps best of all, custom-made Push tampers from Clockwork Espresso!

4 thoughts on “Crush the Rush”