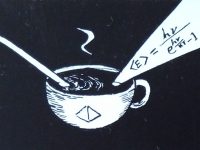 Four weeks ago, I spent a very pleasant Tuesday evening at Amoret Speciality Coffee in Notting Hill, learning all about the properties of foam. Specifically, milk foam, in case you were wondering what this has to do with coffee. I was at the second Coffee & Science evening, organised by fellow coffee blogger, Bean Thinking, aka Karen, who (when not engaged in the important business of blogging about coffee) spends (some of) her time as a research physicist at Imperial College.

The Coffee & Science evenings are a series of informal events held on a (roughly) monthly basis, hosted by the lovely Sadiq of Amoret Coffee and organised by Bean Thinking. The next one is this Tuesday (22nd October) and is all about the science of espresso extraction. Karen is keen that the tag “science” doesn’t put anyone off: the events are fun, friendly, practical, and, most important of all, you don’t need a background in science to attend! Coffee & Science is open to anyone with an interest in coffee and science behind it.

In the meantime, if you’ve ever wanted to know why milk foams (or sometimes doesn’t), which milks foam the best, and how non-dairy milks compare, read on!

You can see what we got up to after the gallery.

The Coffee & Science evenings are held at Amoret Speciality Coffee on Pembridge Road in Notting Hill. Amoret is a lovely coffee shop, spread over two floors, with a roastery at the back. It will, I promise, feature on the Coffee Spot. One day…

The evenings officially start at 18:00, although you’re encouraged to arrive at 17:30 and, if possible, to sign up on the FB events page or by emailing Bean Thinking so that Karen and Sadiq know to expect you. Sadly, Amoret closes at four o’clock on Tuesday afternoons, so you can’t pop in for a coffee and then hang around until the Coffee & Science event in the evening.

Each event features a guest speaker, a scientist with a particular interest in the area under discussion. Things get underway with Sadiq brewing some coffee (a V60 of a naturally-processed Ethiopian Dari Hambella Guji while I was there) and then, while everyone’s sampling that, the guest speaker gives a short talk to introduce the science behind the subject. Then things move to the practical side of the evening. As I said in the introduction, everything’s very informal, more of a chat than a lecture. Last month, there were about 20 of us there, including the speaker, Sadiq and Karen.

Last month’s Coffee & Science evening was all about foam. We’ve all seen the lovely latte art that baristas produce, something you can’t do unless you have a thick, stable micro foam in the milk. When done well, this foam can last a long time, holding the pattern all the way to the bottom of the cup (although that does require you to sip your coffee and definitely rules out stirring it!). But what makes a good foam? And why do some foams last and others collapse within a minute or two? And do different milks, including plant-based ones, foam differently and why?

These were all questions we set out to answer that evening, which you can read about after the gallery.

The guest speaker was Professor Jan Cilliers of Imperial College, an expert in the structure of froth. He gave a fascinating talk about froth (aka foam), describing what it is and why milk, in particular, froths so well and, conversely, what can go wrong with your foam (of crucial interest to us home baristas).

At its simplest, foam consists of bubbles suspended in a liquid. For our discussion, a key component are the proteins in milk. Heating the milk changes the shape of the protein (a process known as denaturing), which leads them to migrate to the surface of any bubbles (the interface between gas and liquid). This helps stabilise the bubbles by keeping the surface intact. In turn, this helps prevent them from bursting.

Another property of bubbles is that not all bubbles are created equal. Smaller bubbles have a higher internal pressure, which means that gas diffuses out of smaller bubbles and into larger ones. The larger ones, in turn, get even bigger, have a lower pressure, when then leads to more diffusion. In layman’s terms, the large bubbles eat the smaller ones!

Therefore, one of the ways to make a stable foam is to ensure that all the bubbles are of equal size. That’s why you’ll see baristas banging milk jugs after steaming: this collapses the larger bubbles and helps make the foam more uniform.

As I said earlier, foams consist of bubbles suspended in a liquid, so a foam will collapse if the liquid drains away. The denser the liquid, the more slowly it drains, so the longer the foam will last. In really dense liquids, foams can last for months, which makes my example a flat white holding its latte art to the bottom of the cup sound far less impressive!

So that’s the theory, but that about foams in practice? Foams in milk, at least in the coffee world, are produced by steaming the milk, which is two distinct processes in one. The first is the heating of the milk, while the second is incorporating air into the milk. This is the part which creates the bubbles and hence the foam.

However, incorporating the air doesn’t happen by itself. If you put the end of your steam wand in the bottom of the jug and turn it on, you’ll get warm milk and nothing else. Firing hot steam through milk doesn’t incorporate air into it. If you want to foam the milk, the tip of the steam wand needs to be just at or below the surface of the milk. This disrupts the milk, drawing air into it.

Steaming milk is a definite skill by the way. Incorporate too much air, for example, and your foam will be dominated by large bubbles, which, as we’ve discussed, will lead to a poor foam. Similarly, if you put too much steam (ie heat) into the milk, you’ll ruin the flavour by burning the natural sugars in the milk.

Fortunately, we had an expert on hand (Sadiq, of course), who set about steaming various different milks so that we could see what happened.

You can see the results after the gallery.

Milk comes in all sorts of varieties, so the first part of the practical session was to explore how different milks foam. The main thing is fat content. Fat helps increase the milk’s density, which, as we’ve discussed, helps keep the foam stable. However, there’s a price to pay: fat interacts with the protein in milk, reducing its presence in the surface of the bubbles, hence accelerating the breakdown of the foam.

Processing also plays a part. Most milk you find in supermarkets is homogenised. That is, the fat, which naturally floats to the top, is broken into smaller particles, so it is evenly distributed throughout the milk. Unfortunately, these small fat particles do an even better job of attracting the proteins, which would otherwise work their magic stabilising the surface of the bubbles.

To see which milk steamed the best, Sadiq used:

Up against these were three non-dairy milk alternatives:

Sadiq steamed a sample of each which was then left to stand on the counter in a glass to see how well the foam was retained.

The good news is that, with the exception of the coconut milk, they all initially produced a good foam: for the coffee shop purpose of making a flat white with good latte art, all would do in a pinch. However, it soon became apparent that the non-dairy alternatives weren’t as long-lasting as the dairy products, with the coconut milk in particularly quickly breaking down, followed by the Rude Heath Barista Oat milk.

Professor Cilliers explained that the Rude Health Barista milk contains a seaweed additive which helps the foaming. Seaweed, as it breaks down, naturally produces foam (If you’ve seen foam on the surface of the sea, its usually the result of seaweed). Although it helped the milk to foam in the first place, it wasn’t very useful in producing a long-lasting, stable foam, with the other oat milk doing far better.

However, the real winners were the dairy milks, although the big surprise was that the most stable foams were the lactose-free and skimmed milks, which foamed really well in the jug and held the foam the longest. That said, particularly in the case of the skimmed milk, the foamed and unfoamed milk quickly separated and, from a customer standpoint, it had a very poor mouthfeel. At the other end of the scale, there wasn’t a great deal of difference between the homogenised and unhomogenised full-fat milk.

So, there you have it. On the basis of this one-off experiment, dairy milks steam the best, while if you want a stable foam that tastes good, you might be best off with full-fat or semi-skimmed milk.

And with that, the evening was over. Sadly I can’t make the next one (on espresso extraction) but check out Bean Thinking’s page for the upcoming schedule and hopefully I will see some of you there in the future.