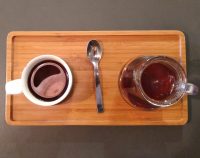 Last weekend’s return to Dublin was marked by a combination of new places (such as yesterday’s Coffee Spot, First Draft Coffee & Wine) and new locations of old favourites (such as 3FE Sussex Terrace). Today’s Coffee Spot sees me back in Coffeeangel, whose HQ branch was a big hit with me when I was last in Dublin. This time it’s the turn of Coffeeangel TCD (which stands for Trinity College Dublin), on Leinster Street, which runs along the southern edge of Trinity College’s city-centre campus.

Coffeeangel, which began with a pair of coffee carts, is one of the veterans of Dublin’s speciality coffee scene. These days the coffee carts are no more, Coffeeangel having moved into bricks and mortar, now with five city-centre stores. TCD is a relatively compact affair, with outside seating, a counter at the front and a cosy seating area at the back. All the coffee is roasted exclusively for Coffeeangel by Bailies in Belfast. There’s a house-blend on espresso, served via a concise menu, joined by two single-origins, available on espresso or pour-over, the latter using a V60 on the Marco Beverage Systems SP9. If you’re hungry, there’s a wide selection of cake and sandwiches.

Coffeeangel TCD is on the south side of Leinster Street, busy with city-centre traffic. There’s a generous outdoor seating area on the broad pavement, with six two-person tables sheltering under a broad awning, separated from the rushing pedestrians by a pair of waist-high barriers.

Coffeeangel has a single floor-to-ceiling window with the glass door on the right. Inside, it’s a compact space, a masterpiece of how to accommodate plenty of seating without feeling overcrowding. The shop is split into front and rear sections, with the counter in the front and the bulk of the seating in a slightly smaller section to the rear. The two are separated by a low, wooden barrier topped by a long mirror. There’s another narrow mirror high up on the back wall, which runs its full width and helps make Coffeeangel feel bigger than it is.

Returning to the front of the store, the counter is on your left as you enter, starting at the window and occupying maybe 60% of the depth of Coffeeangel. The first part is a large display cabinet, packed with sandwiches and cakes, followed by the till, where you order, then the grey, La Marzocco FB80 espresso machine. Finally, there’s the collection area where you pick up your coffee, next to the Marco Systems SP9.

Opposite the front of the counter is a tall, six-person communal table with high stools, three on each side. There’s a set of retail shelves on the right-hand wall behind the table and, further back, a water/takeaway station with more retail above opposite the espresso machine.

The rear section starts beyond this with a row of four two-person tables running along a padded bench against the right-hand wall. This has a small, L-shaped extension at the front (by the water station) and runs almost to the back of the shop, stopping just short of the back wall, allowing for a doorway to the toilets.

The remaining seating is on the left. There’s another L-shaped bench running along the back of the divider separating front and back, before extending a little way along the left-hand wall. This has a row of three two-person tables in front of it, while there are three more two-person tables in front of a straight, padded bench against the back wall.

Although there’s plenty of natural light from the front window, Coffeeangel is north-facing and partly shaded by awning. By the time you get to the back, it would be quite gloomy without the numerous lights which hang down from the high ceilings, one per table. There are also plenty of lights in the front for those rare Irish days when the sun doesn’t shine.

All the coffee is roasted for Coffeeangel by Bailies Coffee Roasters. Fórsa Gála (Gale Force) is the seasonal house-blend, with the single-origins are served until they run out (which can be up to six months depending on the size of the lot). There’s also decaf (currently from Colombia) and an autumn blend (Solas Ísliú) which is only available for retail.

I opted for the Gakui AA Kenyan single-origin as a pour-over, served in a small, glass carafe with an equally small pottery mug on the side, all presented on a compact wooden tray. The coffee itself was really fruity, with classic Kenyan berry notes, but subtle, rather than punchy. I paired this with the last custard tart, which was excellent, with a rich, creamy custard filling and a flaky pastry case.