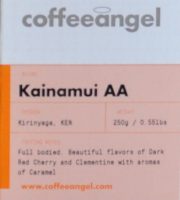 Coffeeangel is a well-established chain of Dublin speciality coffee shops that started with a coffee cart on Howth’s East Pier and, at the time of my visit, consisted of two carts/kiosks and four shops, although since then the two carts have gone, while a fifth shop, Coffeangel IFSC has opened.

I failed to visit Coffeeangel on my first trip to Dublin in 2014, so on my return last month for the World of Coffee, I was determined to pop in. In true Coffee Spot fashion, having never visited any branch of Coffeeangel before, I decided to start with Coffeeangel HQ, which stands in the heart of Dublin on Trinity Street, and which had opened a mere three days before my visit…

Coffeeangel HQ is unusual in that it’s standing room only, its relatively spacious downstairs uncluttered by tables and chairs. Please don’t let that put you off though, since the coffee, all roasted by Belfast’s Bailies Coffee Roasters, is excellent and served in proper cups (while you can’t sit down, you can stand at one of several broad counters to drink it). There’s the seasonal house espresso-blend, Fórsa Gála, plus decaf and a pair of single-origins which can be had as either espresso or pour-over. There’s also tea, hot chocolate and a selection of cake.

All of the Coffeeangels have letters following their names, giving an indication of their location (for example, Coffeeangel TCD is opposite Trinity College Dublin). All the branches, that is, with the exception of Coffeeangel HQ, where the HQ (not to be confused with Coffeeangel CHQ on Custom House Quay) stands for Headquarters for reasons which will soon become clear.

Occupying a beautiful (and listed) building on Dublin’s Trinity Street, the store front is effectively a single window between two ornate sandstone pillars, with the door, flanked by another pillar, to the right. If I ran a Coffee Spot Award for “Best Windows”, Coffeeangel HQ would be an instant contender.

Having described Coffeeangel HQ as standing-room only, the pedant in me is obliged to note that a pair of benches sit in front of the window on the pavement outside. However, step inside and you won’t find a single seat, just a beautifully-appointed interior with the counter occupying the entire left-hand wall. To your right is broad-topped counter, where you can stand to drink your coffee, while at the back, another counter-top displays the generous selection of cake. An island counter stands in the centre, housing the takeaway cup lids and a water tap amongst other things.

In the far corner, diametrically opposite the door, an open archway leads to a flight of stairs, which sweeps tantalising upwards. Meanwhile, tucked away out of sight to the right is the doorway to Coffeeangel’s retail room, which is set up a like a brew bar, another broad counter at the back. The walls, meanwhile, hold all sorts of coffee brewing kit. If, for example, you want to buy a pour-over filter, but can’t choose between V60 or Kalita Wave, rather than just talking about their relative merits, the staff can use the back room to demonstrate them to you, or let you have a play. Now that’s customer service!

Sadly the two upper floors, accessible via the stairs, are staff-only, but the lovely Gábor gave me a behind-the-scenes tour. The first floor holds the boardroom (hence HQ) which, when not being used for internal meetings, can be hired out. Also for hire, at the front of the building, is the sumptuously-appointed function room, where I had the most serious case of window envy. Finally, the top floor holds the training room, currently for internal use only. However, should Coffeeangel ever decide to run public training courses, then book yourself in for one, if only to get a look at the room…

Back downstairs, it was coffee time. Coffeeangel’s the first place I’ve seen with functional Marco Beverage Systems SP9 brewers. Although tempted, I was won over by one of the single-origins, a washed Kenyan Kainamui. This was the same bean I’d had a few hours earlier as a filter at Roasted Brown, only roasted for espresso. At Gábor’s recommendation I had it as a tasting flight of espresso/cappuccino.

The espresso was lovely, fruity and bright, but very well balanced, lacking that punched-in-the-mouth feeling that, for me at least, sometimes mars Kenyan espressos. In milk, it also excelled, the sweetness of the milk taming the coffee a bit, but without clashing with it, resulting in a very smooth drink. All-in-all, an excellent, all-round coffee.