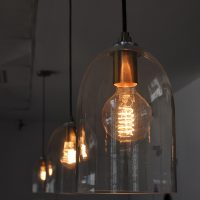 Roasted Brown is a relatively established player in Dublin’s speciality coffee scene, roasting its own coffee and serving it from a bright, spacious spot on the first floor of the Filmbase building in the heart of Dublin. It’s fairly easy to find once you know it’s there, although, being on the first floor, there’s no street-level presence other than the name on the door.

The space itself is amazing, effectively a light well in the centre of the building, reaching all the way to the top of the third floor, where a glass ceiling thankfully keeps the rain off. There’s plenty of seating, although Roasted Brown has sensibly not tried to pack too much in, retaining the sense of space afforded by the high ceiling and aided by one of the walls being almost entirely glass!

Roasted Brown only roasts single-origins, with one option on espresso and three on filter. These are changed every week or so and are all available through the Kalita Wave filter. There are also cold coffee options. This backed up with an interesting selection of sandwiches and cakes, while if you fancy something else, there’s loose leaf tea or, for the sweet(ish) tooth, hot chocolate.

December 2016: Roasted Brown left the Filmbase Building to concentrate on roasting, where it’s still going strong (I briefly called into the roastery in Delgany on my return to Ireland in 2019). The cafe carried on, taken over by First Draft Coffee & Wine, which subsequently moved to Lennox Road in Portobello, south of the centre, when the Filmbase Building closed in 2018.

Just off Dublin’s famous Temple Bar, you’ll find the disappointingly straight Curved Street, and, on its corner with Temple Lane, the modern Filmbase building. Head inside, go upstairs and, taking up almost all of the first floor, there’s Roasted Brown. The seating spreads out directly ahead of you, the counter tucked away to the left, behind you as reach the top of the stairs. If you want to chat with the barista, there’s a bar here, opposite the counter. Otherwise, once you’ve ordered, do an about-turn and grab a table.

An eight-person communal table occupies the middle of the space, while to the right, three high, six-person tables line the windows which make up the wall, flooding Roasted Brown with a (while I was there at least) murky grey light. At the far end, there’s a sofa and a couple of armchairs, while to the left, tucked away behind the lift is a long bar running along the wall, which is where all the power-outlets are. There are also a couple of high, square tables here, one by the lift, another the stairs at the back which lead Filmbase’s upper levels.

While Roasted Brown’s a relatively well-established name, it’s been a long, slow road starting with a coffee cart. Next was the move into Filmbase, then, finally, came roasting. Even that wasn’t plain sailing, with Roasted Brown using the facilities at Notes in London, owner and head roaster, Fergus Brown, flying over every fortnight to roast his beans. However, in September 2015, Roasted Brown opened its own dedicated roastery in Co Wicklow. You’d think that would be enough upheaval, but Filmbase has recently been closed for four months, undergoing a major refurbishment, forcing Roasted Brown back to its roots on the streets. Fortunately, it’s back indoors and, for good measure, has embarked on another chapter of its story with a second shop, Laine my Love.

Returning to Roasted Brown for a moment, the fact you’ve come to a specialty coffee shop is apparent as soon as you set eyes on the menu, which lists the coffee by origin/processing method, plus, for the filter options, the varietal. These are joined by various cold coffee options, including cold filter coffee, cold flat white and cold long black. I didn’t ask. Finally, there’s loose-leaf tea and hot chocolate. The pricing structure is interesting too: espresso comes black or with milk (no sizes or names), while each filter coffee is individually priced.

During my visit, there was an Ethiopian Haricha natural on espresso, while for filter, the choices were a natural Ethiopian or a pair of washed coffees, one from Colombia and one from Kenya. Spoiled for choice and wracked with indecision, I put myself in the hands of Jarryd, my lovely and very capable South African barista. He recommended the Kenyan and a short while later, it appeared at my table, served in a glass carafe with an enamelled, handless mug. It was a lovely coffee, quite bright, but well-balanced, with just a hint of sweetness. It also matured nicely as it cooled.

Having arrived mid-morning without having eaten, I had a carrot and beetroot sandwich which I opted to have toasted. Served on a wooden slab (sorry plate-people), it was very tasty, the bread, in particular, having a wonderful crunch to it.

For those who are interested, a few hours later, I had the same Kenyan coffee, a Kainamui AA, at Coffee Angel HQ, only this time it was roasted as for espresso.