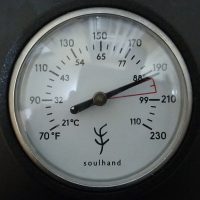 Readers with a long memory will recall that it was almost exactly five years ago that I wrote about my Bonavita gooseneck kettle, marking the point at which I became a firm gooseneck kettle enthusiast. Since then I’ve added a number of gooseneck kettles to my arsenal, including a basic electric model from Bodum, which I keep at my father’s house, and a pouring jug with a gooseneck spout, which I use exclusively for travel. And now I’ve added a fourth, a gift from Soulhand, a US company, which offered me a gooseneck kettle with a built-in thermometer (the good news is that Soulhand ships direct to the UK).

I’ll be honest: I wasn’t sure I was going to like it. Unlike my previous kettles, which have been electric, this is a stovetop model, which works on a hob, and which felt to me like a backwards step. On the plus side, there’s the built-in thermometer, which is one of things that I didn’t realise I needed until I used it (much like the gooseneck kettle itself). In the end, it won me over and I learnt a few useful things along the way, which was a bonus.

September 2021: since publishing this article, I’ve revisited the question of my electric kettles and I’m pleased to report that they actually heat the water to around 94°C, which is more in line with my expectations. Apologies for the original error, which was down to a poor experimental technique.

You can see what I made of my new Soulhand gooseneck kettle after the gallery.

Before I discuss the Soulhand, let’s talk about the other kettles I own. The one that started me off, the Bonavita gooseneck kettle, is an all-singing, all-dancing temperature-controlled model. You can set it to a specific temperature and it will heat the water to that point and hold it there. In contrast, the Bodum kettle, which I bought to use while I’m at my father’s house, lacks the features of the Bonavita. Instead, the Bodum simply boils the water before automatically switching off, just like a normal electric kettle. On the plus side, it pours just as well and was one third of the cost!

At the other end of the scale is my simple pouring jug with a gooseneck spout, which I use exclusively for travel. In theory, I could use it to heat water on a hob like the Soulhand, but in practice, I invariably use a kettle to heat the water, then transfer it to the jug for pouring. It too pours well, but has a limited capacity (360 ml versus one litre for the other two). On the other hand, it was a third of the price of the Bodum!

I was very happy with this set up until, over the summer, disaster struck: my Bonavita stopped working! Fortunately, at roughly the same time, an e-mail arrived from Soulhand offering me a new kettle… You might have thought that I would have accepted immediately, but I actually dithered.

When I got it, I was very enamoured with the temperature control feature of my Bonavita, but since then I’ve become a devotee of James Hoffmann’s YouTube Channel. One of his many excellent videos is on brewing coffee with boiling water, so when my Bonavita broke, I decided not to worry, instead boiling water with my regular kettle (which I’d kept), pouring it in the Bonavita, then using that for my pour-over, much as I did with my travelling gooseneck jug.

For a while, that worked fine, using the Bodum at my Dad’s and the regular kettle/Bonavita combination at home. However, I eventually crumbled and said yes to Soulhand, largely because I thought that the kettle would work well at my Dad’s, which has an electric hob. The new kettle, which Soulhand shipped direct to the UK, arrived two weeks ago. However, before using it in anger, I thought I’d try a little test, which you can read about after the gallery.

I boiled some water in my regular kettle, using part of it to warm up the Soulhand. I then discarded that water, re-boiled the regular kettle, then poured the water straight into the Soulhand, finding that the Soulhand thermometer read just under 88°C! I repeated the experiment several times, even using different eletric kettles (my Bodum and the kettle at my Dad’s) and each time the temperature was between 85°C and 88°C, well off actual boiling point.

Although I wasn’t expecting 100°C, I really did think it would be in the high 90s and was very disappointed with the results. However, I should have been more sceptical. This finding gnawed away at me for a couple of weeks, before I decided to redo the experiment. However, this time, rather than using a small amount of water to warm the Soulhand kettle, I poured the entire contents of the electric kettle into the Soulhand, then poured it back into the electric kettle, reboiled it and put in back in the Soulhand.

The result? Consistently around 94°C. I repeated it with all three kettles (my Dad’s, mine and the Bodum) and got the same results every time, which was much more in line with what I was expecting. It turns out that I had significantly underestimated the amount of heat required to thoroughly warm the Soulhand, so in my original experiment, even though I had warmed the kettle, it wasn’t enough and when I poured all the water in the second time, the Soulhand was still adsorbing much of the heat, hence the lower temperatures.

Just to be on the safe side, I ran one last experiement, this time repeatedly boiling the electric kettle, pouring the entire contents into the Soulhand and then returning it to the electric kettle to be reboiled. I stopped after three consecutive attempts where the temperature was at 94°C.

With that out of the way, you can see what I made of the Soulhand gooseneck kettle after the gallery.

Out of the box, the Soulhand is a pretty standard gooseneck kettle, with a similar dome shape to my Bonavita, although it’s matt black, in stark contrast to my plain metal Bonavita. It has a practical capacity of one litre, which is comparable to both my Bonavita and Bodum. If you’d prefer something else, Soulhand has a few alternatives when it comes to size and shape, although they’re all in matt black (except for a couple without thermometers).

The thermometer is built into the lid which means that it’s hard to lose it. It has a scale in both Fahrenheit (outside) and Celsius (inside). This goes from 21°C to 110°C in steps of 11°C, with four subdivisions in each step, which is frustrating. In contrast, the Fahrenheit scale is in steps of 20°F, with 5°F steps, betraying Soulhand’s American origins. There’s one further marking, a “red zone” from about 91°C to 96°C (195°F to 205°F) marking the ideal brewing temperature for pour-over.

There’s some confusion in the manual about whether its suitable for gas hobs (it’s designed for use on a range of electric hobs, including induction hobs). However, I used it at home on my gas hob without any issue and on my Dad’s halogen hob. In use, it pours really well, as well as my other gooseneck kettles, and the handle is well-insulated.

While the Soulhand offers some degree of temperature control, don’t expect the sort of 1°C precision I was getting from my Bonavita. Instead, I would typically be looking to get within ±2°C of my desired temperature. In practice, I actually heat the water until the needle is between the 96°C mark (top of the red zone) and 99°C, then I start pouring. If I overshoot, I can let it cool to the desired range by taking it off the heat. In the case of my Dad’s halogen hob, I also found that there was enough residual heat in the hob that if I let it cool too much, I could pop it back on the stove and it would heat up a few degrees.

One potential drawback is the length of time it takes to heat the water. I started by “boiling” 400 ml of cold water in my standard kettle which took one minute. In contrast, my Bodum took 2½ minutes, while the Soulhand took even longer, typically taking 4½ minutes to reach 88°C and 5 minutes to boil (this was on both the gas and the electric hob). At first I thought this would be a problem, but in reality, when I’m making pour-over, there’s so much else to do in terms of set up (weighing the beans, grinding them, rinsing the filter paper, warming the carafe and cups) that as long as I put the kettle on before I do anything else, it’s not an issue.

In conclusion, I’ve really enjoyed using my Soulhand gooseneck kettle. The things I thought I would find annoying have turned out fine, and I really appreciate the built-in thermometer. Compared to either of my previous solutions (my Bodum or using a regular kettle to fill a pouring kettle), the Soulhand is the clear winner, so much so that I’m now wondering whether I should get a second one to use at home!