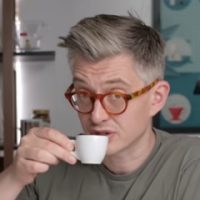 With a very few coffee shops for me to write about at the moment, I am once more searching for meaningful Coffee Spot content. Today’s offering is therefore another first as I turn my attention to the videos of James Hoffmann. Before I go on, it’s worth mentioning that I am not a great fan of video. First and foremost, I am a reader, followed by a listener. Video comes a distinct and distant third. So, how come I’m writing about videos, specifically James Hoffmann’s YouTube channel, in today’s Saturday Supplement?

I’ve known of James for many years (I even met him, once, for about 30 seconds, at a London Coffee Festival: I’m sure he had no idea who I was) and have vaguely been aware of his YouTube Channel for a couple of years. However, I only really discovered it while writing my own Coffee at Home series earlier this year, his videos frequently coming up on internet searches for a variety of topics. At first, I just watched them for research, but as I did, I discovered that I was really enjoying them. Now I am a regular viewer, slowly making my way through James’ back catalogue.

October 2021: James Hoffmann’s YouTube channel has just passed one million subscribers, which, I’m sure you’ll agree, is an amazing achievement (as a footnote, when I wrote this 11 months ago, he was on 620,000 subscribers, so that’s over 30,000 new subscribers a month!).

You can find out why he’s so popular after the gallery.

Before we talk about James Hoffmann’s YouTube channel, a word about the man himself. Although James needs no introduction from me, for those who don’t know him, he is a legend of the UK speciality coffee scene, becoming the first UK winner of the World Barista Championships in 2007 (a feat only repeated twice since, in 2009 by Gwilym Davies and again when Dale Harris won in 2017). The following year, James co-founded Square Mile Coffee Roasters with Anette Moldvaer, where he works to this day. He’s also an author, having written the highly-regarded World Atlas of Coffee.

When it comes to his YouTube channel, James doesn’t need any publicity from me either. While I’m delighted if a Coffee Spot post gets 1,000 views in a year, James’ videos typically get hundreds of thousands of views, with quite a few breaching the one million mark! And he’s getting more popular: in that respect, the COVID-19 pandemic has been good for the channel. In April, James celebrated reaching 250,000 subscribers. As I write this, just seven months later, he has over 620,000 subscribers, a truly impressive growth! Clearly, I’m not the only one who has discovered him during the pandemic!

So, to the channel itself. To start with the obvious, James talks about coffee in his videos, most of which feature him standing or sitting behind a table, usually surrounded by coffee or coffee-making equipment. The production values are very high, with great lighting, sound quality and editing. A typical video lasts between 10 to 15 minutes, although there’s no set length, with some as short as five minutes while others break the 20-minute mark.

The videos can be broadly split into categories such as “how to…” (typically guides on a specific technique or recipe), “reviews” (mostly of equipment, but occasionally of coffee products, like supermarket instant coffee) and “weird coffee science” (covering a variety of topics, including Ultrasonic Rapid Barrel-Aging Coffee and High Humidity Coffee Storage). James also has a very good series on espresso fundamentals and plenty of other, quirky videos that just don’t fit into any neat categories (drinking coffee from the 1950s, anyone?).

While James comes at coffee from the top end of the speciality coffee market, I find his videos, particularly his product reviews, very down-to-earth and practical. Although I started watching for the educational value, what really struck me is just how entertaining James is. He’s really funny, with a dry sense of humour, he’s very honest in his opinions (and quick to correct his mistakes) and his delivery is excellent. Perhaps best of all are the faces he pulls when he drinks coffee he doesn’t like.

It’s hard for me to tell, since I’m very much coming from the same place as James when it comes to coffee, but I suspect that I’d enjoy watching them even if I knew nothing about coffee. As it is, James both entertains and educates me. All told, there are over 200 videos on James’ YouTube channel and he typically adds a couple of posts a week. As well as watching the new content, I’m slowly making my way through the back-catalogue, having got as far back as the start of this year, so I’ve still got loads of videos to go!

Anyway, if you’re not already a regular viewer, check him out and let me know what you think.