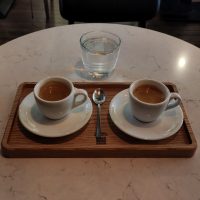 Today’s Coffee Spot is part Saturday Supplement and part Coffee Spot Update. Earlier this year, James Hoffmann went to Milan where he met Enrico Maltoni, who restores vintage espresso machines. One thing led to another, with James buying a 1958 Faema President lever espresso machine, which Enrico restored. Fast forward a few months and the Faema was delivered, in full working order, to London, where James had decided to install it, on a temporary basis, in the legendary Prufrock Coffee, Square Mile’s coffee shop on Leather Lane in Shoreditch.

However, James being James, there was more to it than that. Rather than use a modern blend, like Square Mile’s ubiquitous Red Brick, James and the team at Square Mile developed a limited-edition blend, Il Grifone, specifically designed for the lever espresso machine, with the option of trying it side-by-side with a shot of Red Brick, pulled on the modern Black Eagle espresso machine. All of this was explained in a video that James posted on his YouTube channel two weeks ago. As luck would have it, I was passing through London the following week, so naturally I made my way to Prufrock, my first visit there in many a year.

You can see what I made of Prufrock after the gallery.

Let’s start with the Coffee Spot Update part. I first wrote about Prufrock Coffee eight years ago in 2014. Since then, Prufrock, which always had strong links with the roaster Square Mile, has changed hands, Square Mile taking over the reins. Despite this, Prufrock is a multi-roaster coffee shop, with options from all around Europe alongside Square Mile’s own coffee.

Along with the change of ownership, there have been a few physical changes. Back in the day, Prufrock just had two benches outside and while there’s still not much outside seating, they’ve gone, replaced by three square tables, two to the left of the door, one to the right. Inside, the basic layout is the same, with the counter on the left, set well back from the windows.

The seating has been upgraded, with window-bars flanking the recessed doors, replacing the previous tables. There are two high tables opposite the counter, with a row of seven tables against a padded bench which runs along the right-hand wall. There’s also a row of four two-person tables down the middle, with two booths at the back and a pair of round, two-person tables on the left, tucked into a little alcove beyond counter. However, the biggest difference is that Prufrock now provides full table service, a polite sign greeting you as you enter, requested that you wait to be seated.

Since I’d come specifically to try the Il Grifone, I can’t say too much about the wider Prufrock offering. I did, however, note multiple options on pour-over (Square Mile’s filter blend, plus two single-origins from Barcelona’s Nomad) which these days are made by the SP9 automated system using Kalita Wave filters. There’s also an extensive range of retail bags of coffee for sale, including the Il Grifone, along with several options from Rotterdam’s Manhattan Coffee Roasters.

I bought one of these to take with me to America, along with a bag of the Il Grifone. This ended up being a gift for Lorenzo of Patent Coffee in New York City, while, ironically, the one from Manhattan, which I took around NYC with me for a week, ended up with Bellwood Coffee in Atlanta…

Talking of coffee, let’s turn our attention to the Il Grifone/Red Brick comparison flight, which you can read about after the gallery.

The espresso flight enables you to try the Il Grifone blend, with the shot pulled on the Faema President lever machine, side-by-side with a shot of Red Brick, pulled on the modern Victoria Arduino Black Eagle espresso machine. Your coffee is served in two identical espresso cups, presented side-by-side on a bespoke wooden tray. You have the option of being told which is which beforehand, but I chose to remain ignorant, hoping that I would be able to tell the difference between the two, as well as identify them.

Fortunately, I had no difficulty with the former, the two coffees being quite distinct. They even looked different, one (on the left) having a slightly thinner crema. I gave each a quick stir to see if I could detect any difference in smell (I couldn’t), before starting with the one on the right, which I quickly guessed was the Red Brick

This was the lighter, more acidic of the two, although it wasn’t as bright as I was expecting, given my past experiences with Red Brick. In comparison, what I suspected was the Il Grifone was heavier, more bitter (although not overly bitter) and had a slightly muddy texture. Of the two, I easily preferred what I thought was the Red Brick and, when my waiter returned, my suspicions were quickly confirmed.

Afterwards, I chatted with the barista on the lever espresso machine, who told me it was fairly easy to operate, particularly since Prufrock only uses it to pull espresso shots (there’s a full run down on its operation on James Hoffmann’s YouTube channel). First, the lever is pulled down, which compresses the spring and floods the chamber with hot water, the barista delaying the release for ten seconds (the pre-infusion stage). When the lever is released, the decompressing spring forces the hot water through the ground coffee and, hey-presto, you have espresso! In all, the extraction takes 32 seconds (including the 10 seconds pre-infusion), resulting in 34 grams out (the Faema takes a relatively small 14-gram dose, traditionally the weight of a double espresso shot).

If you’re interested, I ended up drinking the demo shot that the barista pulled. I don’t know whether it was subtly different from the first, or it was because I wasn’t comparing it to the Red Brick, but I enjoyed it more, finding that it lacked the slight muddiness of the first (although I still preferred the Red Brick).

In conclusion, while this coffee experience is not going to be for everyone, it’s been very popular, the staff telling me that Prufrock has been extremely busy since James released his Il Grifone video. If you want to try it for yourself, then the Faema President will be at Prufrock for another five or six weeks, or until the Il Grifone blend runs out.

Of course, I thoroughly enjoyed myself (I’ve always had a soft spot for vintage lever espresso machines), but now I want to try the Red Brick through both machines and see what the Il Grifone tastes like through the Black Eagle…

1 thought on “Il Grifone at Prufrock”