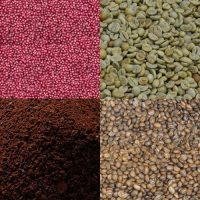 This post was inspired by a recent tweet I saw, which (favourably) compared a decaffeinated coffee with “the real thing”. Now, let’s be clear: if you think that coffee and caffeine are synonymous, that the purpose of coffee is the caffeine, then this post is probably not for you. Frankly, it’s a bit insulting to decaf drinkers, not to mention all the farmers and roasters who go to great lengths to produce amazing-tasting coffee, extracting the maximum flavour from the beans, only to have their products reduced to a mechanism for delivering caffeine.

As James Hoffman pointed out in a recent video on his YouTube channel, if that’s what you’re after, there are far easier ways of getting your caffeine hit than making coffee (caffeine tablets, for example). For me, there’s so much more to coffee, including flavour, aroma and the whole ritual of making/drinking coffee. As I (and others) have written in the past, all this applies to decaffeinated coffee drinkers too, if not more so, since they’re not drinking coffee for the caffeine.

Which brings us back to the tweet. Leaving aside the patronising reference to decaffeinated coffee, what exactly is “real” coffee?

You can find out what I think after the gallery.

Before I start, I’m aware that the word “coffee” is used to mean many different things. For the purposes of this post, I’m talking about the finished product, in terms of the roasted coffee bean which we use to make the drink, coffee.

With that out of the way, let’s start with the basics. Coffee comes from cherries, the fruit of the coffee tree. Strictly speaking, coffee beans are seeds, which you find inside the cherry. The first step, therefore, after harvesting the ripe cherries, is to extract the beans/seeds, which is known as processing. There are three principle methods: washed, natural and pulped natural, but these days, coffee farmers are experimenting with all sort of different processing techniques, often drawing on lessons learned from the wine industry.

However it’s done, processing consists of multiple stages, typically taking two or three weeks from start to finish, during which time the beans undergo some fundamental changes. Over the years I’ve learnt that processing has a profound effect on a coffee’s flavour. For me, it’s one of the first things I consider when I’m looking at a coffee, giving it more weight than, say, its origin or varietal.

At this point, we have green coffee beans, which are still a long way from what you or I would consider “coffee”. If you’ve ever stuck your head in a sack of green beans, you’ll be hit by an intense, vegetal smell. This is very different from the familiar aromas of a bag of (roasted) coffee beans, which are the result of roasting, the process of applying heat to the green beans.

Roasting causes chemical reactions between the acids and sugars in the bean, followed by caramelisation of the sugars, leading to the development of the flavours we are familiar with, as well as the change in colour from green to various shades of brown. There are other physical changes too. First, water vapour is driven off (known as first crack, literally a cracking of the beans as water vapour violently escapes). Then, if you roast for long enough, there’s the second crack as excess CO2 escapes.

As with processing, roasting has a profound effect on a coffee’s flavour, with a dark roast tasting very different from a lighter roast of the same beans. I point this out to illustrate that coffee is the result of a series of very deliberate processes, all of which bring about multiple changes in the beans, impacting their final flavour.

So what about decaffeination? Like processing, there are a number of different decaffeination methods, all of which use solvents (such as water, CO2 and Ethyl Acetate) to remove the caffeine from green beans. In terms of scale, it’s on a par with processing and, while the aim is to remove the caffeine while minimising any change in flavour, it does impact on both the flavour and structure of the coffee bean.

However, given all the processes and chemical changes that happen between cherries being picked from a tree to roasted beans being ground and made into coffee, decaffeination is just another process. I can’t see why decaffeination, uniquely among all the processes, is the one that makes coffee not “the real thing”. Unless, of course, you view caffeine and coffee as synonymous, which brings us back to where we started…

Let’s return to the question we started with: what is “real” coffee? Unless you want to draw arbitrary lines to exclude specific things (like decaffeinated coffee), I don’t think that “real” coffee is a useful concept. What about instant coffee? Is that “real” coffee? Or cold brew? I could argue that they are “real” coffee. Equally, I could argue that they’re not, which makes the whole distinction rather arbitrary. That’s not to say that there aren’t differences between them. Of course there are. And they are very important differences, just as there are differences between filter coffee and espresso, but to claim that one is “real” coffee and another isn’t just makes no sense to me.