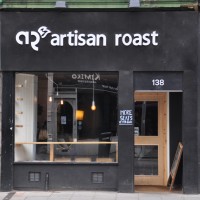 Stepping into Edinburgh’s second branch of Artisan Roast, on Bruntsfield Place, there is a distinct sense of déjà vu. In look, feel and layout, it’s similar to the original on Broughton Street, right down to there being a back room called “The Mooch”.

Bruntsfield Place, which started life in 2011 as a Festival pop-up, is similar in size to Broughton Street, perhaps a little narrower and a little longer. Here the espresso machine is in the back right-hand corner rather than the back left-hand corner, and the passage to The Mooch is similarly reversed, but other than that, the similarity is striking.

What you get, of course, is the same Artisan Roast excellence. Everything is roasted in-house, and all the beans are available to buy. However, Artisan Roast seems to be moving away from the “any bean, any method” model that I first came across at Broughton Street. At Bruntsfield Place, specific beans are tailored to specific methods; during my visit, a Kenyan was on offer through the Kalita Wave filter, a Brazilian through the Aeropress.

Naturally there’s the traditional espresso-based menu, along with tea, hot chocolate and the usual range of cake, plus soup for lunch.

It’s hard not to compare Bruntsfield Place and Broughton Street. For example, the front half of Bruntsfield Place, with its generous window and glass door at the front, feels a lot brighter and less cramped/cluttered than its older sibling. A window bar to your left as you come in has three bar stools. Ahead of you, and on the opposite side of the room, is the rest of the seating: three small tables and a bench with high tables in front of it. On the right-hand side, at the back, a generous open space holds till, cakes, grinders and espresso machine. Just as in Broughton Street, there’s no counter per se, nothing separating the baristas from the customers, just a sense that it’s their space and you shouldn’t just walk in and take photos. Well, not without asking permission first, of course!

To the left, a passage leads to The Mooch. This isn’t quite as cosy as Broughton Street, lacking the log-burning stove and cafetiere light-fittings, but it’s pretty cosy nonetheless. Whereas Broughton Street is square, here the seating is on the right-hand side, a long, padded bench running almost the full length of the wall. This is split into two bays by padded, backless benches, each with its own table, while at the far end, a neat window seat has a third table. Depending on what you consider seating (there are a couple of what could easily be coffee tables with cushions on, suggesting that they double as seats) you could probably squeeze 15 people in. Then it really would be cosy.

The décor is reminiscent of Broughton Street, with old coffee sacks hanging on the walls, although the wallpaper, made from pages of old books, is a new one for me. The benches and tables are wood, with bright-red padded cushions, while the floor is slate-tiled (in contrast to front’s wooden floor). It’s fairly dark, but not gloomy, with the light from the window at the back supplemented by a single floor lamp.

Since I’d recently given Artisan Roast’s espresso drinks a reasonable going-over in the Glasgow branch, I decided to try the Kenyan through the Kalita Wave. The result was a fine cup, which I appreciated even when hot (often with the first two or three sips of a filter coffee, all I get is “hot”; I have to leave it to cool before I actually get the flavour). With the Kenyan, the flavour came through straight away and matured as it cooled. There was a fruity sweetness to it that I really liked and none of the sharpness that I find unpleasant. Back in the day, when I used to make my coffee almost exclusively through a cafetiere, I really struggled with Kenyans and am only just coming back to them.

I paired this with the Tomato and Mediterranean Vegetable Soup. This was lovely, a little spicy, with a reasonable body and came with a two generous slices of good, chunky bread.

Afterwards I chatted with the baristas on duty, Robbie Calvert (who has since moved on to Craft London) and Darryl Docherty (who finished seventh in the UKBCs this year). It was very busy, but I was impressed with their efficiency. Despite the constant requests for coffee, every shot was weighed and they even found time to talk to me!

November 2015: there are four Artisan Roasts in all. The third is on Gibson Street in Glasgow while the fourth opened in March in Stockbridge, Edinburgh.