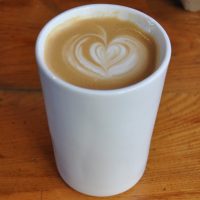 At the northern end of Strutton Ground Market, not far from Victoria Station, is Flat Cap Victoria, a veteran of London’s speciality coffee scene. For the last eight years, from Monday to Friday, it has been turning out top quality espresso-based drinks in all weathers from a lovely barrow, its only protection from the elements, a black, open-sided gazebo.

Flat Cap was set up by co-owners Fabio (of Notes fame), Rob and Charlie, although Fabio and Rob no longer work on the barrow. Despite being co-owned by Fabio, Flat Cap is independent of Notes (for example, there are no links, other than the name, with Flat Cap Borough in Borough Market), although there are close ties, with Flat Caps using Notes Coffee. There’s a single-origin espresso which changes every few weeks, largely depending on what the roastery sends through. If you’re hungry (and there early enough!), there’s a small range of pastries.

I’m embarrassed to say that it’s taken me over four years to finally get around to visiting Flat Cap Victoria. It’s even more embarrassing since I was in the area this time last year and failed to get over to Flat Cap before it closed… My excuse? Well, there are no excuses.

So, when I popped by Victoria Station last week to check out new arrival, Timmy Green, I made sure I left myself plenty of time to call by Flat Cap for an afternoon flat white. About half way along Victoria Street, Flat Cap is pretty easy to find (which just increases my embarrassment at not having been before!), located at the northern end of Strutton Ground Market. Just head south down Strutton Ground from Victoria Street and you’ll soon run into a simple coffee barrow, proud proclaiming “speciality coffee” on the awning.

For a long time, Flat Cap was the only game in town in the Victoria/Westminster area and its role in the history of speciality coffee in London is such that it gets a mention in Phil Wain’s excellent five part history of the capital’s coffee scene. It’s arguable that without Flat Cap, there would have been no Notes, for example.

These days, Flat Cap has been joined by Iris & June, and there’s another barrow, Rag & Bone Coffee, around the corner on Great Peter Street. This is run by Alfie, who spent five years learning his trade at Flat Cap. There’s another connection, Rag & Bone being co-owned by none other than Charlie, along with Alfie and his brother Harry. Alfie usually works at Rag & Bone, with Harry manning the Flat Cap barrow, although they sometimes swap.

Although I’d not met Harry before, I was almost immediately recognised when I strolled up to Flat Cap last week. Well, I say I was recognised. Actually, Harry recognised my Therma Cup, which had featured heavily in my write-up of Rag & Bone last year! Talk about fame (sort of). During my visit, Harry had a Sitio Cordilheiras single-origin espresso from Brazil on, a rather lovely coffee, its natural chocolatey sweetness combining well with the milk in my flat white.

I spent a pleasant half-hour chatting with Harry and Charlie (who was also there). If you’re in the area, do pop by and say hello. They’d love to see you! And serve you some coffee, of course.

December 2017: Flat Cap Victoria was a runner-up for the 2017 Best Takeaway Coffee Award.

Note: this is an edited version of the original, where I’d inadvertently named Harry and Alfie as co-owners of Flat Cap Victoria as well as Rag & Bone. Thanks to Harry for pointing out the error!