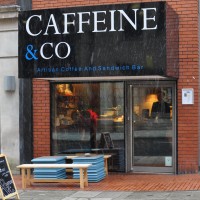 Located in a space that would make a shoe box feel roomy, Caffeine & Co has created a stir since opening in June last year, serving fine coffee, excellent soup, hand-crafted sandwiches and lovely cakes (all baked on the premises) to the good folk of Manchester. Its reputation is aided by the wonderful Dan, who mans the espresso machine and who might be the friendliest and chattiest Barista I’ve ever met, and the equally wonderful Matt, who makes all the sandwiches and cakes. Between them, and the owners, Ann and Phil, they’ve created something which they can be extremely proud of.

November 2015: Dan, the barista who has run Caffeine & Co, took over the shop in his own right in May 2015. You can see what I found when I returned to the renamed Pavé Coffee earlier this month.

November 2017: Caffeine & Co/Pavé Coffee has undergone another name-change and is now Forté Espresso Bar, where I once again caught up with the lovely Dan.

In my head, I think of Caffeine & Co as the Espresso Cube. I’m not sure why: probably because it’s a cube and serves espresso. Okay, I exaggerate. It’s not quite a cube. However, it’s not far off. It’s also tiny. It might only be February, but I know where this year’s Smallest Coffee Spot Award is going (at least, I did until I found I Am Coffee in New York)!

Starting with the basics, Caffeine & Co is essentially square. The door and window take up the shop front, with the counter to the left, while the other two walls are fitted out with a narrow bar and space for about six stools. It would be fair to say that it’s not a place designed for lingering, although I managed to spend about an hour there when I visited! I should also point out that there’s considerably more seating outside, but, as you will see from the photos, it wasn’t a sitting-outside day!

In the short time it’s been open, Caffeine & Co has built itself an excellent reputation. It’s largely defined by its space and its location. Its principle customers, other than wandering Coffee Spotters such as myself, are the local office workers, which explains the opening hours and, while I was there, there was a brisk takeaway trade. Given the clientele and the space limitations, it was be easy for all concerned to just serve some average coffee and mediocre sandwiches, so credit has to go to owners Ann and Phil, who I didn’t meet, and to Dan and Matt, who I did. In fact, it’s probably down to Dan that I was there for so long: I thought I could talk until I met Dan!

It’s clear that while the owners are passionate about their coffee shop, they also trust Dan and Matt to get on with things. Dan is in charge of the coffee, while they keep Matt locked in the basement, where he makes all the cakes and sandwiches. Matt is allowed out for the occasional breath of air, which is when I met him. Between them, Dan and Matt infuse Caffeine & Co with their passion for and joy of making great coffee and food.

The coffee itself is excellent. Caffeine & Co serves Square Mile’s Red Brick seasonal blend (given the space limitations, there’s only the one grinder, so no guest beans and no decaf). My espresso came in a glass, while all the other drinks were served lovely blue cups, very similar to those at North Tea Power and Small St Espresso. Regular readers will know that Red Brick is not my favourite espresso blend: I find it slightly too sweet for my palette, but the one Matt made for me was the best Red Brick espresso I’ve had so far.

I also had a long chat with Matt when he finally emerged from his bunker. His approach to the food, to do a small number of things exceedingly well, was reminiscent of Exeter’s Exploding Bakery and his cakes stood up well in comparison. I only had time to sample the banana, chocolate and nut bread, but it was fantastic. I also had a cup of soup to warm me up and can confirm that it was excellent (and very welcome given the weather).