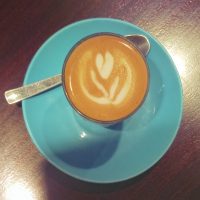 Once upon-a-time in Manchester, there was a tiny coffee shop called Caffeine & Co which, a few years later, changed its name to Pavé Coffee. Since June of this year, it’s gone by the name Forté Espresso Bar. Throughout all this change, one thing has remained constant: the ever-affable Dan, aka the nicest man in coffee, who, barring a short hiatus at the start of the year, when he and his wife had their first baby, has been a permanent fixture behind the counter, although he’s now been joined by the equally-lovely Jenny.

I’m firmly of the opinion that the majority of the customers come as much to see Dan as they do to drink his excellent coffee. That’s certainly the case for me, and I always make a point of popping in to say hello when I come up during my annual pilgrimage to attend the Manchester Coffee Festival.

Talking of the excellent coffee, Forté serves Square Mile’s Red Brick on espresso, with the (in)famous Sweetshop blend as a second option, plus a regularly-rotating single-origin and decaf, all from Square Mile. There’s also tea, hot chocolate, pastries and a range of cakes/tray bakes from Manchester’s In Truffle We Trust.

November 2018: Extremely sad news! Forte has been sold to become a barber shop. I found out when I popped in to say hello to Dan on my annual visit to the Manchester Coffee Festival. It will close by the end of the month 🙁

Forté Espresso Bar is not the sort of place you accidentally stumble upon, which might explain why the vast majority of the customers are regulars. However, don’t let that put you off, since it’s well worth the effort to track it down. Located in the tight grid of streets to the west of Manchester Town Hall, don’t be misled by the address: St James’s Square is the most street-like square I’ve ever come across (don’t tell anyone, but it’s really just a street), with Forté located at the southern end, near the junction with John Dalton Street.

Forté is, effectively, a cube, with windows at the front and a glass door on the right. Indeed, in my head, I’ve always thought of it throughout all the name changes as the Espresso Cube. One day, Dan and co will see sense, change the name and just be done with it… Inside, the counter is on the left, tucked away under a staircase which intrudes from elsewhere in the building, while the only seating is provided by handful of stools scattered along a narrow bar which runs around back and right-hand wall. It’s a really cosy space and you can’t help but chat with either Dan or your fellow customers. Or both.

There’s more seating outside than there is inside. In an optimistic move for Manchester, a pair of tables, complete with benches, sits outside the window. Meanwhile, off to the right, there are another two benches, this time with three tables. These perch at a ridiculous angle on the steeply-sloping street. If I was sitting there, I’d be tempted to glue my cup to the table to stop it sliding off…

Other than visiting the ever-cheerful Dan and the equally-lovely Jenny, the main draw is the coffee, which is from London’s Square Mile. In the past, I’ve always stuck with the ubiquitous Red Brick seasonal blend, but this time Dan tempted me to try the Sweetshop, another seasonal blend, which he recommended as a cortado.

Now it’s fair to say that I have some history, shall we say, with Sweetshop. In my early days of writing the Coffee Spot, when I was much more of a traditional espresso drinker, I struggled a bit with Red Brick, while I positively hated its more far-out cousin, Sweetshop. These days my tastes have evolved and I thought it was about time that I gave Sweetshop another go.

A 50/50 blend of two Ethiopian coffees, one naturally-processed and the other washed, Sweetshop’s current incarnation is a rich, fruity, complex coffee. Dan was right to recommend a cortado: I think on its own, Sweetshop would have been too much for me, the sort of espresso that I describe as a “punch in the mouth”. The milk, however, takes the edge off the flavours that I fear would otherwise overwhelm me and the result is a very interesting drink. The milk and coffee are never quite in harmony, each battling for supremacy. By the time I reached the bottom of the glass, the two had reached an uneasy sort of truce, leaving me to savour its complexity. It’s the sort of coffee that, I suspect, will taste slightly different each time I have it. While it will never be my go-to drink, I really enjoyed the change.

If you’re interested, take a look at the original Caffeine & Co Coffee Spot, which includes the original write-up and gallery, while you can also see what I made of Forté’s incarnation as Pavé Coffee.