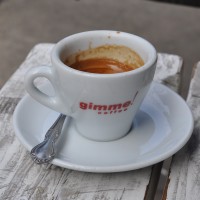 Gimme! Coffee is both a roaster and a regional coffee shop chain with four branches in upstate New York, two in Brooklyn and the solitary branch in Manhattan on Mott Street. It’s been around since 2000, while the Manhattan outlet opened in 2008, making Gimme! Coffee a comparatively long-established player in the New York coffee scene (unless you compare it to somewhere like Caffé Roma!).

The Manhattan branch is essentially a takeaway place, although I got lucky with the weather and had a chance to sit outside while savouring my espresso. At a pinch, you could stand inside and drink your coffee, but when I tried that (while chatting to the staff) I found that I was constantly getting in the way of other customers.

For somewhere so small, Gimme! Coffee packs a lot in though, including bags of charm and character. As a result, instead of just being somewhere to grab a coffee to go, it’s established itself as a real asset to the neighbourhood. It’s the sort of place I’d make a point of going to if I lived in the area, even if it was only for a couple of minutes a day.

July 2022: Gimme! Coffee is now a cooperative and still going strong in Ithaca.

I wonder if I would have enjoyed Gimme! Coffee as much had I brought the New England weather with me (snow, gale-force winds). However, on a mild, spring day in New York, and with the sun shining, I really liked sitting outside Gimme! Coffee on its solitary bench, drinking my (double) espresso. There is also a box-seat surrounding the tree on the opposite side of sidewalk, but even so, it’s fair to say that seating is not Gimme! Coffee’s strong point.

It is a tiny spot, which was vying with Manchester’s Caffeine & Co for the 2013 Smallest Coffee Spot Award until I hit I Am Coffee later that day. Despite its size, Gimme! Coffee packs an awful lot in, offering the obligatory drip filter and a fairly standard espresso range. The really impressive thing is that it also offers a Clever dripper (the Clever, for the uninitiated, being a clever sort of cafetiere). All the beans are roasted in upstate New York in a renovated barn and all 13 single origin beans and five blends are for sale, along with coffee-making equipment. Gimme! Coffee even has a restroom, pretty impressive for a place so small that I could almost touch both walls with my arms outstretched.

The bulk of Gimme! Coffee is taken up with the counter. There is some space by the window to wait for your coffee, with the obligatory flasks of milk and sugar, which makes for some interesting shuffling around if you are waiting while wearing a moderately-sized rucksack and carrying a camera bag (guilty). Along the right hand side, opposite the counter, there’s enough space for people to queue before ordering.

Unsurprisingly, Gimme! Coffee’s trade is predominantly takeaway. However, I was joined outside on the bench by a couple of people (neither of whom lingered) and a young lady who sat on the box-seat opposite reading on her Kindle (other e-readers are available). It did a pretty brisk trade while I was there and, as well as the coffee, there’s tea and a surprisingly large range of cookies, pastries and doughnuts (donuts?).

I had a fairly involved discussion when I ordered my espresso which is worthy of a Coffee Spot post in itself. However, it can be summarised as follows: when the menu offers espresso with no size specified, just order it and don’t argue about what constitutes a single or double! It could also be summed up with the mantra: if in doubt, trust the barista, the corollary of this being if you can’t trust the barista, it’s probably not a very good coffee shop anyway. After all that fuss, the resulting espresso was worth it: short, strong and exactly what I wanted, if slightly too fruity for my tastes.

Since Gimme! Coffee only offers the one-size shot, this makes its lattes and cappuccinos pleasingly small (and only available in one size). This is one of an increasing number of places in America where you are not going to walk out in possession of a bucket of milk with a dash of coffee in it.

At the end of the day, I really liked Gimme! Coffee. I’m not sure what I would have made of it on a snowy or rainy day, but no doubt I will find out when I come back next year. You can also see what I made of Gimme! Coffee’s Roebling Street branch in Brooklyn which I visited in 2016.