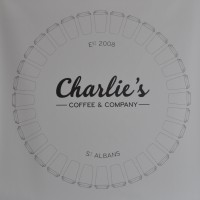 Every now and then I come across the sort of coffee shop that the Coffee Spot was created to write about. Such it is with Charlie’s Coffee Shop, the indoor half of Charlie’s Coffee & Company. The other half is Charlie’s beloved coffee van which you can still find at Platform 4 of St Albans (City) Station, but only if you’re willing to get up far earlier than I am!

Charlie’s Coffee Shop has much more Coffee Spot friendly hours, opening at the civilised time of 11.30 during the week (this is to give Charlie time to get down from the station after her early morning stint in the van), with an 8:30 – 12:30 slot on Saturday (when the van has the morning off).

The shop itself is a delightful little place, set back from the busy London Road at the end of a little row of shops. Despite its size, there’s a decent espresso-based menu, centred on Charlie’s own bespoke blend from Staffordshire’s finest, Has Bean, plus Has Bean’s decaf blend. There’s also a range of loose-leaf tea, hot chocolate from London legends, Kokoa Collection, with a lovely selection of pastries and cakes, plus coffee-making kit for sale.

Charlie is someone I’ve wanted to visit ever since starting the Coffee Spot. The only problem is, she runs a three-wheeled Piaggio coffee van at St Albans station that closes before I usually get up in the morning… Then, in the spring of this year, Charlie opened her shop on St Albans’ London Road, a little way south of the centre, not far, in fact, from the station. This, I thought, was my chance…

There’s something about Charlie’s that struck me as I approached it from the station. Even if I hadn’t been looking for it, it would have stopped me in my tracks. Set back from the street, with its own little paved area, it set my Coffee Spot radar off immediately. There are a couple of low outside tables with stools, while Charlie’s itself is beneath a low brick arch mounted on two brick pillars. This immediately gives it an open, welcoming feel; very much, what-you-see-is-what-you-get.

Stepping inside, the shop itself runs the width of the arch and is perhaps twice as deep. On the left are two two-person tables, no more than shelves mounted against the wall, while on the right, there’s a narrow bar with four bar-stools. At the back, running the width of the store, is the counter, the dominant feature in the shop.

This takes up about half the available space, making, to me at least, a bold statement about just how important the coffee is. In what was already a small space, you have to be pretty serious about your coffee (and Charlie is) to give over 50% of your floor space to making it!

Despite its relatively small size, Charlie’s feels a lot bigger than it is. This is partly due to the counter and partly due to the light. Windows take up the whole front of the store, with another at the back, behind the counter. The whitewashed walls and ceilings just add to that feeling of space and light.

Little wooden menus hang off the tables, presenting a pared-down coffee menu (espresso, espresso with milk and espresso with more milk). I started off with an espresso that came in a lovely handle-less, black, earthenware cup with its own glass of water. It was a little sour for my tastes, but not too sharp, very much front of the mouth and nice and smooth. I followed it up with a piccolo, which, as I suspected, was lovely, the milk counteracting the slightly sourness, making it a great drink. I paired these with the world’s largest almond swirl, definitely the king of pastries, and almost a meal in itself!