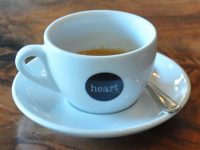 Heart Coffee Roasters is one of many coffee shops/roasters based in Portland, Oregon, but, after Stumptown, it’s probably the one that the most people on this side of the Atlantic have heard of. It was certainly very high on my list during my brief visit to Portland as part of my coast-to-coast trip last June, so I thought it was about time it featured on the Coffee Spot.

There are two Heart coffee shops in Portland, one on the west side, and this, on the east side, on East Burnside, right in the middle of the vast grid of residential streets on the eastern bank of the Willamette River. As well as being a coffee shop, this was also where, for many years, all of Heart’s coffee was roasted. However, the old Probat roaster was retired shortly before my visit due to Heart moving its growing roasting operation to a dedicated facility nearby.

The result, when I was there, 11 months ago, was a coffee shop in flux, so there may well have been more changes since my visit. However, what I found was a delightful, spacious, sunny spot, serving some excellent coffee, amongst the best of my entire trip.

Heart’s in a rather anonymous, black strip on one of the main arteries heading east out of Portland. You can sit outside at one of several tables, but there’s far too much traffic for my tastes. The interior’s by far the better choice, a lovely, large, high-ceilinged, rectangular space, with a quiet, relaxed atmosphere, which must have been quite a contrast to when it was roasting all the time! Although relatively narrow, spanning just two windows and a (glass) door, it goes back a long way, high ceilings adding to a sense of space. The natural light from the south-facing windows/door is supplemented by several skylights in the back, while there are also plenty of lights.

You enter on the left, where a long high-backed bench-seat runs for maybe one-third of the depth of the store. With its back to you, it acts as an effective barrier, funnelling you past the seating and towards the counter, which is at the back on the right. Meanwhile, ahead of you against the left-hand wall, are two tables, one three-person, one five-person, behind which is shelving with merchandising, coffee-making kit and numerous beans for sale.

The counter runs along the back wall, cake first, then till, espresso machine and three grinders, before swinging around to the right, where it terminates at the roaster. When I visited, Heart had just moved to its new roasting facility, the old Probat reduced to limited use (it may now have gone altogether).

Beyond the roaster is the remaining seating, starting with an eight-person communal table between roaster and window. The middle window has a four-person window bar, then comes the aforementioned bench, two-person tables at either end, a longer, six person table in the middle. Finally, there’s a low, quarter-circle bar with five seats which effectively segregates the seating area from the roaster.

Heart was consistently mentioned by coffee people in Portland as roasting a shade or two lighter than anyone else. Typically Heart has six to eight single-origins at any one time, with a blend, a single-origin and decaf all available on espresso, another single-origin on bulk-brew. Typically the single-origins rotate every few days, but it depends on the batch: some don’t even last the day before being replaced!

I tried the single-origin espresso, an Ethiopian Dabub Matebya. Heart has a lovely Kees van der Westen espresso machine (still quite rare in America) and my shot was pulled into small cup, then poured into larger cup for serving, the first time I’ve seen that happen. It came with a small glass of sparkling water, a little touch I appreciated.

However it was made, it was a lovely coffee, proving to be very smooth, especially on the first sip. It was the second Ethiopian espresso I’d had in Portland, the first coming at Case Study. This wasn’t quite as rounded, but was still very well balanced. There were more fruity notes on the second sip, and the final mouthful was even fruitier, making me pull a face. It’s rare that I find an espresso which varies so much in taste through the shot.

Keen to see how it stood up in milk, I had it as cappuccino (a pleasingly small 5.5 oz). It went even better in milk and was incredibly smooth, the sweetness of the milk blending harmoniously with the fruity notes of the coffee.

I paired my cappuccino with a chocolate and banana muffin. This was very moist, with a great texture, and was incredibly chocolatey. There wasn’t much banana, but every now and then a chunk snuck past the chocolate to surprise me! Divine!