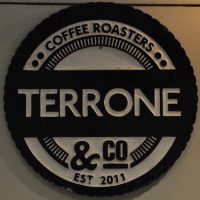 You can see if I found him after the gallery.

Kingly Court is a wonderful setting, with the courtyard, open to the elements in the summer and covered in the winter, providing plenty of seating. Sottoscala itself, a collaboration with Pizza Pilgrims, is a pretty small place, perhaps twice the size of Newcastle’s Hatch Coffee. It’s tucked away to the left of Pizza Pilgrims and is actually part of the same space, although technically it’s a separate business, with Pizza Pilgrims serving its own coffee. However, that doesn’t stop customers sometimes ordering coffee from Sottoscala, nor does it stop them popping out the front door, heading around the corner and ordering one like the rest of us.

Sottoscala, by the way, is Italian for “under the stairs” and can sometimes be translated (well, by Google Translate at least) as “cupboard”, both of which are accurate descriptions of Sottoscala! Immediately to the left of Pizza Pilgrims is a flight of stairs which leads up to the first and second floors. As it doubles back on itself, it leaves a little covered area next to the corridor which connects the courtyard to Kingly Street. Into this unpromising space, Sottoscala has inserted itself.

Approaching from the courtyard, Sottoscala forms its own little corridor. There are three small, square tables alongside two benches to the right, while on the left, a bar with three bar chairs provides more seating. And, of course, you can always take your coffee and sit in the courtyard itself. Right at the back, there’s a narrow counter where you order, a sliding glass window opening onto Sottoscala itself. To the left, there’s the two-group La Marzocco and its grinder, while to the right, you can see through to Pizza Pilgrims itself.

So, was Edy there? In a word, no. Sottoscala is run by Rachel (Monday to Thursday, and who also bakes the cakes) and Andrea (Friday to Sunday). I was there on a Saturday, so got to meet Andrea, who I’d previously met at the London Coffee Festival. Sottoscala has a concise coffee menu, offering the usual espresso-based standards, and while there’s an option of a V60 or Aeropress, this isn’t currently available. There’s also a limited selection of non-coffee drinks, tray bakes and cookies.

Sottoscala offers a single option on espresso which changes monthly, either Terrone’s seasonal Calista Blend, or one of its two single-origins (Ethiopian or Rwandan). While I was there, the Rwandan was in the hopper and Andrea pulled me a beautiful shot, so fruity and well-balanced, the sort that’s so good that it deserves a proper cup. Fortunately, I’d brought along my Kaffeeform cup, made from recycled coffee grounds, although I later learnt that Sottoscala has a stash of Inker china cups, that, like Edy, are sometimes rather elusive…