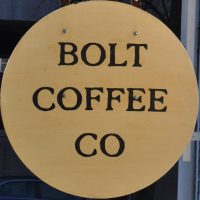 Slowly but surely, hotel coffee is improving, particularly in the USA, where speciality coffee shops in hotel lobbies seems to be increasingly a thing. Now, joining the likes of Stumptown in the Ace Hotel and Intelligentsia in the High Line Hotel in New York City, we have Bolt Coffee in the lobby of Providence’s Dean Hotel. It was on my list during my first visit to Providence in the summer of 2015, but I ran out of time and it was only on my return earlier this year that I finally made it.

As coffee shops go, Bolt is fairly small, set back behind the lobby and with its own entrance direct from the car park. There’s a small counter at the back, a communal table in front of that, and then a square of seating consisting of a pair of sofas, a bench and a couple of armchairs, all arranged around a large coffee table.

What it lacks in size it more than makes up for in coffee, with Seattle’s Kuma Coffee providing the beans. There’s a blend on espresso, joined by a single-origin on bulk-brew and two more on pour-over, through either the Kalita Wave or Clever Dripper.

Although speciality coffee shops are making an appearance in UK hotels (Small Batch on Brighton’s Jubilee Street and Bulldog Edition in Shoreditch spring to mind) I only seem to visit American ones. Bolt Coffee is the latest, in the lobby of the Dean Hotel on Fountain Street, downtown Providence. It has its own entrance from the hotel’s car park, so you wouldn’t necessarily know that you were in a hotel, although you can also enter via the front door, and, if you’re a guest, you can come down directly from your room.

Bolt occupies a simple space, its refined look enhanced by white-painted walls and ceiling. There’s a sense of space, helped by several large mirrors, but the icing on the cake is the gloriously-tiled floor with its geometric patterns. Entering from the car park, the counter’s to your right, with the seating on the left. Alternatively, coming in through the hotel, a short flight of steps leads up to a corridor which heads through to the back of the hotel, going directly past Bolt on the right, starting with the seating before reaching the counter at the back.

The main seating area is square, centred on a large, low coffee table. There’s a padded bench-seat against the right-hand wall and opposite that, backs to the corridor, are two armchairs. The other two sides have a large sofa each, facing each other across the coffee table. Between this seating area and the counter is a long, eight-person communal table, running parallel with the counter.

On the left-hand wall are two large mirrors, one opposite the seating, the other opposite the counter. Each has a low, old-school exercise horse in front of it which could double as seating, while a stepladder between two mirrors serves as a newspaper stand. A further mirror occupies the back wall behind the counter, all slightly disconcerting for those who do not like looking at themselves!

Most of the light comes from a bank of spotlights over the seating area, plus two large lamps which hang above the table, although there is some natural light from the door to the right.

During my visit in February, the coffee was from Seattle’s Kuma Coffee, although the barista said there were plans to introduce guest roasters. The counter is uncluttered, with the coffee equipment relegated to the back. There’s a single-group La Marzocco G3, its grinder and the obligatory bulk-brewer to the left, while to the right is the boiler for pour-overs.

I had this standing up at the counter, chatting with the barista, in a very Italian manner. Wanting something to linger over, I opted for a pour-over, the barista recommending the Colombian Esperanza through the Clever Dripper. Unusually for America, this was served in a carafe with a cup on the side; I approve!

It turned out to be a very mellow, well-balanced coffee, which evolved and matured as it cooled, more flavours coming through until it reached its peak when almost cold. Quite superb!

2 thoughts on “Bolt Coffee at the Dean Hotel”