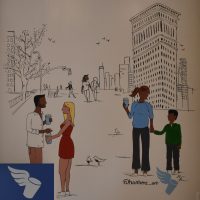 Today’s Saturday Short is unusual on three levels. Firstly, it’s a New York City coffee shop which isn’t a coffee shop/roaster. What’s more, it’s using an out-of-state roaster, Providence’s Bolt Coffee, rather than one of the usual suspects from Brooklyn. Thirdly and finally, it has the rare distinction (for this trip) of being somewhere I found myself rather than a recommendation from Bex of Double Skinny Macchiato.

Marathon Coffee is a fairly new chain of three coffee shops and, for once, I visited the original, which is on 6th Avenue, half a block from my hotel and on my way to the office, which is how I discovered it, popping in for a flat white on my last day. “Popping in” is the correct term by the way, since Marathon is small, with just the counter and no seating.

Bolt Coffee’s Seven Hills blend is on espresso, while there are two bespoke house blends (also roasted by Bolt) on batch brew, along with a range of seasonal specials and hot teas. Marathon has breakfast tacos from Uptaco (available until they’re all gone) along with a selection of cakes and pastries. Since it’s takeaway only, don’t forget to bring your own cup.

I walked past Marathon Coffee, which is on 6th Avenue, just down from its junction with 26th Street, on my first day, making a mental note that it looked promising. However, such are the riches of Midtown’s speciality coffee scene that it wasn’t until I was on my way to the office one last time that I checked it out.

I knew nothing about Marathon, but seeing Bolt Coffee on the shelves reassured me. I have fond memories of Bolt’s coffee bar in the Dean Hotel in Providence, so it was nice to see Bolt in New York City. It was very much a grab-and-go visit that morning, but I made a longer stop the following day, which is when I learnt that Marathon had opened on 6th Avenue in 2020, adding a second shop on the Upper East Side in 2021 and a third over on 1st Avenue, which opened this week.

Marathon is on the west side of 6th Avenue, presenting a modest, all-glass front with a recessed central door. Inside, it occupies a generous space, with the counter at the back, slightly offset to the left, leaving space on the right for a takeaway station, built into a recess in the wall. Meanwhile, on the left, the wall is home to a large menu board with a single retail shelf below. This holds bags of the two house-blends (Marathon Coffee 1, a mix of Honduran and Ethiopian beans, and Marathon Coffee 2, a Guatemalan/Honduran blend) along with Bolt’s Seven Hills espresso blend. Bolt is a recent addition, by the way, Marathon having made the switch in April this year.

The counter is all business, a display case for the cakes/pastries and tacos in the middle, a fridge for cold drinks on the left and the tea menu on the right. Additional menu boards are on the wall above/behind the counter, while the coffee itself is on the back wall, with the batch brew on the left and espresso on the right, the Faema E71 espresso machine tucked away in the corner.

I had the Seven Hills on both my visits, first as a flat white in my HuskeeCup, then as an espresso in my Kaffeeform cup. It’s a classic, all-round blend, combining very well with the milk in my flat white to produce a rich, sweet drink with chocolately notes. Meanwhile, it did just as well on its own, displaying the same well-rounded nature. I would have liked a third visit to try the bespoke filter blends, but, alas, time was against me.